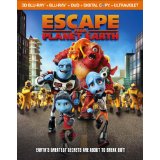 On the Fourth Day Of Christmas Anchor Bay  gives to you:

A little trip into the 3rd Dimension. Our wonderful buddies over at Anchor Bay have given us a copy of Escape From Planet Earth on Blu-ray 3D for one lucky Upcomingdiscs winner. It’s a nice animated feature that you can share with your entire family. It features the voices of Jessica Alba, George Lopez and Jane Lynch. This set includes the 3D Blu-ray, standard Blu-ray and a DVD copy. Remember that you need a 3D player and capable television in order to see the film in 3D.

Gino Sassani is a member of the Southeastern Film Critic's Association (SEFCA). He is a film and television critic based in Tampa, Florida. He's also the Senior Editor here at Upcomingdiscs. Gino started reviewing films in the early 1990's as a segment of his local television show Focus. He's an award-winning recording artist for Omega Records. Gino is currently working on his 8th album Merchants & Mercenaries. Gino took over Upcomingdiscs Dec 1, 2008. He works out of a home theater he calls The Reel World. Favorite films: The Godfather, The Godfather Part II, The Body Snatcher (Val Lewton film with Karloff and Lugosi, not the pod people film), Unforgiven, Gladiator, The Lion King, Jaws, Son Of Frankenstein, The Good, The Bad And The Ugly, and Monsters, Inc.
12 Days Of Christmas – Day Three: 2000 Yankees World Series Collectors Edition From A&E 12 Days Of Christmas Giveaways – Day 5: Dick Figures the Movie From New Video Group