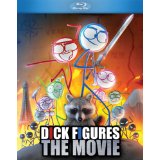 On the Fifth Day Of Christmas New Video Group  gives to you:

Who would have thought that stick figures could be so much fun. You heard us talk about them as our last minute gift idea. Now you have a chance to win one for yourself. New Video Group has slid a copy of Dick Figures The Movie under the Upcomingdiscs Christmas Tree. We figure we get enough free stuff for ourselves. After a short executive meeting of the top brains here at Upcomingdiscs we decided the goods go to you. Journey with Red and Blue as they search for the Sword Of Destiny…and a birthday present for Pink.

Your answer will not in any way alter your chances to win. (It’s all random). You just must have an answer.

Gino Sassani is a member of the Southeastern Film Critic's Association (SEFCA). He is a film and television critic based in Tampa, Florida. He's also the Senior Editor here at Upcomingdiscs. Gino started reviewing films in the early 1990's as a segment of his local television show Focus. He's an award-winning recording artist for Omega Records. Gino is currently working on his 8th album Merchants & Mercenaries. Gino took over Upcomingdiscs Dec 1, 2008. He works out of a home theater he calls The Reel World. Favorite films: The Godfather, The Godfather Part II, The Body Snatcher (Val Lewton film with Karloff and Lugosi, not the pod people film), Unforgiven, Gladiator, The Lion King, Jaws, Son Of Frankenstein, The Good, The Bad And The Ugly, and Monsters, Inc.
12 Days Of Christmas Giveaways – Day 4: Escape From Planet Earth 3D Blu-ray From Anchor Bay Mike Birbiglia: My Girlfriend’s Boyfriend