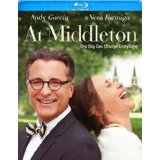 “Sometimes a day can be an eternity.”

The film quickly introduces us to two very different parents as they drive their respective kids to a campus tour of fictional Middleton College. (Gonzaga University and Washington State University split the role of Middleton.) George Hartman (Andy Garcia) is an uptight, fastidious heart surgeon accompanying his son Conrad (Spencer Lofranco), who isn’t particularly interested in attending Middleton and regards the necktie his dad forces him to wear as if it were a noose. Edith Martin (Vera Farmiga) is more of a free spirit and is accompanying her daughter Audrey (Taissa Farmiga), who is obsessed with attending Middleton so she can study under a renowned linguistics professor.

George and Edith don’t exactly “meet cute”; they first lay eyes on each other during a parking lot dispute. Still, when they each get separated from the tour, they decide to explore the Middleton campus on their own. The result is a series of episodic mini-adventures as George and Edith — who are each married, by the way — start to fall in love with each other.

As I said before, it’s really hard to sell an audience on a romance that’s supposed to blossom over the course of a few hours. So you can probably forgive director/co-writer Adam Rodgers for using a bit of storytelling shorthand. (For example, you can tell George is uptight and fastidious because he wears a bowtie.) Still, the script — co-written with Glenn German — and the actors find a variety of lovely character moments that reveal why George and Edith are unfulfilled in their respective lives. The film also features funny throwaway bits with some of the college student characters. These include Nicholas Braun nailing the canned charisma of a college tour guide, and Kenny Parks Jr. as a hopelessly stressed-out music major.

George and Edith end up borrowing a pair of bicycles, climbing one of the campus’s bell towers, dueting on a piano, and (in the movie’s most dramatic, revelatory scene) crashing an acting class. Their antics are purposefully a little on the childish side, but George and Edith’s growing connection is reminiscent of the Ethan Hawke/Julie Delpy/Richard Linklater Before trilogy. And the film’s last few moments are affecting and unabashedly romantic. However, there’s too much disposable material in between that prevents At Middleton from becoming the terrific little cinematic romance it could’ve been.

The biggest offender is an extended, unnecessary sequence where George and Edith get high with a couple of college kids in a dorm room. I wasn’t offended because I don’t care for drugs; I was offended because these scenes killed the movie’s momentum.

Meanwhile, the official campus tour that Conrad and Audrey stuck to ends with about an hour left in the movie. Unfortunately, the script strains to give them anything interesting to do. At least Lofranco gets to have some fun moments with Peter Riegert as a hip college radio station DJ. The younger Farmiga, unfortunately, winds up with the shrill end of the stick, as Audrey’s session with her beloved linguistics professor (Tom Skerritt) doesn’t go as planned. (Vera and Taissa Farmiga play mother and daughter here, but in real life are sisters who are 21 years apart in age.) For a few moments, it looks like Conrad and Audrey are going to connect, but their stories don’t really click, either separately or together.

Fortunately, the same can’t be said for George and Edith. On paper, Garcia — the suave Cuban-American actor who earned an Oscar nomination for his explosive turn in The Godfather: Part III — is a terrible choice to play George, who is basically a dweeb. Watching the actor do a Charlie Chaplin-style dance in the middle of a druggy haze is amusing, even if it’s not convincing. The actor really shines when he taps into George’s inner fear of having settled for a decent, unfulfilling life. Vera Farmiga, on the other hand, can’t help but glow whenever she’s on screen. (Even when she’s revealing Edith’s own pain.) It’s a good thing too, because the brash character really could’ve been off-putting in the hands of a less capable performer. The actress is terrific (as usual) and really elevates what is essentially a more grown-up version of the Manic Pixie Dream Girl.

Throughout the film, George repeatedly uses the line, “it’s not small, it’s intimate.” The phrase is meant to defend the modest Middleton campus, but I believe it also applies to this movie. In fact, I wish the story had been even more intimate. (Translation: cut down on the kids’ screen time, and ditch the goofy drug interlude.) At Middleton is a really good movie that eventually loses its way for a while, before coming out ok on the other side. In that way, I suppose it really does capture the collegiate experience.

At Middleton is presented in an aspect ratio of 1.78:1. The 1080p image is arrived at with an AVC MPEG-4 codec at an average of 23 mbps. The highly-pleasing HD presentation from Anchor Bay does a better job extolling the virtues of the film’s fake school than any tour guide ever could. This is a perpetually warm, sunny image, while remaining natural and grounded. (Farmiga’s icy eyes pop even more than usual as a result.) Since the film takes place over the course of one day, I enjoyed seeing how cinematographer Emmanuel Kadosh used light to convey the different times of day. (One shot toward the end uses the setting sun to beautiful effect.) Even black levels are impressively deep during the pivotal acting class scene. A few stray medium shots do look a bit softer then the film’s clear, noiseless baseline image. Overall, this Blu-ray makes college look so good, it made me think about re-enrolling.

The Dolby TrueHD 5.1 track serves the dialogue very well, which is its main purpose here. I wasn’t surprised to hear ambient sound pouring through the rear speakers since a good chunk of the film takes place outdoors. However, I do wish that the stuff we heard was a bit more dynamic. Instead, we get a somewhat generic mix of singing birds and unintelligible background chatter. The result is more “white noise” than “immersive college campus.” (The exception is the emphatic authority courtesy of the bell tower.) Composer Arturo Sandoval’s score also gets to shine in this well-balanced, exceedingly serviceable track.

Audio Commentary with writer/director Adam Rodgers, writer/producer Glenn German and actor/producer Andy Garcia: This is where we learn that Garcia’s involvement (and his connections) is really what helped this modestly-budgeted movie get made. You can also tell from this chat that the trio collaborated all the way through the film’s post-production process. It’s an easy, occasionally chummy chat that offers some useful tips for anyone wanting to make a movie on a meager budget.

Outtake Reel: (11:09) Although it’s longer than the typical gag reel, you get the same set of flubbed lines and bleeped-out curses. The difference is the inclusion of extended riffs from actors like Braun, who clearly enjoyed ad-libbing some of his material as the tour guide.

“There Was a Day” Music Video: (4:25) It’s not technically a music video, since we get a series of stills from the film as Garcia croons over a track produced and arranged by Cuban jazz trumpeter Sandoval. (Garcia previously played Sandoval in the acclaimed TV movie, For Love or Country: The Arturo Sandoval Story.) As for the song itself…let’s just say it’s a good thing Garcia is still able to make a living as an actor and doesn’t have to rely on his singing.

If live-action feature films didn’t have to be at least 80-90 minutes long — and At Middleton could’ve focused exclusively on George and Edith once they get separated from their kids — the movie might’ve been onto something special.

Instead, the final product is a lovely adult romance that — like its characters — will mostly leave you thinking about what could’ve been.