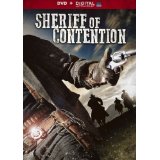 When it comes to the very worst movies I’ve ever seen, I admit that I grade on a curve. Filmmakers working with extremely limited resources get more of a pass from me. This certainly appears to be the case with Sheriff of Contention, a low-budget Western/serial killer mystery. Unfortunately, there’s only so much amateurish acting and technical mishaps I can overlook. Everyone knows that if you can’t say something nice, you’re not supposed to say anything at all. In a related story, this might end up being one of my shorter reviews.

Tom Peavy (Angelo Ortega) is the sheriff of Contention City, a real-life historical mining town in Arizona. The only thing I liked about this movie was its cool title, but the filmmakers squandered the story’s potentially-interesting backdrop. Instead, Sheriff Peavy and the trigger-happy Deputy Conley (Miguel Corona) try to catch an unknown killer who is targeting the women of Contention City. That includes Melissa (Wendy Wiltsey), the local gal who is very obviously sweet on Sheriff Peavy. There’s also the matter of the city’s shifty mayor (Nick Bonacker) encouraging the more aggressive Deputy Conley to assume the role of sheriff, despite the fact that the position is currently occupied.

At least, I think that’s what the movie is supposed to be about. I can’t be entirely sure because Sheriff of Contention is burdened with the worst editing I’ve ever seen. The entire movie was littered with abrupt, choppy cuts that routinely interrupted the actors before they finished saying their lines. You know when you’re watching a videogame cinematic/cutscene, and you press the action button to skip ahead? That’s what watching this movie felt like. And when the action wasn’t inexplicably jumping all over the place, we got sequences that went on and on for an excruciatingly long amount of time.

This is the kind of bad movie where the awful acting is actually the least of its problems. The hopelessly wooden Ortega is probably the worst actor in the film, so naturally he’s cast as the lead and appears in practically every scene. The award for Best Performance is a three-way-tie between Bonacker (as the devious mayor), Deputy Conley’s mustache, and a dog who randomly appears in a bar scene and is mistaken for a woman(?!)

Director Tom O’Mara — who pulls double duty as the town doctor/town drunk — apparently didn’t have a lot of leeway when it came to camera placement or movement. Many shots are distractingly static, and it’s often difficult to see the actors’ faces. I also don’t ever recall having to stare at the backs of so many people’s heads while watching a movie. It should go without saying that the action sequences are laughable, but I suppose I just went ahead and said it anyway. The fact that Sheriff of Contention is presented in a full screen ratio only adds to the feeling that we’re watching someone’s cheap-o home movie.

The look of the film is bad, but the sound is equally atrocious. It’s obvious that the production didn’t have adequate sound equipment (or access to ADR) because sometimes it’s almost impossible to hear dialogue during crowd scenes. (The sound is also unbalanced when one character is in the foreground, while the other is in the background.) Then again, I’m not really sure I should be complaining that the dialogue is hard to hear. Some scenes are so awkward that it feels like the actors are improvising (badly). The script — allegedly, there’s a script — was written by Sam Fidler and features non-sequitur gems like the following exchange.

Of course, most of this could be overlooked if Sheriff of Contention told a compelling story. Although the identity of the killer turned out to be somewhat of a surprise, the movie still clocks in at an unnecessarily bloated 101 minutes. Unfortunately, by the time the killer is revealed, the film’s overwhelming, all-encompassing badness has almost certainly forced you to mentally check out. I actually like the idea of fusing the “serial killer mystery” and “Western” genres. Unfortunately, the amount of ineptitude on display here at every level is simply too hard to ignore. Unless you’re looking for some unintentional comedy, skip the trial for this one and march it straight to the gallows.