Posted in: Disc Reviews by Brent Lorentson on May 5th, 2014 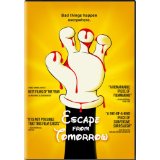 It’s been a while since a movie has been released that broke the rules on how we expected a film to be made.  Avatar was the last game changer, I would say, considering it gave audiences a new way to see films in 3D.  Sure, hundreds of millions of dollars were invested in that film, and the reward for bringing audiences something different is it being the highest box office grosser ever.  Escape From Tomorrow goes in the opposite direction, and to be matter of fact about it, the film shouldn’t even exist.  But writer/director Randy Moore pulled off something that is an achievement that deserves praise for filming his sci-fi satire on location at Disney, without their permission.

I’ll be the first to admit, the gimmick of filming a movie without permission on the grounds of any amusement park intrigues me.  It’s the film student in me that curses Moore for pulling this off, but I have so much respect for this guerilla filmmaking spectacle.  And that is what this film is about, the spectacle of Disney and the pedestal we put it on in our society.  As kids we all had these hopes and dreams of just what it would be like to experience the Magic Kingdom, and as many people get older we wish to share this experience with our own kids and hope to recapture that experience when we were younger.  But age has a funny way on changing our perspectives, and though certain things may never change, our understanding of things seems to evolve.

When we first meet Jim (Roy Abramsohn), he is on the phone and in the process of being fired while standing on the hotel balcony on the tail end of his vacation.  It’s from this point on his experience is going to spiral into a tailspin as he tries to put on a happy face and enjoy the remainder of his family vacation.

Already we know Jim is unhappy with his life.  Returning to the place where his childhood brought him so many wonderful memories and he’s reminded of his younger self, this wasn’t the life he dreamed of having, but really when you’re a child you don’t dream of being married and working behind a desk.  Being a child you indulge in the fantasy of being an astronaut, a pirate, or your favorite superhero.  So when Jim spots a pair of French girls who are on vacation, his life returns to the world of fantasy.

As Jim wanders the park with his family, he notices things are a bit off; is he hallucinating, or are things really amiss at Disney?  Once the attendants at the park notice that Jim suspects something, well, they do all they can to capture him.

My biggest worry about this film rested on the fact that since the film was being made without permission, just how would they pull of the cinematography?  I was so worried we would get nothing more than a cheesy found-footage film that would look like just a more polished family home video, but instead, this film looks pretty good.  It’s a testament to how far pro-sumer technology has come where you can get these shots but be able to do so under the nose of the great and powerful mouse.  The filmmaker commentary goes into more detail with this, but the look is what helps make this film what it is.

As for what is really going on behind the façade of the castles and rides, well, that takes us into a territory I feel spoils some of the fun, but at the same time for me was a distraction with what I felt when watching this.  I’m sure many will agree and disagree with out they experience this, but I couldn’t help but feel I was along with Jim on this cinematic  ride and empathizing with the realization of how much things change once you view them through the eyes of an adult and that childlike innocence has faded away.

(As a warning to parents, just because this is filmed at Disney, do not just expect this to be for kids of all ages.  There are some heavy adult themes, and with sex and nudity, and I just want to throw this warning out there just in case.)

Escape From Tomorrow is presented in an aspect ratio of 1.85:1.  The 1080p image is arrived at with an AVC MPEG-4 codec at an average of 18 mbps.  The film is converted to black and white, so all the lush color that Disney is known for has been removed.  Perhaps it is just me, but I felt the removal of color helped give the film a 1950’s B-movie kind of vibe that just seemed to work well for the film.  Considering how the film was shot, we get the expected brief moments of the image looking blown out and some cases of unfortunate static visuals, but it’s not so bad.

The DTS HD 5.1 audio track is actually a pleasant surprise.  The Foley mix of park visitors talking all around helps immerse you with being in the park with Jim and his family.  Some of the sound cues are offsetting that help deliver the dreamlike experiences of the film that lead to making the viewer feel uneasy.  What surprised me most is how clean the dialog is between the actors considering how the film was shot.

Filmmaker Commentary:  This track is with the director and the cinematographer of the film.  The film student in me enjoyed this track so much.  For budding directors this is a must-listen; there is a lot of information you can pick up here.  So far the best track I’ve heard in a while.

Cast Commentary:  Now this is a track that was a fun listen.  It’s of Roy Abramsohn and Elena Schuber but in character as Jim and Emily.  It’s as though they are watching it as a happy couple would watch their vacation video together.  Clever idea and fun as well.

The Making of: (15:06) This is just a brief look at all the insanity that went into filming the movie and just how they pulled it off as well as their journey to Sundance.  I can imagine there is so much more they could talk about, at least a feature-length film’s worth of stories about this production, but this will have to do for now.

Posters for Escape From Tomorrow:  A collection of ads used and considered for advertising the film.

While the film has its charms, I don’t see this really attracting the wider masses.  As I look back on it more, I feel it’s what I’d expect David Lynch to produce as a film reflecting on childhood or commercialism.  Though I did enjoy the film, I can’t say this is something I’m going to be eager to go back and watch.  But I do feel it’s a solid film for up-and-coming directors to watch and study the shot composition.

Brent Lorentson is a horror writer and film critic based out of Tampa, Florida. With a BA in Digital Film, he co-wrote and co-directed Scavenger Hunt. His short stories have appeared in various horror anthologies. In 2019 his short script Fertile Blood will be a part of the anthology horror film Slumber Party. He is currently working on his first novel A Dark and Secret Place set to be released in late 2019. Favorite Films: Taxi Driver, Fight Club, I Saw the Devil, The Wild Bunch, Dawn of the Dead, A Clockwork Orange, Pulp Fiction, Heathers, The Monster Squad, and High Fidelity.
The Amazing Spider-Man 2 Great Expectations (2012) (Blu-ray)