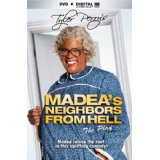 Following the live performance of Madea’s Neighbors From Hell captured on this DVD, Tyler Perry joins his fellow cast members on stage after they’ve all taken their bows. Perry has ditched his Madea drag and takes to the microphone to thank his fervent, loyal fans for their support. You probably know Perry because of the phenomenal success he has enjoyed in TV and movies. (And because he puts his name on practically everything he does.) However, Perry is quick to remind his audience that it all started on the stage.

Madea’s Neighbors From Hell premiered in Atlanta last year. As you probably guessed from the title, the play features Perry’s most famous creation: the towering, tough-talking Mabel “Madea” Simmons. I realize the character is Perry’s bread-and-butter, but it’s still a little jarring to see the uber-rich multi-hyphenate treading the boards in a direct-to-DVD movie.

Then again, Perry began his entertainment career by cutting his teeth in Atlanta’s theatrical scene. I don’t think I’m out of line when I say Atlanta’s theatrical scene isn’t exactly The Great White Way, but that was the point. Perry targeted underserved African-American audiences with stories that highlighted Christian themes. Plus, it didn’t hurt that he had a giant, outrageous grandma in his back pocket. When you combine Madea’s popularity with Perry’s loyalty to his original audience and do-it-yourself sensibility — he often writes, produces and directs his starring vehicles — it’s easier to understand why the super-successful mogul would reach for his trusty wig and muumuu, and take to the stage.

After a brief, gospel-flavored opening number, we are quickly introduced to Miss Ruth (Rhonda Davis) and her three foster children: Tay (Kimani Jackson), Shannon (Jayna Brown), and Karen (Chelsea Reynolds). The family has just moved into a new house, which is sandwiched between two loony neighbors. On one side, there’s Betty Ann Murphy — better known as “Aunt Bam” — the chatty neighborhood busybody who is happy to watch your house (for a fee). On the other side, there’s Madea (Perry), who returns home from a trip to find her house has been broken into. As Madea begins interacting with Miss Ruth and her troubled foster kids, it becomes apparent that the two brash, irritating old ladies aren’t the worst neighbors on the block.

Perry has been (justifiably) dinged for his lack of filmmaking prowess, as well as overly simplistic characters and stories. While those things stick out like sore thumbs on the big screen, they actually work to his advantage on stage. His static visual storytelling is less of an issue in the theater, where there are far fewer options. More importantly, the broad characterizations that tend to grate in movies are actually appropriate for actors who are trying to connect with audience members in the mezzanine. In other words, the stuff that comes off as sloppy on film feels refreshingly loose on stage.

At the center of it all, naturally, is Perry. By now, the performer has such command over the character and his audience that he’s perfectly comfortable breaking character (and the fourth wall). The best bits in Madea’s Neighbors From Hell feel spontaneous, like Perry saying the word “untiform” (instead of “uniform”) by accident or making fun of a co-star’s ashy knees. Davis — who has starred in various “Tyler Perry…” projects, including previous stints playing Aunt Bam — is equally at home in her character’s skin and has a nice rapport with both Perry and the audience.

Since the play was produced last year, Perry is able to work in references to Miley Cyrus’s twerking and George Zimmerman. The writing overall, however, is not the show’s strength. Perry struggles with pacing; the play clocks in at 138 minutes because scenes tend to drag for *way* too long, not because there’s a ton of content. He also states the story’s themes in overly obvious ways. (Madea’s Neighbors From Hell has opinions about the foster care system and how abuse is passed from one generation to another.) Even the musical numbers occur at odd times; after the show-opening tune, there’s a significant gap until a new set of performances comes in rapid succession.

Although the rest of the cast is better at singing than acting, they mostly acquit themselves well enough. I was especially impressed by Davis, who tapped into Miss Ruth’s exhausting pleasantness. Of course, this is Perry’s show through and through, and he doesn’t disappoint his fans. (During the end credits, there are audience testimonials from people who traveled from all over the country to see this play.) If you’ve only seen his work in movies or TV and you’re mystified by his mind-boggling success, you could do worse than popping in this funny DVD — or any of his other filmed theatrical productions — to see why the play’s the thing.