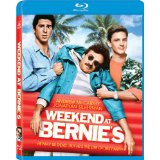 Well, considering that there were so many different strange film ideas in the 1980s, it was only a matter of time before someone would write and produce a film about a dead guy, right? Well, you’re in luck, as two names from the period (Andrew McCarthy, St. Elmo’s Fire, and Jonathan Silverman, Brighton Beach Memoirs) fulfill your wish as Weekend at Bernie’s returns to Blu-ray.

McCarthy and Silverman play insurance reps with bigger aspirations in a company owned by Bernie Lomax (Manimal), who discover a glitch which may have resulted in $2 million of the company’s money being stolen. As a reward, Bernie invites them to his beach house, but we find out the money was stolen by Bernie himself, and he asks some members of the mob to kill the two. However, in a twist, the mob boss decides to have Bernie killed, in part because of an affair Bernie is having with the boss’ girlfriend. Bernie is killed before McCarthy and Silverman get to the beach house, and once they realize Bernie is dead, the wacky hijinks commence.

If there is a message to be had here, it is that if you’re going to kill someone, talk to McCarthy and Silverman about concealing it so you don’t get caught. They do all kinds of things, and yet still manage to conceal rigor mortis and the stench of death to hundreds of beachgoers, and even took Bernie on tour for a sequel four years later. It’s either that, or Kiser (as Bernie) was the toughest guy ever, as he was dragged by a speedboat, hit several buoys, and survived being lost at sea, with no noticeable damage to his body. Of course, I could be accused of thinking logically for such a silly film, but sometimes you have to. Another ‘80s name (Catherine Mary Stewart, The Last Starfighter) makes an appearance as a love interest, but was never in the film enough for me to appreciate her.

Weekend At Bernie’s is presented in its original aspect ratio of 1.85:1. The 1080p image is arrived at with an AVC MPEG-4 codec at an average 25-30 mbps. The high-definition image presentation is typical of a 1980’s catalog title. There’s some dirt and other age-related issues. Still, the colors are actually pretty solid. The original film grain accents the 80’s look in style. Black levels are average while detail has its moments. Close-ups are particularly textured for the age. Long shots appear soft. It’s as good as this film is ever going to look.

The DTS-HD Master Audio 2.0 is a minimal presentation. Music dominates anything that could be remotely called dynamic. The dialog is serviceable, and in a film like this, that’s all you’re really looking for.

In terms of nostalgia, Weekend at Bernie’s has that in spades, but it really has never been something of a cinematic gem.

Revenge of the Nerds (Blu-ray) Neighbors