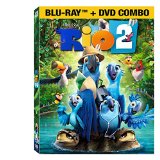 “Who cares about a bunch of birds?”

Well, judging by the fact that the original Rio grossed $484 million worldwide, it seems more than a few people were invested. The avian adventure from Blue Sky Studios may not have soared as high as Disney/Pixar or DreamWorks Animation’s best efforts — or even Blue Sky’s own Ice Age juggernaut — but it proved to be a dazzling, lucrative diversion in the spring of 2011. This charming sequel, which arrived almost three years to the day later and grossed a near-identical $487 million worldwide, retains the disposable, toe-tapping charm of its predecessor.

Having watched Rio recently, I actually felt like the film lent itself pretty naturally to a follow-up, which prevents this sequel from feeling like a total cash-grab. (Don’t get me wrong: Rio 2 was still very happy to grab your cash.) The original ended with the happy pairing of Blu (voiced by Jesse Eisenberg) and Jewel (Anne Hathaway), who were thought to be the last two macaws of their species.

Rio 2 quickly introduces us to Blu and Jewel’s three kids: Carla (Rachel Crow), Bia (Amandla Stenberg), and Tiago (Pierce Gagnon). The family is living a happy, domesticated life in Rio alongside Blu’s human owner Linda (Leslie Mann) and her bird-loving scientist/husband Tulio (Rodrigo Santoro). During an expedition to the Amazon — which the original movie somehow managed to avoid — Linda and Tulio discover that Blu and his brood may not be the last of their kind after all. Feeling cooped up at home and craving a return to her wild roots, Jewel convinces the skittish Blu to fly to the Amazon for a family vacation. (Plenty of jokes are made at the expense of Blu’s fanny pack because fanny packs will never not be funny.) Meanwhile, Blu’s flock of friends — Rafael (George Lopez), Pedro (will.i.am) and Nico (Jamie Foxx) — are scouting talent for the upcoming Carnival celebration, which they use as their flimsy excuse to tag along.

On the way there, the group is spotted by Nigel (Jemaine Clement), the evil, preening cockatoo antagonist from the first film who has revenge on his mind. When the family arrives in the Amazon, they learn the remaining macaws have been pushed deeper into the rainforest by humans. The macaws are led by Eduardo (Andy Garcia), who is also Jewel’s father. Eduardo deeply distrusts humans, and his fears aren’t exactly unfounded. A group of loggers kidnap Linda and Tulio, and threaten the macaws’ jungle home.

Despite venturing into the wild Amazon, Rio 2 covers a lot of familiar territory, especially when it comes to the relationship between Blu and his disapproving father-in-law. The sequel also has a more overt environmental message than its predecessor, but at least it doesn’t come off as a Happy Feet-style ambush. The climactic battle between our blue heroes and the big, bad deforesting humans was basically a kid-friendly remake of Avatar. (Which, everyone knows, was itself an unofficial remake of FernGully and Pocahontas.)

Eisenberg continues to be the perfect choice to play the neurotic Blu, while Hathaway is sort of wasted on a bland character whose prickly edges have been sanded down for the sequel. (Even Blu and Jewel’s eventual conflict over where their family should live feels lukewarm.) Clement (Men in Black III) continues his successful run of playing comically menacing villains. Simply put, Nigel was too good to kill off in the original (The villain is less scary and more outright buffoonish in the sequel.) His standout scene is a remix of Gloria Gaynor’s “I Will Survive,” but the Carnival auditions allow for a slew of amusing musical moments. With this more crowded sequel, some of the first film’s supporting players — namely the ones voiced by Lopez, will.i.am, Foxx, and Tracy Morgan — are pushed to the margins.

Besides Garcia, the most notable additions include Kristin Chenoweth (stealing all of her scenes) as a poison dart frog who is hopelessly in love with Nigel. (She serenades him with a tune called “Poisonous Love.”) There’s also singer Bruno Mars as a smoother, studlier macaw who re-enters Jewel’s life. I thought the film missed a chance to explore whether Blu and Jewel were actually meant for each other, or if they only got together out of necessity. Then I remembered this movie is for kids who probably don’t want to deal with any complex relationship drama and just came to see some pretty birds. Fortunately, giving the audience pretty things to look at is where both Rio films excel.

Director/co-writer Carlos Saldanha — a native of Rio de Janeiro — has obviously put a lot of energy into lovingly recreating his homeland for both of these films. That sort of personal touch is unusual among animated offerings, even within some of the most successful and acclaimed films of all time. (If your life depended on it, could you name either of the two people who directed Frozen…without checking IMDb? Me neither.) Still, some of the story beats curiously feel like an outsider’s perception of Brazil. For example, the birds in the Amazon settle a beef with (wait for it) a soccer match! (I mean all they do in Brazil is play soccer and dance samba, right?)

Then again, stereotypes tend to be grounded in truth. More importantly, this is also the sort of quibble that will fly over the head of Rio 2’s intended audience. Instead, it’s better to think of these films as a celebration of Brazil rather than some sort of accurate depiction. (I don’t feel like City of God: The Animated Movie would be very popular among parents with young kids.)

Rio 2 is presented in its original aspect ratio of 2.40:1. The 1080p image is arrived at with an AVC MPEG-4 codec at an average of 24 mbps. I had a chance to see the movie in 3D during its theatrical run, so I’m happy to report the 2D Blu-ray presentation is more than up to the task of capturing the film’s vibrant look. The explosion of colors — particularly the blue of our macaw heroes and the green of the Amazon — is as dazzling as it is varied. There’s also a strong amount of fine detail and texture evident in everything from the various birds’ feathers to the ground and trees in the jungle. (The human characters, on the other hand, remain flatter and more uncanny valley-ish than their avian counterparts; however, I suspect that has more to do with the intended animation style than any fault with the Blu-ray.) The only place the extra dimension is slightly missed is during those intricate, Busby Berkeley-style musical numbers that now lack a bit of depth.. That’s a minor complaint for what is a bright, jubilant presentation.

The DTS-HD Master Audio 7.1 track brings every corner of the Amazon — and every drumbeat of the film’s infectious soundtrack — to festive life. It starts right at the top with the 20th Century Fox fanfare getting a Brazilian makeover. The film’s opening number “What is Love” showcases the way the subs lend an extra oomph to the music’s propulsive samba/bossa nova beats. The music is presented in an immersive, dynamic way that holds some exciting surprises for the viewer. The same can be said for the sonic presentation of the film’s main jungle setting, which shows an admirable amount of restraint in the way it supports the film’s dialogue and music. (The dialogue and music are quite aggressive, you wouldn’t want a heavy hand with the ambient noises.) This is a top-notch track all the way around.

All of the bonus material is presented in HD. The disc is loaded with extras, but this is a case of quantity over quality; too many of them are eminently skippable.

Rio Refresher: (3:21) This is basically a “Previously on” reel for anyone who didn’t see (or forgot) what happened in the first film.

Deleted Scene — Practice: (0:39) A quick, disposable moment of pompous Bob warming up backstage only to be thwarted.

Boom, Shake, Snap — The Local Sounds of Brazil: (19:28) Given that the film’s music is arguably its most impressive quality, it’s not surprising to find this is among the most interesting special features. Director Carlos Saldanha and executive music producer Sergio Mendes salute the various Brazilian contributors in four mini-docs. Those contributors include body percussionists The Barbatuques, musical group Uakti, and musican Carlinhos Brown. Includes a demo from The Barbatuques.

Nigel the Shakespearean Cockatoo and Friends: (7:17) Not really sure why this featurette is named after Nigel since it’s really a tour of the Blue Sky Studios offices that focuses on the talented, hammy animators. Yep, their job is cooler than ours.

You Be the Judge: (1:49) A skippable skit that has a few Amazonian creatures going through American Idol-style auditions. Not surprisingly, Nigel is the “mean judge.”

“I Will Survive” Multi-Language Sequence: (1:58) Nigel’s standout musical moment is presented in a variety of languages, including Spanish, Mandarin, German, Italian, and (of course) Portuguese.

“What is Love” by Janelle Monae: (1:37) A thoroughly unnecessary music video considering this song pops up in a few other places among the bonus material, including…

Music, Dance, Sing-Along Machine: …The Music Machine allows you to skip to any musical interlude in the film. The sing-along does the same while providing lyrics, and the dance-along offers a character acting out suggested dance moves for a few of the movie’s songs. (What this really means is that you can listen to “What is Love” three separate times.)

Rio 2 doesn’t achieve greatness, but I don’t get the sense greatness was anybody’s goal. The voice cast is solid, the visuals are suitably lush, and that seems to be good enough for everyone involved. In the end, this film is a lot like the infectiously joyous music on the soundtrack: you’ll remember tapping your feet and having a fun time. But you probably won’t be compelled to remember too many specifics from your trip to Rio.

How the West Was Won: The Complete Second Season The Purge: Anarchy