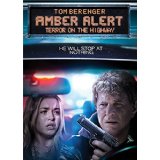 Those real cool cats up at Nasser Entertainment must love you guys. They’ve given us 5 copies of Amber Alert: Terror On The Highway to give away to our Upcomingdiscs faithful. That means you’ve got 5 chances to dig your teeth into this dramatic thriller. It stars Tom Berener, Torri Higginson and Britt McKillip and produced by real reserve police officer Joseph Nasser. It’s a rare look at the national Amber Alert System and an edge-of-your-seat thriller. It’s out this week on DVD.

Gino Sassani is a member of the Southeastern Film Critic's Association (SEFCA). He is a film and television critic based in Tampa, Florida. He's also the Senior Editor here at Upcomingdiscs. Gino started reviewing films in the early 1990's as a segment of his local television show Focus. He's an award-winning recording artist for Omega Records. Gino is currently working on his 8th album Merchants & Mercenaries. Gino took over Upcomingdiscs Dec 1, 2008. He works out of a home theater he calls The Reel World. Favorite films: The Godfather, The Godfather Part II, The Body Snatcher (Val Lewton film with Karloff and Lugosi, not the pod people film), Unforgiven, Gladiator, The Lion King, Jaws, Son Of Frankenstein, The Good, The Bad And The Ugly, and Monsters, Inc.
The Legend of Billie Jean: Special “Fair is Fair” Edition (Blu-ray) Noah (Blu-ray)