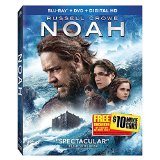 No matter how far removed you may be from Sunday school — or even if you never attended in the first place — chances are you know that God spoke to Noah. You also know He told him to build an ark in anticipation of a catastrophic flood meant to wipe out mankind. What you may not have realized (or remembered) is that, in the Bible, Noah himself doesn’t speak at all until well after that rain starts. So in adapting the famous Book of Genesis story to the screen, any filmmaker is going to have to take a certain amount of liberties. And when that filmmaker is Darren Aronofsky, the result is a strange, uncommonly thoughtful blockbuster that is as flawed as the hero it presents.

“In the beginning, there was nothing…”

Aronofsky opens Noah with a brisk presentation of mankind’s original sin in the Garden of Eden as a series of striking rapid cuts that recall the director’s work in Requiem for a Dream. As a boy, Noah — a descendant of Seth, one of three sons identified as Adam and Eve’s offspring along with Cain and Abel — witnesses mankind’s wickedness firsthand when his father (Marton Csokas) is killed by Tubal-cain (Ray Winstone), a descendant of Cain (who had killed his own brother Abel).

– “Is that all you saw? The fires of destruction of this place?”

Years later, Noah (Russell Crowe) starts experiencing terrifying visions of a world-destroying flood. With his family in tow, Noah consults his grandfather Methuselah (Anthony Hopkins) and concludes the flood can be survived by the planet’s innocent creatures and his righteous family. Noah’s family includes wife Naameh (Jennifer Connelly), their three sons and Ila, the young girl they rescued on their journey to see Methuselah, who gifts Noah a seed from the Garden of Eden that eventually sprouts a fruitful forest. (Methuselah also offers Noah some “funny” tea that brings his vision into sharper focus.)

“Water cleanses. It separates the foul from the pure…the wicked from the innocent.”

From there, Noah leaps forward about a decade and yada-yadas much of the famous ark’s construction. Noah’s oldest son Shem (Douglas Booth) is coupled with Ila (Emma Watson), despite the fact that an injury left her unable to bear children. Middle son Ham (Logan Lerman) longs for his own +1 on the ark and a sense of purpose, while youngest son Japheth (Leo McHugh Carroll) doesn’t have much of a purpose at all in this movie adaptation. Eventually, Noah and his family are confronted by Tubal-cain, who considers himself a king among men. He’s also offended by the idea that he wasn’t chosen by God to be on the ark and vows to take the vessel by force.

Except in Noah, no one utters the word of “God”; the script by Aronofsky and frequent collaborator Ari Handel has its characters refer to Him as “the Creator.” I guess this is also as good a time to mention the rock giants. Ok, so they’re actually known as “Watchers” — a group of fallen angels who were punished by the Creator for trying to interfere by helping mankind — but they resemble gnarly Decepticons and are voiced by actors like Nick Nolte, Frank Langella and (Aranofsky regular) Mark Margolis. Convinced that Noah is carrying out the Creator’s will, the Watchers assist in the construction of the ark and — in the film’s biggest set piece — serve as the world’s most ancient offensive line once the rain starts and Tubal-cain’s people desperately try to board the ark.

The sequence is alternately spectacular and muddled, which is to be expected from a filmmaker working on this sort of scale for the first time. The biggest budget Aronofsky had previously worked with was the $35 million it cost to make 2006’s The Fountain, which itself was a scaled down version of the $70 million Fountain project he’d been forced to scrap a few years earlier. Of course, the reason Aronofsky got a reported $130 million to make Noah was the wild profitability of his last movie, Black Swan. (Which raked in $329 million worldwide on a $13 million budget.)

A lot of filmmakers would’ve taken that cash and run to the nearest superhero franchise. Instead, Aronofsky characteristically zagged when you expected him to zig; the self-professed atheist decided to take that clout and make “the least biblical” biblical film ever made. Despite the fact that the story of Noah actually holds a great deal of personal meaning to Aronofsky — which is revealed in this disc’s special features — quotes like that only served to antagonize moviegoers who take their sacred texts even more seriously than the most ardent Harry Potter/Hunger Games fans. (I imagine the suggestion that Noah’s vision from God was the result of being slyly drugged by his grandfather also didn’t sit well with a lot of people.) Not surprisingly, Noah drew its share of controversy on the way to its own $359 million worldwide gross.

The noise (and, frankly, the rock giants) distracted from Aronofsky’s most impressive achievement. Although the film does contain some awe-inspiring moments of visual splendor — the ark nicely fills out every corner of the screen — the director has taken what is essentially a bare bones parable and extrapolated it into a meditation on faith, mercy, and mankind’s place on Earth. (Is the planet better with us in it? Does the fact that we’re the only species on Earth that is even capable of asking itself that question mean the answer is “yes”?) In other words, much headier than the stuff that typically gets greenlit at this scale. (Especially when you consider Noah‘s sequel prospects are pretty non-existent.)

Despite its lofty ambitions, Noah does fall into a few melodramatic traps. I wish Lerman had been given more space to expand Ham beyond the typical petulant teen, and I wish Watson’s chemistry with Booth (her purported love interest) was half as good as it is with Crowe. I also wish Connelly hadn’t been saddled with the vaguely British accent she had to put on or with a character who has little to do besides fret for her husband and children. Hopkins brings a welcome twinkle to his performance as Methuselah, but it also feels like the sort of un-challenging role the actor can play in his sleep.

Crowe, on the other hand, appears to be locked in for the first time in years. He plays Noah with a calm, fanatical glint befitting a man who has decided to allow virtually all of humanity to die. Crowe lets you see the effect this impossible task has on Noah’s psyche; it’s the ultimate case of survivor’s guilt. I also thoroughly enjoyed Winstone’s performance as the nominal antagonist. Even before Noah starts to lose his marbles, Tubal-cain — thanks to Winstone’s confident bluster and grandiosity — technically represents the voice of reason (which make his views attractive to Ham), even as he embodies some of mankind’s worst traits.

In bringing a spare, implausible story to the big screen, Noah is sometimes messy and trips over its own storytelling (particularly during the first 45 minutes or so). But once the film finds its sea legs, it impresses as a (really expensive) family drama about faith and humanity.

Noah is presented in an aspect ratio of 1.85:1. The 1080p image is arrived at with an AVC MPEG-4 codec at an average of 25 mbps. Although the movie’s centerpiece sequences are obviously drenched in rain, there are moments of resplendent beauty to be found in this presentation. Much of the film was shot in Iceland, and every crevice of the stunning landscape (and the Watchers) is well-represented on screen. Skin tones are also pleasingly (and surprisingly) warm leading up to movie’s major set piece.

The palette may be gray, but the image remains vivid and sharp as a tack. (Close-ups here reveal an extraordinary amount of detail on the actors’ faces and costumes.) The limited bits of color in the film mostly appear during the brief, trippy Garden of Eden flashes. Black levels are inky — particularly during a terrific silhouetted shot of Noah and Naameh — and separation is generally strong. Some scenes inside the ark a bit murky, but remain free of any sort of blemish. Despite its serious themes, this $130 million version of Noah is meant to be a visual spectacle; this Blu-ray disc from Paramount nicely follows suit.

The DTS-HD Master Audio 7.1 track is totally transportive, which is impressive given that the place we’re being transported to is thousands of years in the past. (Or maybe thousands of years in the future, given how loose Aronofsky is with the source material.) Either way, this is an authoritative mix that utilizes every one of its eight channels to maximum effect while never sacrificing clarity. (Dialogue is perfectly intelligible throughout.) The subs give an extra oomph to the score by Clint Mansell (another Aronofsky regular) and Nolte’s gravelly vocal performance, but they are most impressive during the (literally) earth-shattering flood sequence. The track, however, also manages to shine during subtler moments, whether it’s therustling of wind on the journey to see Methuselah or the swelling, all-consuming arrival of snakes on the ark. (That turned out to be the high-water mark for animal activity, since the creatures are subdued once they’re aboard the ark.) There’s also a strong sense of directionality once the action ramps up, which makes for one of the livelier, more dynamic sonic presentations you’re likely to find.

All of the bonus material is presented in HD. The three featurettes clock in at a shade over an hour and include a Play All option.

Iceland — Extreme Beauty: (20:40) Production on Noah began in July 2012 with the crew traveling to Iceland. Much of this featurette — which doubles as the first entry in an hour-long production diary — is dedicated to the borderline supernatural beauty of the country, as well as the unique challenges Aronofsky and cinematographer Matthew Libatique (another long-time collaborator) had to contend with.

The Ark Exterior — A Battle for 300 Cubits: (19:46) The action moves to an arboretum in Long Island, and the construction of the ark’s exterior. (The Bible wasn’t big on specifics so Aronofsky and production designer Mark Friedberg opted for something functional that wasn’t necessarily meant to be admired.) We also get a look at the massive amount of fake rain that was poured on the actors. Finally, we meet Vera Fried, the 7th grade teacher who inspired Aronofsky to become a writer after her favorable reaction to a poem he wrote about Noah. (Fried cameos in the movie.)

The Ark Interior — Animals Two by Two: (19:55) A 165,000-square-foot armory in Brooklyn housed the massive interior set. Libatique pops up to talk about the challenges of lighting the dark space, but the most interesting parts of this featurette include an exploration into Noah’s psyche. (All the filmmakers had to go on was his description in the Bible as someone who was “righteous.”

Noah may spectacularly dramatize the end of the world — or is it the beginning of a new one? — but it’s the quieter moments that leave a lasting impression. This Paramount Blu-ray delivers a fantastic A/V presentation and bonus material that gives you a nice peek of what Aronofsky is like on a film set.

It’s obviously not a film everybody will enjoy. In fact, I imagine a fair number of people will hate it on principle. Beyond any debates about its Biblical bona fides, I’d say it’s worth a look for outwardly addressing theological ideas other blockbusters wouldn’t touch with a 100-foot pole.