Posted in: Disc Reviews by Brent Lorentson on August 5th, 2014 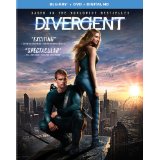 “You’re different. You don’t fit into a category. They can’t control you. They call it Divergent.”

In the wake of Hunger Games and Twilight studios have been snatching up the rights to young adult fiction and gearing up for franchises, all in the name of capturing the hearts and wallets of the legions of fans of these book series.  Though there have been a few hits, the failures have been plentiful i.e.: City of Bones, The Host, and The Vampire Academy.  As a guy approaching his mid-thirties, it’s safe to say I’m nowhere near being the target audience for this film, but call me crazy, I actually dug it.

Where Hunger Games has its heroine Katniss, Divergent has us following Beatrice Prior (Shailene Woodley) along for her journey of not just self-discovery but finding where she truly belongs.  In this new world, Chicago is a city in ruins and surrounded by an epic wall to keep any possible dangers out.  But it is within these walls where our story unfolds: the city is divided into five factions, each based on the people’s moral aptitude.  Each year a day is set aside where all those who have turned 16 must decide what faction they want to join, which means they may have to leave their families never to see them again.  To help these young adults with making their decision, they are each given an aptitude test that tells them where they “should” go, but in the end the choice is up to them.

Beatrice is from the Abnegation faction, which is filled with those who are believed to be selfless and without vanity.  The testing process I couldn’t help but think back to the Matrix films as we followed Neo through his training.  The test has Beatrice confronting her reflection as well as having her encounter a large scary-looking dog.  It’s during this test she seems to break the rules, and her results are discovered to be inconclusive, or as the test administrator declares her, Divergent, that she doesn’t fit into any group.  This eventually leads to Beatrice deciding to join the Dauntless group, made up of the brave who are the protectors and police force of Chicago.

At this point the film finally starts to pick up the pace. I understand the necessity of the start of the film to introduce us into this world, but this just felt like it could have been trimmed down.  I’m sure those who have read the book got plenty out of this, but it had me feeling antsy, and I was getting worried that I had another two hours of pointless exposition to follow.  But it is as we see Beatrice join her new faction that the movie starts to have a little fun.  Members of Dauntless seem to be parkour enthusiasts as they seem to climb whatever is in front of them, or instead they’ll jump from moving trains or partake in some reckless activity.  And it’s up on a rooftop Beatrice and the new initiates meet the leader of Dauntless, Eric (Jai Courtney).  Eric explains the first step to joining Dauntless is that they have to jump from the roof and down several stories, but what is beneath it is unknown.  Again I think back to The Matrix as Morpheus is explaining the jump sequence to Neo, this whole leap of faith and believing you can survive the jump.  Is it the same scenario? Well, sort of.

It’s at the bottom of the drop where Beatrice meets Four (Theo James) where she then changes her name to Tris, as she is now a member of the new faction.  Instantly you see the connection Tris and Four are supposed to share and simply accept that these two will end up together.  None of the beats of the film are original at this point, but as the initiates get into their training that comes in two parts, the first being physical and the second mental, it’s during this training where we finally get to see a female character fighting at the same level as the boys.

Where I have the most respect for Woodley is in how well she handles the physical nature of the role, whether it’s in the ring taking punches from both male and female combatants, to seeing her perform through the weapons training.  Woodley has us rooting for this underdog, not simply because of her having a charming face, but she gets us to genuinely feel for her.

There is a great little sequence in the film where the initiates compete in a game of capture the flag using dart guns that simulate the feel of an actual gunshot wound.  This sequence was fun, but I couldn’t help but wish for more scenes like this instead of the bickering between her and Peter (Miles Teller).

As all the training continues, a thin political story goes on as Jeanine (Kate Winslet) is seeking out Divergents while unrest is brewing as the Erudite faction is trying to seize political power from the Abnegation faction.  The politics in the film really are wasted here; not enough time is spent exploring what it is the factions are even disagreeing about, and it simply leaves Winslet playing the part of the villainess who wants to wipe out an entire faction over the simple lust for power.  I’m sure the books and possibly even the sequels will delve more into these politics, but really it simply plays as a back-burner to us simply watching Tris become a rebellious soldier.

When Tris makes it to the second round of the training, the mental portion where she is put under and has to confront her fears, her secret is basically revealed to Four.  Though Tris is constantly told to trust no one, it’s inevitable that she accepts that Four knows the truth, and could he possibly have a secret of his own?

What works for this film are the solid effects throughout; the set pieces are epic and allow this world to feel believable.  But the moments that shine are too few and far between.  The capture the flag sequence is fun, and this is what we needed more of.  But alas, I have to remember this film is not meant for me, it is for the young teenage girls, and that is where I have to rethink what I’m watching.  Being Divergent isn’t about being a rebel; it’s simply letting young girls out there know that it’s OK to not belong to any set place in the world, that it’s perfectly fine to think for yourself and be an individual.

Divergent is presented in its original aspect ratio of 2.40:1. The 1080p image is arrived at with an AVC MPEG-4 codec at an average 25-30 mbps. The high-definition image presentation is a study in contrast. The image does a pretty solid job of delivering on the various textures and colors of this world. There’s quite a stark contrast in dress and sets for the various factions. The sharp and detailed image works this concept to near perfection. Black levels are absolutely solid. Blacks offer not only deep and inky black depth, but there’s a retention of the wonderful texture even in the darkest scenes.

The DTS-HD Master Audio 7.1 is absolutely brilliant. This is one of the best uses of the additional two surround speakers I’ve encountered. Everything from subtle whispers to even elements of the score wraps you constantly throughout this audio presentation. Dialog is always solid. Some of the most impressive moments have to be the sweeping and often ethereal qualities of Hans Zimmer’s music. These environments come alive in so many ways that I’ve seldom felt so immersed within a film.

There are two Commentary Tracks to be found here. One features director Neil Burger and the second features producers Lucy Fisher and Douglas Wick. Both offer plenty of information, but the producer track is more or less fluff. Burger delivers the most detail and insight.

Bringing Divergent To Life: (47:17) This is a four-part behind-the-scenes feature that has a handy play-all. The individual sections are called: A Bold Beginning, Becoming Divergent, The Epic Experience and A Fearless Finish. In addition to the usual cast and crew comments, there’s a lot here from the series author. She was apparently on set a lot and offers a rather fresh viewpoint as an author witnessing her creation become a film. There’s the usual love fest. Yes, everybody loves everything and everybody else. The big topics covered include casting, Chicago locations, actor bootcamp, stunt training, conceptual art and production design. Of course, you have plenty on f/x, and the third section is a several-day production diary. There’s a ton of behind-the-scenes footage. It’s a rather extensive and well presented feature.

Deleted Scenes: (4:27) There are only four, and there is no individual selection option. All of this is pretty much character moments.

Faction Before Blood: (14:51) This feature focuses on the concepts of the film. The cast members describe the factions of which their characters are members. The author gives her input as to where the general ideas came from. It ends with several cast members answering the question: what faction would you choose?

This is a film women are going to love.  It’s a film showing that women don’t need sexuality to overcome adversity, but strength, bravery and intelligence.  Sure, the ladies will enjoy the male eye candy that is Theo James, but it’s the rebellious nature of Tris I see the female audience embracing the most.  I really can’t remember an action film geared so much towards a female audience, and that is precisely what this film is.    Though the end of the film left me hoping for so much more, my hope is that this really is simply a jumping-off point for what’s to come in the following two films.  The film isn’t perfect, but it’s fun, and that’s what matters.  And just because it’s March, don’t let that fool you, because Divergent just like its heroine: it doesn’t follow the rules.

Brent Lorentson is a horror writer and film critic based out of Tampa, Florida. With a BA in Digital Film, he co-wrote and co-directed Scavenger Hunt. His short stories have appeared in various horror anthologies. In 2019 his short script Fertile Blood will be a part of the anthology horror film Slumber Party. He is currently working on his first novel A Dark and Secret Place set to be released in late 2019. Favorite Films: Taxi Driver, Fight Club, I Saw the Devil, The Wild Bunch, Dawn of the Dead, A Clockwork Orange, Pulp Fiction, Heathers, The Monster Squad, and High Fidelity.
Contest: Win Jesse on DVD From Arc Entertainment Grace Kelly Collection