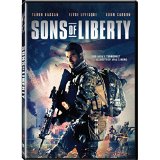 By the time the innovative opening credits for Sons of Liberty wrap up, the movie has outlined an expansive backstory that mixes historical fact (the real-life Sons of Liberty form in Boston in 1765) and fiction (Allister Salinger, the head of the mysterious Ordo Mundi, designs the first successful human clone in 1974). It’s surprisingly dense stuff, especially for a jumbled, straight-to-DVD action/thriller that mostly plays out like a particularly violent episode of NCIS.

To be fair, part of my confusion early on in the film probably stemmed from the fact that I didn’t realize I was watching the third movie in a series of low-budget action films from director Drew Hall. Sons of Liberty follows Skyhook and The Phoenix Rises, both of which came out in 2012. Each of the films follows a group of scientists and operatives who work to thwart various terrorist groups. At least that seems to describe these last two movies; from what I gather, Skyhook mostly has characters standing around and talking. (Even worse, Kareem Abdul-Jabbar is nowhere to be found.)

Sons of Liberty begins by showing us the failed mission that lands elite operative Tom (Adam Cardon) in the hospital. He is visited by Jan (Catalina Soto-Aguilar), a colleague with whom he shares a (complex?) past. Once Tom is well enough to work, his services are loaned out to the Domestic Nuclear Detention Office (DNDO) to thwart a group of mercenaries set on detonating a nuclear bomb on the Gulf Coast. (Sons of Liberty was filmed in Mobile.) Those mercenaries include sinister A.J. Bashir (Tamer Hassan), rogue IRA soldier/knife enthusiast Rourke (Elyse Levesque), and a shadowy assassin sent to supervise the operation by powerful Ordo Mundi head Allister Salinger (Neil Dickson). Against Tom’s wishes, Jan — a scientist by trade — becomes a field agent and joins the squad, which is collectively known as the Sons of Liberty (SOL).

Of course, the ones who are really SOL are those of us who enjoy cohesion or any sort of connection with movie characters. Sure, some of that disconnect can be attributed to not having seen the previous two films, which mostly manifests in not being able to totally appreciate the dynamic within the team (and especially between Tom and Jan). But ignorance of what came before doesn’t excuse the rest of the mess in Sons of Liberty.

Ordo Mundi is built up to be this group that allegedly blurs the line between terrorists and revolutionaries. But since there is never any clear motivation given for why they want to blow up the Gulf Coast in the first place, it’s hard to get invested in any of these scenes. (Although Keith David, the film’s most recognizable face, pops up as a shady arms dealer.)  Instead, the movie has its villains (and its good guys) spend an inordinate amount of time babbling about uranium, cobalt, and detonators. On top of that, one of the main villains randomly gets a tragic backstory. (Flashbacks included!)

And as if trying to prevent a nuclear disaster on U.S. soil weren’t keeping him busy enough, Tom takes an interest in a serial killer who is torturing women and marking their bodies with numbers and symbols. (Admittedly, this last twist is more Criminal Minds than NCIS.)

The instinct to over-complicate things mangles the story, but serves the action sequences quite well. Some cheesy POV camera angles notwithstanding, Hall comes up with some nicely kinetic camera movements during shootouts and hand-to-hand combat. (Including a brutal girlfight toward the end.) The acting is generally wooden, though Cardon does have glimmers of exasperated/smart-aleck charm. Soto-Aguilar, on the other hand, possesses spunk, but makes for as convincing a scientist as Dr. Christmas Jones.

Despite some impressive action sequences, Sons of Liberty has a modest scale and jokey tone that makes it seem like something that would play better on USA network reruns rather than feature-film form. (At least until a few team members are violently killed.) Not surprisingly, Hall leaves the door wide open for yet another film in the series. Here’s hoping the next one he makes is able to stand on its own so that we spend more time on the edge of our seats and less time scratching our heads.