Posted in: Disc Reviews by Archive Authors on October 7th, 2014 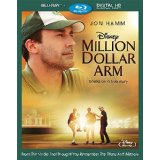 Baseball is huge, and Bollywood is huge, so imagine if you put them together. In many ways, Million Dollar Arm is about Indian culture and what a separate world it is from ours. The film starts out in Los Angeles where J.B. Bernstein (Jon Hamm from Mad Men) is a sports agent who has broken off from a big agency to start his own firm. His partner, Aash (Aasif Mandvi of The Daily Show), is very nervous about where their next client is coming from, since they lost a big one right at the start of the film. Bernstein, thinking on his feet, decides to pursue an untapped market for baseball and the big-money stars who are big-league pitchers. He sees India as completely virgin territory for baseball. But the problem is there are no baseball players in India. Aash gives him the idea by talking about cricket on cable.

Clearly, cricket and baseball are totally different, but Bernstein is desperate. He pitches his idea to a big-shot money man. The money man, Chang (Tzi Ma), listens and agrees with big conditions. They are basically impossible conditions, but again, Bernstein is desperate. Bernstein had a great life once, and he still has the big expensive house and the Jaguar, but his time to make this big gamble work is running out. A nurse (Lake Bell) rents his guesthouse. She’s a sweet person, but Bernstein usually has a different model girlfriend on a regular basis. Her washing machine is broken just as he is walking out the door to head halfway around the world. He gives her keys to the house and tells her to just use the machine and be careful.

Bernstein arrives in India with a huge job ahead of him, which is to find two pitchers in all of India who can throw above 85 miles per hour.

He has problems immediately adjusting to the Indian way of life. There are many ridiculous problems. Too many to mention. It’s not my job to tell you everything.

One problem is he doesn’t have the scout he was waiting on. When he finally arrives, Bernstein is worried. The scout was a last-minute replacement because he couldn’t get the guy he wanted. Ray (Alan Arkin) is a bit of a jaded grouch. He literally doesn’t expend an ounce of energy more than he absolutely has to.

They travel all over India, and they get the word out about the million-dollar arm that they are looking for. A million dollars is an awfully, awfully, awfully large amount of money for almost everyone who lives there. I’ve seen a lot of movies filmed in India, and it is hard to describe the incredible culture shock to be experienced when visiting there and vise versa. The quality of life and the way people live might as well be on different planets. We see all of that here.

This is a sports movie about the business of sports. It is also a story about how the world is getting smaller and smaller all the time. It is a story about people facing challenges when it seems hopeless.

It is also a love story in lots of different ways. It is also Jon Hamm’s first real stab at movie stardom. I think it achieves terrific results with fairly modest ambitions. I didn’t think much of it when I went to see it, and I was pleasantly surprised. I wish I had a million-dollar arm, or anything worth a million dollars. I think most of us do.

Million Dollar Arm is presented in its original aspect ratio of 2.39:1. The 1080p image is arrived at with an AVC MPEG-4 codec at an average 30-35 mbps. The high-definition image presentation has a very natural feel. Colors are more reference and not so stylish. Much of the shots in India come out very documentary-like. There is nice contrast when we are back in the United States and on a green lush baseball field. Here colors pop more vividly. This all provides a nice change between the two places. Black levels are solid but not quite so inky and deep. Fortunately, there’s not much necessity here. The image retains a sharpness while providing nice texture, again part of the contrast between the two countries.

The DTS-HD Master Audio 5.1 is not going to blow you away with anything dynamic or aggressive. What we have here is a solid dialog piece where music and ambients are not allowed to dominate or intrude. It’s an intimate sound field that gives just the smallest hints of atmosphere from time to time. It might be the honking of a horn (Indians love to honk their horns, so says the film). It might be the impact of a baseball in a glove. It’s subtle but pleasing at the same time.

Their Story: (2:55) Meet the actual participants and hear them tell their story.

Training Camp: (6:18) Here we get a glimpse of the physical training the young Indian actors endured to play athletes in the film.

Million Dollar Music by A. R. Rahman: (2:34) A look at some of the themes used in the film for certain scenes.

Deleted Scenes: (2:28) There are three with a play-all option.

Alternate Ending: (:48) The one used is much better. This one makes the ending more about JB and Brenda.

Million Dollar Arm is an old-style Disney film, which means it is a film for the whole family and has a PG rating, but what was once acceptable for the whole family is different than what it once was. I think the story is very effective and a worthwhile one to tell. It’s nothing earthshaking, just good old fashioned storytelling. The cast is terrific, and I didn’t even mention Bill Paxton as an unconventional trainer.