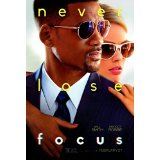 Focus makes for a breezy, lively option during what is traditionally a dead zone in the movie calendar. Naturally, the final act has some swerves that you may or may not see coming. It’ll largely depend on how hard you’re looking, even though Ficarra and Requa’s script overly telegraphs one such twist. (Nicky is speaking to the audience as much as he is to Jess whenever he’s doling out wisdom.) For the most part, the filmmakers — like their wily protagonist — do a good job of making sure the audience looks where they want us to look.