Posted in: Disc Reviews by Brent Lorentson on February 26th, 2015 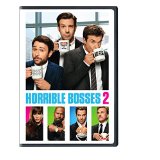 Despite being a fan of just about everyone involved with Horrible Bosses, I was more than a little disappointed by the first film.  It wasn’t awful or unwatchable by any stretch of the imagination, but I felt with a cast like Jason Bateman, Charlie Day, and Jason Sudeikis, it just should have been better.  But the movie gods have spoken and decided that the first film performed well enough that it deserved a sequel.  What worked for the first film was the idea behind finally having enough of your bosses and being pushed to the point where murder seems like a viable option.  We’ve all had bosses at some point that pushed our buttons to the point that these thoughts may enter our daydreams, so a movie that takes it to the next level will of course have its appeal.  Sadly, the sequel doesn’t have that appeal.

This time around Dale (Day), Kurt (Sudeikis), and Nick (Bateman) are working together to release a new shower product, and after the trio make an appearance on a morning news broadcast they get the call from an interested investor.  Rex (Chris Pine) claims to see promise in their product, as does his father Bert (Christoph Waltz). The father and son duo end up scheming the trio out of their product, which results in them going $500,000 in debt.  With their options limited, the trio decides the best way to avoid going into debt is to kidnap Rex and hold him for ransom.  It doesn’t take much thought to realize how bad an idea this scheme is, but the film wouldn’t be much of a comedy if this were a good scheme to begin with.

There are some familiar faces returning for the sequel. Jennifer Aniston steps back into the role of the nymphomaniac dentist.  Jamie Foxx makes a return as the criminal consultant for the guys as well.  The problem is they serve nothing to the plot other than to remind us of the first film.  But reviving these characters and giving us nothing new to explore with them only points out how much funnier the first film was by comparison.  There is so much talent involved with this film, I just can’t figure out how it manages to do nothing more than plod and make the gravest mistake and not be funny.  The cast is trying here, and sure they seem to be having fun, but this managed to be only mildly amusing at best.

What is most offensive about this film isn’t even its humor, but instead it is the level at which it seems to talk down to its audience.  At no point in this film do I believe any of these characters could exist in the real world as functioning adults. The world these characters live in is what you’d expect from a 14-year-old who embraces the simple things in life like dick and fart jokes and has no ambition to evolve.  There are moments in the film where we could have seen these characters face reality and face the consequences of their actions, or simply have to struggle at some point.  Instead these characters are navigating on a sixth sense of stupidity that seems to keep them out of trouble.

While watching this, though, what jumps out at me is that this time around the horrible bosses are none other than Nick, Dale and Kurt.  They go about hiring a staff that is unqualified or works for them illegally, only to put themselves in a position where they lose their own business.  Is it intentional that they unintentionally become the people in position that in the previous film they hated?  I hope this was intended, but considering we have characters who run a 12-step program for sex addiction in a dentist’s office, and characters trying to kidnap themselves, I can’t imagine anything could be intentionally clever with this film.  I wanted to like this.  I hoped it would outshine the original, but it didn’t happen.  This is one of those examples that shows that not every successful movie deserves a sequel.

Horrible Bosses 2 is presented in a 2.40:1 aspect ratio.  The 1080p image is arrived at with an AVC MPEG-4 codec at an average of 26mbps.  When it comes to most comedies, the overall look of the film doesn’t seem to hold much esteem as compared to genre films or your average drama.  Horrible Bosses 2 is no exception.  The image appears to be soft at times, and the skin tones don’t seem to be as warm as you would expect.  There isn’t a lot of color in the film. It has a relatively drab tone to it, but thankfully the film is artifact-free and had no compression issues with the exception of a few moments in the night shots where the blacks appeared a bit crushed.

The DTS-HD Master Audio 5.1 track is effectively used during the film’s few-and-far-between action sequences.  The score, mostly comprised of modern top forty music, fills the soundtrack and sounds great.  Most of the film is comprised of numerous scenes that rely on dialog, which is presented crisp and clear in this presentation.

Endless Laughter Guaranteed: (17:28)  Someone was being a funny guy with titling this behind-the-scenes feature that is comprised mainly of interviews with the cast with some making-of footage edited in as well.

Let the Sexual Healing Begin: (2:24)  An infomercial for the sexual addiction group we see in the film.

Who Invented the Shower Buddy: (1:29) The cast remains in character as they are interviewed and discuss who really invented the product that gets them into the mess they are in during the film.

Nick, Kurt, Dale Inc. Employee Testimonials: (2:13)  A simple short video about working with the guys at their factory to mass produce the Shower Buddy.

High Speed Crash Course: (2:47) Behind the scenes for the films climatic car chase.

Off the Cuff:  Multiple segments where we get to see the cast go off the script and ad-lib in numerous sequences.

In a time where sequels and comic books rule, this is a prime example as to why the studios shouldn’t be so quick to release an unnecessary sequel.  This has a great cast and so much potential but just never had the story to deliver the hit that this should have been.  I’m sure there are people out there that will disagree with me, but this might be one of the worst sequels in a long time.

Brent Lorentson is a horror writer and film critic based out of Tampa, Florida. With a BA in Digital Film, he co-wrote and co-directed Scavenger Hunt. His short stories have appeared in various horror anthologies. In 2019 his short script Fertile Blood will be a part of the anthology horror film Slumber Party. He is currently working on his first novel A Dark and Secret Place set to be released in late 2019. Favorite Films: Taxi Driver, Fight Club, I Saw the Devil, The Wild Bunch, Dawn of the Dead, A Clockwork Orange, Pulp Fiction, Heathers, The Monster Squad, and High Fidelity.
The Homesman (Blu-ray) Focus