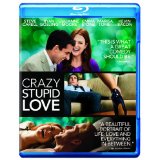 Ryan Gosling’s 2011 made the rest of us look like a bunch of slackers. When he wasn’t breaking up fights on the streets of New York City or inspiring countless memes last year, he was starring in three incredibly varied and well-received movies. The curiously punctuated Crazy, Stupid, Love. is the most commercial of those releases and also features Gosling at his movie star/leading man best. Steve Carell stars as Cal Weaver, a middle-aged man who is blindsided after his wife, Emily (go-to-adulteress-of-the-moment Julianne Moore, of The Kids Are All Right and Chloe), reveals she had an affair with a co-worker (Kevin Bacon) and asks for a divorce. While drowning his sorrows at a stylish local bar, Cal catches the eye of ladies’ man Jacob (Gosling), who decides to take clueless Cal under his wing and help him navigate the singles scene.

For a while, directors Glenn Ficarra and John Requa along with screenwriter Dan Fogelman, seem content to make Crazy, Stupid, Love. into a less-slapsticky, slightly sharper version of Hitch. Carell and Gosling, an unlikely and terrific comedy duo, make those scenes come alive, and they are the best bits in the movie. Carell balances his sad-sack character with enough charm and humor to make you believe women would find him attractive, while Gosling admirably and completely commits to playing a smooth-talking operator with the same fervor he brought to playing a drug-addicted teacher (Half Nelson) or a fiercely anti-Semitic Jew (The Believer).

In fact, I’d say Carell and Gosling had better on-screen chemistry with each other than they did with any of their love interests.

That’s more of a compliment to Carell and Gosling than it is an insult to Moore, Marisa Tomei (as a sex-crazed love interest of Cal’s) or Emma Stone (very appealing as the girl who melts Jacob’s cold lothario heart.) It’s just that those other relationships aren’t as fully developed. For example, the intriguing idea that Emily (the woman) is the one potentially going through a mid-life crisis is brought up, but never really explored.

That’s probably because the movie tried to cram one too many subplots into its story. I mean, it isn’t enough that Cal and Emily’s babysitter (impressive former America’s Next Top Model contestant Analeigh Tipton) has a crush on Cal, but Cal and Emily’s son, Robbie (Jonah Bobo) also had a major crush on his babysitter. All the various story threads eventually come together in the end, though I probably could’ve done without the embarrassing/sappy speech about love in a public setting.

The video is in 2.40:1 widescreen presentation at 1080p resolution. Crazy, Stupid, Love. may not be the first (or 50th) movie I’d pop in to test drive a new TV’s picture capabilities, but the Blu-ray provides an impressively sharp picture. This is especially true of Ryan Gosling’s abs, which are presented in a way guaranteed to either delight you or make you feel like a bum for already bailing on your New Year’s Resolution to work out more. This surprisingly stylish romantic comedy looks very good on Blu-ray.

The audio is presented in a 5.1 DTS-HD Master Audio track. This being a comedy, I was particularly interested in seeing (or rather hearing) whether the dialog and jokes would be easy to hear and understand (particularly Carell’s throwaway lines). The track delivers quite well on that basic level. There are also more than a few scenes that take place in a crowded bar/club, and I found the audio mix of background music and dialog to be very well balanced.

Steve and Ryan Walk Into a Bar: (6:40) An amusing on-the-set visit with star/producer Carell and Gosling which confirms their on-screen chemistry translates behind the scenes. The actors discuss their characters and the movie in a self-deprecating way with Carell doing most of the talking/riffing, while Gosling tries to steal the show with his deadpan reactions.

The Player Meets His Match: (5:40) More of a standard (read: more boring) behind-the-scenes look at Gosling and Stone’s characters.

Deleted Scenes: (12:27) In all, there are 14 different “deleted scenes” included. Nearly half of them are extended versions of material included in the theatrical cut. For me, the biggest bummer is that we don’t get the option to watch each deleted scene individually: they all play as a single, continuous track.

I really enjoyed Crazy, Stupid, Love. because it is smarter (and funnier) than the average contemporary romantic comedy. The film translates surprisingly well to Blu-ray from an audiovisual perspective, but I found the special features to be a bit scant. (No bloopers/outtakes of Carell riffing? Boo!)