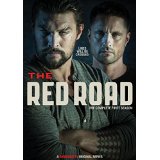 Even though one of the main characters in The Red Road is a police officer, the show’s six-episode first season plays less like your typical cop drama and more like an extended profile of two strained communities. There’s the fictional town of Walpole, N.J. and the Lenape tribe that lives in the neighboring Ramapo Mountains. While the show certainly touches on the tension between the two communities, too much time here is devoted to multi-generational family drama that we’ve seen before. In other words, the show too often neglects the things that make it unique.

“Bad things happen in those mountains.”

Since this first season only has those six episodes, we’re immediately thrust into the story. (I actually double checked to make absolutely sure I hadn’t started with the second episode by accident.) Phillip Kopus (Jason Momoa) is a Lenape ex-con who has just returned home and is already mixed up in some nasty business. He and his crew have to dispose of a dead college kid who was buying drugs from them. Meanwhile, Officer Harold Jensen (Martin Henderson) is working to track down the student, who is classified as a missing person.

Phillip and Harold are both local boys who share a history together. They form an uneasy alliance after an accident involving Harold’s alcoholic wife Jean (Julianne Nicholson) and a young Lenape boy leaves the Jensens indebted to Phillip. It only adds to the tension between the two families, since the Jensens’ oldest daughter Rachel (Allie Gonino) is dating Phillip’s younger brother Junior (Kiowa Gordon).

The Red Road is created by Aaron Guzikowski, who previously explored the ways that tragedy can shatter a tight-knit family or community in his script for Prisoners. (Which I liked a lot.) Here, however, I think he went a little overboard with the way the characters are interconnected. For example, Rachel and Junior’s present-day romance isn’t enough; we also learn that Jean and Phillip had their own Capulet and Montague-style connection back when they were in high school, which may have led to the death of Jean’s twin brother. There’s also a sorely under-explored subplot about the Lenape seeking recognition from the federal government, so naturally the tribe’s chief happens to be Phillip’s uncle. I know it’s a small town, but still…

Instead of straining to show us how all of these characters share a past with one another, I think the The Red Road would’ve benefited from focusing on the things that make it stand out from the increasingly-crowded pack of serialized dramas. Simply put, there aren’t very many TV shows (or movies, or anything) with Native American characters at the forefront. (At least not unless there’s a casino involved.) But other than the glimpses we get of the process to gain federal recognition — which sounds boring, but imagine what somebody with half the talent of David Simon could do with material like that — you could easily replace the Lenape with any downtrodden minority, and you’d have virtually the same show.

There’s potential here because the most interesting moments involve the Lenape characters. Momoa — our future Aquaman — is a towering presence; his severe brow is more interesting than anything Henderson does. The actor’s magnetism makes it totally believable that Phillip could charm the little brother he just met into a life of crime, and that Phillip’s guarded mom Marie (Tamara Tunie) could never truly stop trying to help him. Momoa also gets to interact with the two most prominent guest stars of season 1: Tom Sizemore pops up to play Jack Kopus, Phillip’s spectacular scumbag of a dad; and Lisa Bonet (Momoa’s real-life wife) plays Sky Van Der Veen — that’s really her name — a Lenape lawyer who (unlike Phillip) was able to get out of town and make something of herself.

By comparison, the Jensen family drama — warring spouses, rebellious teenage girls — feels comparatively cliched. Henderson does what he can with the harried Harold, but the odds are stacked against the actor: Harold appears to be bad at being a cop, bad at being a husband, and bad at being a father; so it’s hard for the audience to invest in him as any sort of hero. (Or even a flawed anti-hero.) Nicholson, so great and controlled on Masters of Sex, is essentially stuck playing an out-and-out crazy person for the first half of the season, but is able to find some layers when her character becomes more clear-eyed and learns of a betrayal from the past.

The bodies don’t really start dropping until Ep. 4/“The Bad Weapons.” It all crescendos during a bloody final 15 minutes in the finale/“Snaring of the Sun” that leaves Phillip and Harold tied closer together than ever.

The Red Road: The Complete First Season features all six episodes on two discs. Disc 2 also has the set’s bonus material, which includes deleted scenes and behind-the-scenes featurettes. This show is SundanceTV’s second stab at original scripted drama, following the well-received Rectify. And that doesn’t even count similarly well-reviewed miniseries like Top of the Lake and The Honourable Woman.

Season 2 of The Red Road is set to premiere April 2, and it’ll be interesting to see what the show chooses to focus on. The good news: Bonet’s return seems to indicate more of an emphasis on Lenape politics and the tribe as a whole; the less-good news: we don’t even make it to the 0:20 mark of the season 2 trailer before the word “casino” is uttered. (Sigh) Oh well…here’s hoping The Red Road carves out a more interesting path going forward.

Exclusive Interview With Michael Seater From Bank$tas The Salvation