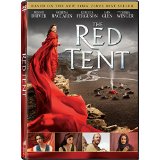 When you think about the biblical stories that have made it onto the big (or small) screen, they tend to focus on names like Jesus, Moses and Noah. (And Moses again, just for good measure.) To be honest, I didn’t even realize how few Bible adaptations focus on women until I popped in The Red Tent, a Lifetime miniseries based on Anita Diamant’s best-selling novel of the same name. While The Red Tent certainly shouldn’t be taken as gospel, it deserves credit for exploring biblical events from a different perspective.

“For thousands of years, I’ve been lost to the world. My name means nothing to you.”

The Red Tent is the story of Dinah (Rebecca Ferguson), a relatively minor character in the Bible. She’s best known as the daughter of Jacob (Iain Glen); also, her brother Joseph (Will Tudor) has weird dreams and wears a colorful coat. However, those better-known biblical figures are largely supporting players in The Red Tent because the story lavishes much more attention on the women in Dinah’s life.

Jacob has four wives, including Dinah’s sharp, sensible mother Leah (Minnie Driver). The most beautiful among the wives is Rachel (Morena Baccarin), a shameless romantic and talented midwife who fills the role of “cool aunt” in raising Dinah. The titular tent is “where women went to bleed during the full moon” and serves as a much-needed spiritual sanctuary for the female members of Jacob’s community. (There’s practically a “No Boys Allowed” sign hanging out front.)

The 176-minute miniseries is split into two parts, with each section having its own set of pros and cons. Much of the early parts of Part 1, for example, are saddled with exposition and explanatory voiceover narration from Dinah as she reveals the purpose of the red tent and introduces us to the *many* members of her family. There’s a lot of territory to cover, since Part 1 not only takes us from Dinah’s childhood into her passionat romance with a dashing prince (Sean Teale), but it also flashes back to show us how Jacob fell in love Rachel, married her…and how he came to be with Leah on his wedding night.

Part 2 picks up shortly after a tragic event at the end of Part 1, and is generally more of a downer. However, I also found it to be the more focused and compelling of the two parts, as Dinah becomes more guarded and independent following tremendous losses. The bad news is the heavy focus on Dinah during Part 2 means that good actors like Driver, Baccarin, Glen, and Debra Winger — as haughty oracle (and Dinah’s grandmother) Rebecca — are mostly MIA.

The good news is Ferguson — as she did in The White Queen — ably carries the storytelling burden by convincingly transforming from a wide-eyed innocent into a steely survivor. Baccarin is appropriately lovely and makes Rachel a charismatic role model for Dinah. Unfortunately, Driver — as Dinah’s actual mother — doesn’t get as much to play; we’re told early on that Leah is the most cunning of Jacob’s wives, but the movie doesn’t allow us to see her contribute much more than concerned glances in Dinah’s direction. Glen makes for a solid, well-meaning, stressed out Jacob. Tudor is fine as Joseph, but it felt like the film had to do a little extra work to include him and his prescient visions in the story. Winger clearly had fun with her all-too-brief appearances, and I enjoyed Darwin Shaw’s low-key work in Part 2 as kind, gently-intrusive carpenter Benia.

The Red Tent was filmed in Morocco, and boasts some nice vistas. Too bad director Roger Young — who has more than 50 TV credits on his resume — never lets us forget that he’s working for the small screen. To be fair, there aren’t any grand set pieces in this miniseries that we’re missing out on by having someone like Young direct, but the plot — which should be considered historical fiction based on Diamant’s novel, not on the Bible itself — unfolds in an episodic way that might have been smoothed out by a different filmmaker.

Then again, the performances here are good, the love scenes are basic-cable tasteful, and the (partial) nudity mostly revolves around the guys. In other words, what more could Lifetime movie/miniseries fans ask for?

Teeth and Blood Run All Night