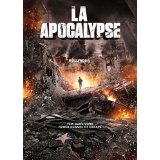 “The recent earthquakes in Los Angeles: facts of life or foreshadowing the big one?”

I’m not saying the makers of L.A. Apocalypse — a SyFy-level TV movie centered on catastrophic earthquakes in California — timed the release of their low-budget action flick so it premiered well ahead of San Andreas, the would-be summer blockbuster starring Dwayne Johnson about catastrophic earthquakes in California. It’s just funny how things often work out that way. L.A. Apocalypse doesn’t have The Rock (or anyone you’ve likely heard of) and is working with a very small fraction of San Andreas‘ budget. The result is as underwhelming as you’d expect.

We quickly learn the entire planet’s core has destabilized and caused massive earthquakes on a global scale. Of course, a movie like L.A. Apocalypse only has the resources to show us what’s happening in one particular city. Calvin (David Cade) plans on proposing to his girlfriend Ashley (Gina Holden) until a massive earthquake rips Los Angeles in half. While Ashley is trapped beneath her office building with two increasingly annoying co-workers, Calvin races across town to get to her.

And as if a devastating natural disaster weren’t enough of a hurdle for Calvin to overcome, the city has become overrun with convicts who escaped detention thanks to the earthquake. For some reason, the cons all answer to Carlos Dorado (Kamar De Los Reyes), who has his minions roaming the cities for hostages so he can escape to Mexico. (Carlos doesn’t seem to mind that the whole planet is being torn to shreds by earthquakes.) The city is being evacuated by military personnel and Calvin teams up with Lt. Grisham (Christopher Judge), who agrees to help him find Ashley. Eventually, all the relevant parties — Calvin, Grisham, Carlos’ convicts, and Ashley’s group — collide and try to escape Los Angeles before the city collapses around them.

Speaking of “escaping” from a major city, L.A. Apocalypse would’ve benefited greatly if it at least tried to tap into the anarchic spirit of John Carpenter’s Escape From New York. (Heck, I would’ve settled for spoofy weirdness on par with Escape from L.A., which is also set in La-La Land following a massive earthquake.) Instead of having fun with the concept of escaped convicts running the city, the extent of that plot thread is a sad quartet of orange jumpsuit-clad tough guys who are dispatched relatively easily. (I guess crime is down in Los Angeles, and prison was underpopulated.)

Cade (Nickelodeon’s Big Time Rush) and his aggressively scraggly beard makes for a handsome, reasonably bland hero. (Calvin conveniently knows how to handle himself in hand-to-hand combat.) He’s kind of like a homeless man’s Chris Evans. Holden seems to fare a bit better, but that’s probably because Ashley is surrounded by the two most irritating characters in the movie and doesn’t seem so bad by comparison. De Los Reyes doesn’t bring anything interesting to the table to his exotic mad man role. (His performance is all self-important monologuing and ranting into walkie talkies.) Even Raymond J. Barry — so great and scummy on Justified as the world’s worst dad — can’t find a single interesting thing to do in his role as the major in charge of evacuating Los Angeles. Only Judge (Stargate SG-1) escapes with his dignity intact, but even his straightforward work feels like an awkward fit here.

Despite being a SyFy-level production, L.A Apocalypse refuses to go all-in on the cheesiness. On one hand, there’s obviously nothing wrong with trying to make a disaster movie that is legitimately good. The most we get is actors running away from thoroughly unconvincing visual effects and plenty of camera shaking while the performers stagger around to simulate an earthquake. You can always make up for budgetary shortcomings with inspired storytelling, but L.A. Apocalypse is a cliché parade. (Guy desperately trying to save his damsel in distress? Check. Stale strategic military scenes? Double check!)

In the end, this severely limited film simply doesn’t have the ability to stage a convincing — or entertaining — Apocalypse.

The Hobbit: The Battle of the Five Armies (Blu-ray 3D) Exclusive Interview With Laura Jacobs From Muck