Posted in: Disc Reviews by Gino Sassani on September 21st, 2015 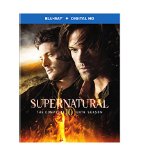 “‘Tis the season for Demon Dean.”

It’s almost like some twisted holiday season. Each season finds the Winchester Brothers in some way divided following an apocalyptic event. The world might be saved once again, but Either Dean or Sam is in Hell or Purgatory. One might be living in an alternate reality or just in a coma. This season starts with the tradition very much alive as the Mark of Cain has finally turned Dean into a demon, albeit one who loves to do bad karaoke. His partner in crime isn’t his brother Sam, but the King Of Hell himself, Crowley. What a jolly mess this has turned out to be. Now we have another full season on Blu-ray to try and work this thing out. But can Dean be returned to human form, and can the Mark of Cain be removed without… you know… starting another apocalypse? Probably not, but at least the ride ought to be a blast…sometimes literally. It’s Supernatural, and it’s a milestone 10th season, and it’s available now.

“That there’s the kill switch. This is the remote.”

While Sam is off having his demon bromance with Crowley, Sam has been going down a particularly dark road himself. He’s going to any extreme to find Dean and to cure him. He’ll torture demons and even push an innocent man into a deal with a crossroads demon. One thing this series as demonstrated more than monsters is the bond between these two brothers. They will go as dark as necessary to save the other. Usually it’s Dean who is going to great lengths to save Sam. This time it’s reversed, and I rather like the results. The only flaw is that they didn’t play it out quite as long as I hoped. The chemistry going between Dean and Crowley was pretty great stuff, but it ends in less than a handful of episodes. Dean’s human again but still wrestling with the Mark of Cain. If you’re wondering why Sam is wearing a sling, it’s because the actor injured himself messing around at a convention.

“We’ll have fun, fun, fun till your Daddy takes the black eyes away.”

As much as I quickly missed the Demon Dean/Crowley moments, I was rather pleased to see most of this season return to the kind of shows that keep me coming back for more. I don’t know if I’m a typical fan, but I’ve always liked the show when it got back to the roots of Dean and Sam hunting down creatures and such. The big end-of-the-world stuff was never my favorite aspect of the show. If you’re like me, you’ll find little of that kind of thing until the cliffhanger where Dean has a real chance of losing the Mark. But as Once Upon A Time has told us ad nauseam, magic comes with a price, and it appears this one is going to be global.

The bunker is still here, and I have a bit of a love/hate relationship going on. It’s a very cool place, and it opens the show up to so many new possibilities. It also appears to make the writers a little lazy. They lean on it for respite and safety a bit too much. I also don’t like the use of a sudden find in the bunker solving our problems. It does get invaded this season, so perhaps it’s not the safe house it used to be.

Heaven has reorganized, and for a while Castiel has a mission with Hannah. They are tracking down angels who fell during the last big blast and returning to Heaven those who don’t want to go back. Castiel also has to deal with the person of the man he possessed when he took his human form. He looks after the man’s troubled daughter as best as he can, but she’s getting into trouble. The wife has spent two years being fed off by an ancient species of angel once thought extinct. Throughout there are some pretty emotional moments as Castiel deals with the ramifications of his arrival on Earth. Castiel’s “borrowed” grace is failing, and he’s dying and unwilling to kill another angel to recharge. It’s Metatron who has his own real grace hidden, and he’s going to kidnap him from Heaven’s prison to get it back.

Crowley is having his own problems since Dean went his separate way. He’s trying to run a better Hell. It’s a residual of the process that almost turned him human last season. The problem is that his minions consider it to be a sign of weakness, and he’s pretty much bored with ruling Hell. But he’s got plenty to take his mind off matters when Mother Rowena comes into the picture. She’s a great addition. She’s manipulating Crowley in rather amusing ways. She wants revenge on the coven that keeps her from reaching her full potential, and she’s not so happy with how Crowley keeps getting played by the Winchesters and he lets them live.

The show delivered its 200th episode this season, and it’s a bit of a special one. It’s called Fan Fiction and finds the boys tracking down a job at a high school where the all-girl students are putting on a musical version of Supernatural. The songs are OK. This is no full-blown musical episode like Buffy or Grey’s Anatomy did. It’s just the stage show that uses songs to tell the story of the boys “On The Road So Far“. The expressions on the boys’ faces are priceless and worth the cost of admission just by themselves.

The 10th season returned the show very much to its roots. I have to admit that I’m less fond of the huge end-of-the-world story arcs and more fond of the weekly adventures of the brothers hunting down creatures of evil. This season has more than the usual number of those. While Dean’s fight to get rid of the Mark of Cain dominates the season, it doesn’t keep the boys from having some great episodes of hunting time.

We get to see two beloved characters return. Charlie (Day) returns from Oz split in two like the famous split Kirk episode of Star Trek. The boys must help reunite her evil and good selves once again. She’ll return again to help steal and translate the Book of the Damned in Sam’s effort to help Dean which will involve dealing with the evil Rowena, and of course, it’s all behind Dean’s back. As one character points out, that never ends well.

My favorite character from the old days his Bobby (Beaver), and he gets to lead a revolt in Heaven as part of the plans to help Dean. There’s just something about Jim Beaver’s performance that makes Bobby such a great character and one I miss seeing on a regular basis still. They have to find a way to get him back to the living.

One of the better episodes is About A Boy. It lets us know what happened to Hansel and Gretel as the boys track down a monster that leaves only the victim’s clothes behind. It’s Hansel helping out the old witch by turning people back into children so the witch can eat them. Dean ends up 14 again, and hats off to Dylan Everett who plays the teen Dean.

Comic Con 2014: (28:54) These visits get to be a mainstay on these Warner features. They’re a ton of fun and get to show how much enthusiasm these fans have for these shows.

Supernatural Theatre – Staging the 200th Episode: (25:25) A nice behind the scenes look at the musical staging of the 200th episode. From recording sessions to the rehearsals, we get a nice look at how it all came together. They pretty much treated the stage play within the episode as if they were producing a play.

The Winchester Mythology – Battling the Mark and Blade: (20:50) If the whole Mark of Cain thing is a bit confusing, this feature helps cover the important points. Cast and crew will help guide you through it all.

Supernatural Fans: (56:28) This is a nice look at the show’s super-fans. A few are highlighted, from a girl who assembled an incredible set of Castiel wings to a hand-carved wooden chess set featuring characters and elements of the show.

A Very Special Supernatural Special: (29:50) Cast and crew remember the best and worst of 10 years of the series.

It’s a pretty solid season for a show entering its 11th season this year. Both Castiel and Crowley have been great in expanded roles over the last couple of seasons, and there’s hope for more, although the finale doesn’t look good for Castiel at all. We’ll have to wait for next season to find out. Yeah, they’re playing with us a little but come on, “Who doesn’t like a little torture?”

Gino Sassani is a member of the Southeastern Film Critic's Association (SEFCA). He is a film and television critic based in Tampa, Florida. He's also the Senior Editor here at Upcomingdiscs. Gino started reviewing films in the early 1990's as a segment of his local television show Focus. He's an award-winning recording artist for Omega Records. Gino is currently working on his 8th album Merchants & Mercenaries. Gino took over Upcomingdiscs Dec 1, 2008. He works out of a home theater he calls The Reel World. Favorite films: The Godfather, The Godfather Part II, The Body Snatcher (Val Lewton film with Karloff and Lugosi, not the pod people film), Unforgiven, Gladiator, The Lion King, Jaws, Son Of Frankenstein, The Good, The Bad And The Ugly, and Monsters, Inc.
Black Mass Cinderella (2015) (Blu-ray)