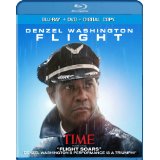 Can a scumbag also be considered a hero? Lance Armstrong fans probably mull that question each time a new, unsavory revelation about the now-disgraced cyclist comes to light. The issue was addressed in 1992’s Hero, which starred Dustin Hoffman as a low-life who saves a group of passengers on a crashed airplane. Flight also takes to the not-so-friendly skies to examine whether it’s possible to reconcile a lifetime of destructive behavior with an extraordinary act of valor.

You wouldn’t necessarily guess that from the film’s punchy trailer, which painted Flight as a cynical gloss on the Sully Sullenberger story. (The movie’s protagonist even has a similarly folksy, alliterative name: Whip Whitaker.) Instead, Flight is an R-rated drama that presents one of the most unflinching portrayals of drug and alcohol addiction you’re likely to ever see in a mass-appeal film from a big-time director and starring one of the world’s most famous movie stars.

Denzel Washington stars as Whip, a divorced airline pilot who achieves overnight fame when he performs a daring mid-air maneuver that saves nearly 100 lives. Unfortunately, Whip is also a heavy drinker who snorts a line of cocaine before he’s even had a chance to grab his morning coffee. So it’s not exactly a surprise when a toxicology report reveals he had alcohol in his system on the day of the ill-fated flight.

As officials investigate the crash, Whip tries to dodge manslaughter charges with help from colleague Frank (Bruce Greenwood) and attorney Hugh Lang (Don Cheadle). More importantly, he constantly battles guilt over the people he couldn’t save and tries to resist the urge to climb back into a bottle while bonding with fellow addict Nicole (Kelly Reilly).

If this sounds like heavy stuff, it absolutely is. Flight also seems like an odd project for Robert Zemeckis to choose for his comeback after a decade-long motion capture animation vacation. Then again, Zemeckis may have actually been jonesing to do an R-rated drama. Though the desert island shenanigans in Cast Away — Zemeckis’ last live action film, way back in 2000 — got most of the attention (R.I.P Wilson), people tend to forget the director gave us one of the most harrowing plane crashes in recent movie history. The crash sequence in Flight is equally gripping and outstanding.

Zemeckis (Forrest Gump, the Back to the Future trilogy) has also made a few of the most popular films of all time, and he brings that crowd-pleasing touch to some of Flight’s darker moments. Don’t get me wrong; the director and writer John Gatins — who based his sharply observed screenplay on his own struggles with alcoholism — doesn’t make a mockery out of addiction. It’s just that Zemeckis is savvy enough to stage moments that cast a hotel minibar as the movie’s main villain or make audiences wince every time Whip knocks back a drink. He’s also unafraid to let a popular song — “Feelin’ Alright” by Joe Cocker, or “Under the Bridge” by the Red Hot Chili Peppers — underscore a scene.

Of course, the director gets a huge assist from his star. Washington — in his latest Oscar-nominated performance — is excellent, vanity-free, and perfectly cast as Whip. His movie-star swagger is on display during the character’s more arrogant moments, and the actor’s commanding screen presence makes him totally believable when the plane starts to go down and Whip takes charge. Most importantly, Washington has garnered so much goodwill among moviegoing audiences that we subconsciously root for him to stay on the wagon even as his character’s behavior becomes increasingly deplorable (though I will say the lively audience at my advance screening was very consciously invested in Whip, audibly groaning every time a liquor bottle appeared on screen.) Washington hasn’t been this challenged in years, and he rises to the occasion.

Since this is very much a character study/one-man show, there’s not a ton for the talented supporting cast to do. Cheadle’s considerable skills are mostly squandered in his role as a win-at-whatever-cost lawyer who clashes with the destructive Whip. (Fans were surely excited for the Washington/Cheadle Devil in a Blue Dress reunion. Or maybe that was just me.) John Goodman scores the film’s heartiest laughs as Whip’s flamboyant supplier. (Fans were surely excited for the Washington/Goodman Fallen reunion. That was definitely just me.) Goodman turns up for a final act sequence that will likely be a big hit with audiences, but I felt veered too much into silliness and undermined the drama. Meanwhile, Oscar winner Melissa Leo doesn’t even speak until the very end as a formidable adversary of Whip’s.

Then there’s the character of Nicole, who seemed to be set up as Whip’s love interest/salvation, but winds up being almost entirely inconsequential. Reilly gives a fine performance, but Zemeckis could’ve completely cut her out of the movie with no ill effects and kept his film’s 138-minute running time under two hours. (The fact that she’s almost completely MIA from the movie’s trailer is another strong hint that she’s not exactly essential.)

Flight is presented in its original aspect ratio of 2.40:1. The 1080p image is arrived at with an AVC MPEG-4 codec at an average 27 mbps. The order of the day here is realism. Everything about this high-definition image presentation screams natural. The colors are pretty much reference, particularly flesh tones. It’s the close-ups of Washington that portray the greatest detail and texture. Washington’s expressions are key to his performance, and the camera work shows a great understanding of that fact. Black levels are deep and inky. You get some wonderful shadow definition that nicely reflects the darkness that Whip experiences in some key moments of the film. The crash sequence is beautifully reproduced here and is one of the best Blu-ray sequences you’ll find.

The DTS-HD Master Audio 5.1 is always doing its job. When the story calls for loud and busy, that’s exactly what you get. Again, it’s the crash sequence that provides a wonderful mix of sounds, dialog, and surround immersion. Washington is often soft-spoken here, and the mix picks it up perfectly. When the story calls for those quiet reflective moments, you get exactly that. While I’ve certainly experienced more dynamic sound, I’ve seldom encountered an audio presentation that was so spot-on appropriate throughout.

Origins Of Flight: (10:29) Writer John Gatins explains the process that started back in 1998 when he boarded a plane and had an uncomfortable flight sitting next to an airline pilot. He’s right when he tells us that we really don’t want to know our pilots are human with issues and mundane problems. Cast and crew join in to fill in some of the story’s evolution.

The Making Of Flight: (11:31) Cast and crew offer the usual sound-bites. This is pretty much the standard love-fest, but there are some good behind-the-scenes moments to enjoy.

Anatomy Of A Plane Crash: (7:46) No doubt about it. The crash is the “big” moment in the film. This feature gives you a good look at how it was done. There’s concept art, pre-viz, and a look at filming with a cabin set that can be rotated a full 360 degrees.

Q&A Highlights: (14:18) The L.A. Times hosted a get-together of all of the principal cast and crew with the notable exception of Washington. We’re told he was ill and could not attend. I don’t know why, but I had flashes of Whip on a bender. They field questions from an audience about the film.

Making a movie about drug and alcohol addiction that is respectful, truthful, and entertaining is a tough task. (Functioning Addict would’ve been a more appropriate title for Flight, but I don’t see people lining up for Functioning Addict on a Saturday night.) Though some of the lighter moments occasionally knock the story’s tone out of whack, both director and (especially) star deliver this difficult material with the same blunt-force panache Whip used to land his plane.