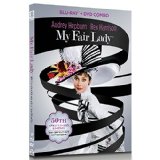 Of course, we don’t need 50 years of hindsight — or more than 100 years, if you want to go all the way back to the original 1913 staging of George Bernard Shaw’s “Pygmalion” — to know that there’s nothing common about cockney flower girl Eliza Doolittle. And there’s nothing ordinary about 1964’s My Fair Lady, the beloved Oscar-winning musical that now gets an uncommonly (but appropriately) lavish 50th anniversary Blu-ray update courtesy of Paramount.

Chances are you know the story. But even if you don’t, its rags-to-riches DNA can be found in everything from Cinderella to Pretty Woman. In early 20th century London, Henry Higgins (Rex Harrison) is a brilliant and unbearably arrogant phonetics scholar who can spot a person’s place of origin simply by hearing them utter a few words. Higgins is fascinated by the English language, but also bemoans its current state. The movie opens in London’s Covent Garden as Higgins studies a particularly inarticulate flower girl named Eliza Doolittle (Audrey Hepburn) as if she were an animal in the wild. Higgins brags to new acquaintance and fellow phonetics expert Col. Hugh Pickering (Wilfrid Hyde-White) that he could coach any person to speak and carry themselves well enough to pass as nobility during an upcoming ball. Eliza — whose Cockney accent prevents her from working in a proper flower shop — decides to show up at Higgins’ doorstep and put his skills to the test.

You can probably guess how things turn out, but the scenes of Eliza enduring Higgins’ comically cruel tutelage still crackle and are among the film’s best. My Fair Lady is based on the wildly successful musical of the same name, and director George Cukor (The Philadelphia Story, Adam’s Rib) made a faithful adaptation that keeps one toe on Broadway while the other is firmly planted on the spectacular sets Warner Bros. built for this production. The talky songs/scenes make it difficult to shake the story’s stage origins, and Cukor keeps his camera trained on his stars for relatively long stretches. However, the film — with a big assist from designer Cecil Beaton — features plenty of spectacle (most notably in the deliriously posh Ascot Racecourse sequence) and grand scope (even the shabby Covent Garden set from the beginning is a marvel).

There’s also some interesting material here about the traits society values in a person (all you need is to enunciate in a pretty dress to mingle with royalty) and how people are thoughtlessly discarded once they’ve served their purpose. However, Cukor is sometimes a little too faithful and reverent to the source material, which means the film occasionally lurches toward the end of its 173-minute running time. (Including an Intermission.) Some of the musical numbers involving Eliza’s opportunistic father Alfred (Stanley Holloway) are quite good — especially the wonderful “With a Little Bit of Luck” — but ultimately feel drawn out and inessential to the story. (I mentally changed the title of final-act tune “Get Me to the Church on Time” to “Get Me to the End Right Now.”) I realize other musicals of that era boasted butt-numbing running times, but My Fair Lady doesn’t have the visual virtuosity of West Side Story or the range of characters in The Sound of Music.

Speaking of iconic Julie Andrews musicals, the story behind My Fair Lady is arguably as interesting as the stuff that plays out on screen. Andrews originated the part of Eliza on stage alongside Harrison and Holloway, but wasn’t asked to reprise her role for the movie version. The studio wanted a big female star for their expensive adaptation, and Andrews hadn’t even made a single movie yet. Of course, Andrews’ first film turned out to be 1964’s Mary Poppins, which netted her an Oscar. Meanwhile, most of Hepburn’s singing vocals wound up being dubbed and she wasn’t even nominated for Best Actress the same year Andrews captured the prize.

To be fair, Hepburn — the daughter of a European noble, and cinematic royalty in her own right — is *so* wrong for the role of Eliza Doolittle, that it ends up being kinda right. Detractors complained the character’s transformation into something that Hepburn already was (a refined lady) wouldn’t be believable, but the actress threw herself into Eliza’s shrill antics. Her transformation — including a comically robotic trial run during the Ascot Racecourse scene — is satisfying. (The actress’s most luminous moment comes during Eliza’s “I Could Have Danced All Night” awakening.)

Hepburn also has the requisite stature to hold up under Harrison’s witheringly ferocious work as Higgins. A good chunk of the movie’s screen time is comprised of Higgins’ misogynistic taunts, but it eventually becomes apparent that the character doesn’t hate women or the lower class…he seems to have equal disdain for all manner of fraudulent people. (There’s an amusing scene where Higgins reacts giddily to Alfred’s straightforward immorality.) I wouldn’t say Hepburn and Harrison ignite romantic sparks, but they do forge a fiery connection that helps sell the film’s unconventionally “loverly” ending.

My Fair Lady: 50th Anniversary Edition is presented in an aspect ratio of 2.20:1. (As opposed to the 2.40:1 aspect ratio of the film’s previous 2011 Blu-ray release.) The aspect ratio isn’t the only thing that’s changed from that older Blu-ray release; simply put, this is the best My Fair Lady has ever looked. (The restoration team’s efforts are rightfully recognized in the film’s end credits.) The image is both very much of its time (with wonderful grain and texture, starting with the opening flower collage) but also thoroughly modern in its technical superiority. Detail in panaromic, medium, and close-up shots is exquisite, allowing us to see the painstaking work that went into creating the incredible (and Oscar-winning) production design.

The colors from Beaton’s (also Oscar-winning) costumes pop wonderfully, but we are also treated to resplendent whites and inky black levels during the Ascot Racecourse sequence. Speaking of black levels, the movie makes a strong impression right off the bat during the opening Covent Garden sequence, which offers tremendous separation and shadow detail.

Not only has the film’s original soundtrack been remastered, it has once again been gifted an all-encompassing surround presentation. (Courtesy of the disc’s Dolby TrueHD 7.1 track.) The result makes it sound like you’ve got posh orchestra seats during the movie’s opening overture. This is a crisp, consuming presentation that never feels like it’s pushing things too far. The rear speakers expertly support Andre Previn’s (Oscar-winning) score adaptation. But when the music quiets down, we are treated to subtle, effective bits of immersion courtesy of rain and crowd noises. Even the subs are heard from as a horses gallop past the characters at the Ascot Racecourse.

All of the iconic songs (“I Could Have Danced All Night”, “The Rain in Spain”) and even Harrison’s talk-singing (the actor refused to lip-synch, so he wore one of the first wireless microphones every developed) sound clearer and more rousing than ever. Most importantly, this is a thoroughly clean and detailed sonic presentation that doesn’t show it’s age.

The treasure trove of bonus material is available on Disc 2.

The following special features have been ported over from the 2011 Blu-ray release.

More Loverly Than Ever — The Making of My Fair Lady Then & Now: (57:58) This documentary is hosted by actor Jeremy Brett (who played Eliza suitor Freddy) and appears to be about 20 years old. That being said, it’s an interesting and comprehensive look at My Fair Lady that covers everything from the project’s origins to the film’s restoration. (We also learn about the discovery of behind the scenes footage/audio tracks.) Presented in HD.

1963 Production Kick-Off Dinner: (23:20) After a silent couple of minutes, we are treated to black and white footage of the movie’s cast and crew at the dawn of production. Hepburn and Harrison give interviews, while studio head Jack Warner delivers a speech. Presented in HD.

Los Angeles Premiere — 10/28/1964: (4:53) Black and white footage of the movie’s star-studded Hollywood premiere, which was attended by the likes of Steve McQueen, Angie Dickinson, Rock Hudson, and more. Presented in standard definition.

George Cukor Directs Baroness Bina Rothchild: (2:39) On this audio track, Cukor can be heard coaxing a better performance out of the real-life baroness (who plays the Queen of Transylvania in the film) by telling her to repeat the same line “with a smile” or “with authority.” Presented in standard definition.

Alternate Audrey Hepburn Vocals: Most of Hepburn’s vocals were famously dubbed by Marni Nixon, but you can hear the icon’s take on “Show Me” (2:48) and “Wouldn’t It Be Loverly” (4:32). I’m not saying Hepburn had the goods to be a musical superstar, but I don’t mind her unpolished vocals. I actually think they fit the character pretty well. Presented in HD.

Comments on a Lady: Andrew Lloyd Webber (1:04) offers a quick tribute to Alan Jay Lerner, who wrote the screenplay for the film and the book for the musical (and who was set to collaborate with Webber on “Phantom of the Opera”), while Martin Scorsese (1:19) gives a quick plug to The Film Foundation and their work restoring older movies. Presented in standard definition.

Rex Harrison Golden Globe Acceptance Speech: (0:47) A quick, behind-the-scenes look at the actor, who was in Europe at the time of the ceremony, pre-taping his acceptance speech. Presented in HD.

Academy Awards Ceremony Highlights — 4/5/1965: (2:09) We see clips of Cukor accepting the Best Director prize, Warner grabbing Best Picture, and (best of all) Harrison being presented his Best Actor trophy by co-star Hepburn. In all, My Fair Lady won 8 Oscars. Presented in standard definition.

The following bonus material is new to the 50th Anniversary Edition. (With a few minor exceptions.)

British Premiere: (2:17) Unlike the L.A. premiere, this one is in pretty sharp-looking color, although the star wattage is considerably dimmer. Presented in HD.

Rex Harrison Radio Interview: (1:06) If you look at the length of this clip, the word “interview” feels a bit generous. This is brief audio track of Harrison plugging the “electric” production and praising Hepburn as a “great worker.” Presented in HD.

Theatrical Featurettes: The Story of a Lady (5:05) describes the genesis of the production, including Jack Warner paying a then-unprecedented $5 million for the movie rights. (A narrator humbly refers to the transaction as “the most important motion picture purchase of modern times.”) Design for a Lady (8:22) features some great footage of Beaton (who designed for both the movie and stage show) among his work. The Fairest Fair Lady (9:31) appeared in the 2011 Blu-ray release. It covers the casting process, along with some of the material mentioned in “The Story of a Lady.” Presented in HD.

Rex Harrison BFI Honor: (2:08) Harrison can be seen on the elaborate Higgins’ study set reminiscing eloquently about his career. Presented in HD.

This three-disc 50th Anniversary Edition is a marvel. The Blu-ray feature film is presented on Disc 1, all of the bonus material is on Disc 2, and a DVD version of the movie is on Disc 3. The discs are housed in a slick-looking, magnetic Neo-case that I’m honestly still getting accustomed to.

Math is not my strong suit, which is part of the reason I write for a living. But even I know that 2015 is a tad late for a 50th anniversary edition to a movie that came out in 1964. This release was originally slated for last year, and fans had to endure several delays.

I assure you the wait was worth it. The special features — minus the commentary track missing from the 2011 release — are more than hearty enough to satisfy fanatics. More importantly, My Fair Lady has never looked or sounded better…and it’s not particularly close.