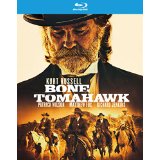 The Blu-ray cover for Bone Tomahawk features a grizzled Kurt Russell donning a cowboy hat. That image immediately indicated to me that I would be in steady, exceedingly capable hands for the forthcoming Western adventure. What I didn’t necessarily expect was for Bone Tomahawk to also deliver one of the more frightening, engrossing, and pulse-pounding movie-watching experiences of the year.

The film’s cold open actually takes place in the blazing sun and sets the tone for the brutality that will eventually follow. Two marauders (Sid Haig and David Arquette) in the 1890s are finishing up their latest assault, which includes some graphic throat-cutting. Unfortunately for them, they wander into some sort of bone-covered sacred burial ground…and only one of them makes it out alive. The spooked survivor makes his way to the town of Bright Hope. The citizens there include Arthur O’Dwyer (Patrick Wilson), an ailing cowboy with a busted leg being tended to by resourceful, no-nonsense wife Samantha (Lili Simmons). There’s also John Brooder (Matthew Fox), the suave local womanizer who is also a trigger-happy gunfighter.

Sheriff Franklin Hunt (Russell) and his bumbling “backup deputy” Chicory (Richard Jenkins) eventually confront the surviving marauder, resulting in an injury that requires the town doctor. Samantha steps in for the drunk doctor at just about the same time the mysterious attackers from the burial ground descend on Bright Hope. Their visit results in a dead body, along with Samantha and a few others vanishing from town. The remaining citizens learn that the likely culprits were a group of inbred, cannibalistic Indians dubbed “troglodytes.” Sheriff Hunt organizes a rescue party to find the missing citizens. He is accompanied by Chicory, Mr. Brooder, and the hobbled Arthur.

Even though the big, bold headlines related to Bone Tomahawk center around the terms “cannibal Western horror” — and I promise we’ll get to that stuff soon enough — a surprisingly large chunk of the movie is spent on developing these characters, particularly the flawed foursome as they embark on what seems to be a suicide mission. (For all they know, Samantha and the others are already dead.) To be fair, some people will undoubtedly feel a little too much of the film’s 132-minute running time is devoted to these quieter scenes. But I found these character beats — Arthur wrestles with guilt over Samantha’s predicament; Sheriff Hunt is subtly protective of the older Chicory at nearly every turn; there’s a reason Mr. Brooder keeps count of how many Indians he’s killed — totally refreshing, especially in a genre where the people on screen are usually little more than dead meat.

Then again, the leisurely pace and well-drawn characters probably shouldn’t be a surprise considering Bone Tomahawk is the feature directorial debut of author S. Craig Zahler, who has written well-regarded Western novels with badass titles like “A Congregation of Jackals” and “Mean Business on North Ganson Street.” The result is some snappy, tough-guy dialogue — “You’ve been squirtin’ lemon juice in my eye since I came in here” — but Zahler also distinguishes himself as a visual director.

Zahler, who has a couple of cinematography credits to his name prior to Bone Tomahawk, stages many of the heart-stopping troglodyte attacks as if the baddies are popping out of some dark crevice in a haunted house. It’s an especially disconcerting effect when you consider most of these attacks are taking place on a wide-open landscape. The action doesn’t properly kick in until the latter half of the film, but it includes at least one of the more unsettling kills in recent memory. (Trust me…you’ll know it when you see it.)

The impact is intensified by the fact that Zahler and his cast have made us invest in these characters. Russell has been the picture of unflappable cool since 1981’s Escape From New York, so he proves to be an excellent choice to lead this hunting party/cast. He doesn’t have the showiest role here, but he does have the authority to believably play a guy you would follow into near-certain death. Wilson has to limp around in agonizing pain the entire time, but he also nicely underplays the romantic aspects of his mission. It helps that Simmons makes the self-sufficient Samantha someone worth saving. However, the movie is basically stolen by Fox (great as the vain, condescending straight-shooter) and Jenkins (who has the best one-liners and gives a doddering, endearingly childlike performance as old-man Chicory.)

Bone Tomahawk is more Western than straight-up horror flick. But given that some of the higher-profile releases in the latter genre (tired found-footage flicks, underwhelming sequels or remakes of classic horror films) tend to come and go with a whimper, Bone Tomahawk serves as a brutal, invigorating shot in the forehead arm.

Bone Tomahawk is presented in an aspect ratio of 2.40:1. The 1080p image is arrived at with an AVC MPEG-4 codec at an average of 23 mbps. The aspect ratio here serves the panoramic, frontier landscape very well. Like most Westerns, this one features a high-contrast, slightly washed out image that makes the dry, desolate scenery seem even more unforgiving. The warm candle/lantern-lit interior scenes feature fine detail, though it’s not as crisp as their outdoor counterparts. Black levels are inky and feature plenty of shadow definition, which is especially crucial during the action in the troglodyte caves. Despite the project’s budgetary limitations, this disc offers an impressive, transportive visual presentation.

The DTS-HD Master Audio 5.1 track is, in my opinion, even more effective than the visual qualities on this release. The obvious standout is the inhuman shrieks the troglodytes make, which chillingly rings out throughout the entire sound field. However, there are also subtler pleasures here, like the way gunshots originate in the front speakers and ring out through the rears, which mirrors the way that same sound echoes throughout the flatlands. Zahler also expertly utilizes silence to create dread…and to let the bursts of horror occurring on screen speak for themselves. This is also an immersive presentation that offers subtle, tension-building atmospheric noises during the rescue party’s extended journey. (The group is always on high alert for approaching marauders and troglodytes.) Dialogue is also totally clean in this track.

The Making of Bone Tomahawk: (10:04) The cast has plenty of praise for Zahler’s authentic, elegant writing, and the actors show their gratitude for the fact that they get to play fully-formed characters. Zahler talks about the challenges of handling his feature film debut and how this was truly an indie production.

Deleted Scene: (2:30) This scene — featuring Arthur, Samantha, and Chicory — is nicely-played, but its dreamlike quality doesn’t fit in with the rest of the story. I can see why it was cut.

Fantastic Fest Q&A with the Director and Cast: (34:40) Zahler, Wilson, Fox, Jenkins and a pair of producers answer questions following a screening of Bone Tomahawk. (Zahler offers a brief introduction before the start of the film.) The group covers the 21-day shoot, Zahler reveals he didn’t set out to make a horror film, and the actors mostly seem giddy and disbelieving about the fact that they got to star in a Western. This is the best bonus feature on the disc and definitely worth a watch.

As much as I enjoyed Quentin Tarantino’s The Hateful Eight, it’s not even the best Kurt Russell Western I’ve seen in the past week. Bone Tomahawk is a leaner, more gruesome, genre-blending delight. Zahler has made a classical Western story with a grisly twist. I don’t get the sense that he set out to make a movie that was destined to become a cult favorite…but that’s precisely what he’s done anyway.