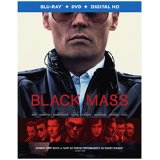 Who’s up for mid-week Mass? You don’t even have to put on your Sunday best…in fact, all you have to do is pop in Black Mass, the star-studded Johnny Depp crime drama from Warner Bros. that highlights this week’s Tuesday Round Up. The studio also mines drama from The 33. RLJ Entertainment engages in Criminal Activities, Sony mingles with Saints & Strangers, and Comedy Central yuks it up with Brian Regan: Live From Radio City Music Hall. Cohen Media Group fraternizes with the three-film Taviani Brothers Collection, Lionsgate races to the Wiener Dog Internationals, and Cinedigm eggs us on with Hatched.

Don’t forget that you still have a couple more chances to win free stuff. Once a month we’re going to give away a surprise DVD title from our archives to a lucky winner who comments in our weekly Round-Up posts. All you have to do is comment in a Round-Up post — like this one! — and tell us which of the featured titles you’re most curious to read about. (Quick reminder: You’re not telling us which title you’d like to win; your free DVD will be a surprise.)