Posted in: Disc Reviews by Archive Authors on February 16th, 2016 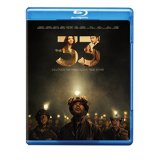 The Martian, which is about an astronaut stranded on Mars, is one of the biggest hit movies of the summer. By the end of the movie, the entire world is united in their hope that the astronaut will be saved. The Martian is not a true story. The 33 is. It is the true story of 33 miners trapped underground for 69 days in a Chilean gold mine in 2010. The world really does come together in their hopes and prayers for the trapped miners. Even though it is a true story, it also functions as a good old-fashioned disaster flick in the tradition of The Poseidon Adventure or The Towering Inferno. It also showcases Latino actors primarily, but some other big-name actors round out the cast as well. The two biggest are probably Academy Award-winning French actress, Juliette Binoche (The English Patient) and Irish actor Gabriel Byrne (The Usual Suspects). Antonio Banderas, Rodrigo Santoro, Lou Diamond Phillips, Jacob Vargas, Bob Gunton, and Oscar Nunez are just a few of the familiar faces known for playing Latin characters (Latino, Hispanic, and Latin are all technically politically correct according to various sources) who anchor this movie. One of the most familiar faces is Cote de Pablo, who was born in Chile but is best known for playing Israeli Mossad officer Ziva Davis in the monumentally successful TV show, NCIS. Kate del Castillo is a hugely popular Mexican actress who also had success in the United States on the Showtime series, Weeds. I could go on, but the point is that this is a product meant to appeal heavily to the Latin American population while still having a broad worldwide recognition factor. It succeeds mostly, but it has a greater responsibility than that. It also has to honor the story of the 33 men who were trapped in that mine.

The film includes footage from Anderson Cooper, Brian Williams, and other international journalists who covered the worldwide, potentially tragic event. It also has the active participation of Don Francisco, the host of Sabado Gigante, which just ended a 53-year run on the air. Don Francisco is a television personality in 185 countries (but is actually Mario Luis Kreutzberger Blumenfeld, the son of Jewish German immigrants who escaped to Chile fleeing the Nazi occupation). Clearly this is a film with international appeal. It is a well-known story the world over when we all held our breath wondering whether the miners would be saved. In case you don’t remember how the story concluded, I won’t spoil it for you here. The film definitely milks the suspense at every opportunity.

The acting is generally very good, but the script and direction are undistinguished. It plods along in a workmanlike fashion with only occasional moments showing any real inspiration. It plays well enough for anyone interested in the story, but not for those expecting something exceptional. It never seems to feel very urgent even though the reality was probably a harrowing experience of unimaginable terror. The reality is they had a gigantic boulder bigger than the Empire State building slowly descending on their location thousands of feet under the surface. The heat was oppressive, and the food and water were ridiculously inadequate.

The 33 is presented in its original aspect ratio of 2.40:1. The 1080p image is arrived at with an AVC MPEG-4 codec at an average 35 mbps This high-definition image presentation is a complete study in contrast of light and color. The desert world is bright and vivid with extremely warm earth tones. Inside the mine there is nothing but blackness, with only the little bit of light from the helmet lanterns to reveal narrow portions of color and definition. Black levels could and should have been better in this dark world. As it is they are pretty much average. Still, there’s enough shadow definition to make out some nice detail. It all serves as atmosphere for the claustrophobic piece.

The DTS-HD Master Audio 5.1 is understandably confined. The surrounds are appropriately reserved. The dialog is completely clear. The subs do a sweet job of enhancing the cave-in footage. The score is also reserved with most of the dominant music coming from source areas. One of the best attributes is how well the dialog and mine sounds give the accurate properties of the mine locations. It all sounds quite like you really are hundreds of yards underground.

The Mine Collapse: (3:54) This brief feature focuses on the reproduction of the cave-in. We watch them as they build fake rock walls and as they release lots of falling rock and debris. The cast and crew talk about working under ground for such long hours.

The World Was Watching: (3:05) As if the news clips weren’t enough, the clip-heavy feature lets us know that the world was watching these events. It would have been nice to hear from the actual guys on that score, but over half the very short running time is just clips from the film.

Another factor that is frustrating is that the mining company barely seems concerned about the lives involved. The film starts by stating that 12,000 people die each year from mining accidents. Mining operations like this are clearly notoriously incompetent and culpable in their generally lax safety measures. This event was seen by over a billion people worldwide and brought attention to this reckless industry. The issue is certainly deserving of a movie that feels more momentous and substantial. It is serviceable and gets the job done but frankly always looks like it is going to collapse under duress because someone never bothered to check if the supports were rusting through.