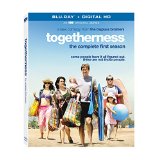 It certainly seems awesome to the four main characters in Togetherness, who are each dealing with their own set of anxieties as they hover around 40. If that previous sentence doesn’t exactly sound like a recipe for laugh-out-loud comedy, then you’re on the same wavelength as this impressive HBO dramedy. Togetherness takes a bittersweet, refreshingly humane approach to portraying marriage and friendship.

The show’s opening scene sets the tragicomic tone for the series. Brett (Mark Duplass) is lying awake in bed early in the morning trying to get some action from groggy wife Michelle (Melanie Lynskey). She curtly rebuffs him, and we’re probably meant to think Brett is the typical horndog husband who doesn’t get enough sex from his frigid/long-suffering wife. But by the end of the first episode/“Family Day”, those expectations have already been upended. It’s just one of many surprisingly generous decisions the show makes towards its flawed characters.

“Of course you can stay…you’re family.”

Our introduction to Brett and Michelle, who also have two young children in the house, turns out to be the start of a pretty eventful day. Brett’s best friend Alex (Steve Zissis), a struggling actor, gets evicted from his apartment and crashes on Brett and Michelle’s couch. Meanwhile, Michelle’s irresponsible older sister Tina (Amanda Peet) is dumped by her louse of a “boyfriend” (guest star Ken Marino). Tina is in town visiting Michelle for a week, but instead of returning home to Houston, she decides to move to California permanently. As a result, she also decides to stay in Brett and Michelle’s house for the time being.

This is another place where Togetherness gently tweaks our expectations: we expect deadbeat Alex and trainwreck Tina to be a burden and cause comical chaos on Brett and Michelle’s suburban life. Instead, Brett practically begs Alex to give him a break from his family, while Michelle finds a much-needed confidant in Tina, who is infinitely better at giving good advice than taking it.

Togetherness is created by Jay and Mark Duplass —who bring their mumblecore filmmaking sensibility to television for the first time — and Zissis, who has appeared in Duplass Bros. movies like Baghead, Cyrus, and Jeff, Who Lives at Home. The relative messiness of their filmmaking style, which is characterized by naturalistic dialogue and performances, fits Togetherness like a glove, since the show explores a disorderly marriage that looks functional on the surface. The only plot thread that struck a false note for me was the romantic connection that develops between Alex and Tina; even though those feelings are (mostly) one-sided, I much preferred the duo as platonic partners.

Of course, the show occasionally runs the risk of veering into “First World Problems” territory.  For example, Alex — who *desperately* needs a job — has a meltdown in Ep. 6/“Ghost in Chains” because the schlubby movie role he is offered doesn’t fit his mission to become a leading a man. Togetherness largely sidesteps this pitfall by finding both the humor and seriousness in certain situations. So Brett and Michelle’s problems in the bedroom result in a hilariously disastrous S&M session in Ep. 2/“Handcuffs” before the couple has a devastating blow up in Ep. 6/“Ghost in Chains.”

The fact that this tight-knit cast is clearly very familiar and comfortable with each other makes their predicaments believable and relatable. Duplass is a great straight man as chronic, overthinker Brett; he doesn’t go fishing for laughs mostly because he understands Brett’s rigidness comes from a real place of insecurity. (He works as a sound designer, and we see him get terrorized at work by an insufferable director played perfectly by Joshua Leonard.) Zissis give us more than the “chubby comic sidekick” shtick by offering a glimpse at the spark that made Alex the big man on campus in high school. Lynskey is fantastic as a housewife/mother who desperately craves spontaneity, but Peet is a brash comic force who exudes confidence but might be the most insecure adult in the bunch. (Nah, it’s probably still Brett.)

Togetherness: The Complete First Season is presented in its original aspect ratio of 1.78:1. The 1080p image is arrived at with an AVC MPEG-4 codec at an average of 36 mbps. The Duplass brothers directed 7 out of the season’s 8 episodes, so it’s no surprise to find they’ve brought their naturalistic visual sensibility to the small screen. While the image is thoroughly modern in its clarity (particularly the epic water droplets during the kick the can climax), there’s also a pleasant, slightly soft dewiness to the image, especially when the show wanders outdoors. (Like when Brett is collecting animal sounds in the second episode) The colors may not jump off the screen, but there’s impressive texture and earthiness throughout, which helps make the world of Togetherness an enjoyable place to spend our time. (Despite each character’s neuroses.)

The DTS-HD Master Audio 5.1 track is dialogue-driven, to be sure, but there’s plenty of life to be found elsewhere. There’s an effective sense of immersion during outdoor sequences (when Brett meets Linda in Ep. 6) and indoor sequences (the movie premiere party Tina and Alex crash in Ep. 3/“Insanity”). We also get subtle bits of directionality when Brett encounters a coyote in the woods, and the subs even make a brief appearance courtesy of the thumping music during the premiere party. The songs that close each episode —include Rush’s “Tom Sawyer” and James Brown’s “The Payback” — also get full run of the sound field.

All of the bonus material is presented in HD. Deleted Scenes and “Inside the Episodes” segments are available on both discs, while “Amanda and Steve” is on Disc 2.

Inside the Episodes: (22:37) Jay and Mark Duplass pop up to discuss the theme of each episode. The brothers are consistently funny and sharp as they discuss their thesis that marriage is equal parts comedy and tragedy. They also talk about basing practically everything that happens on the show on real-life experiences. Not surprisingly (given the show’s title), they conclude that Togetherness is a show about how people are ultimately there for each other.

Deleted Scenes: (7:02) The selection here is pretty meager, but it does include a new intro for Alex in the first episode, a different coda for the combatants in Ep. 5/“Kick the Can”, and a little more Peter Gallagher.

Amanda & Steve: (5:02) Peet and Zissis essentially make a mockery out of every special feature where actors gush over everyone and everything by taking crude (but good-natured) potshots at one another. Not quite as funny as they think it is — they can hardly stop laughing long enough to talk — but a cute idea nonetheless.

Togetherness: The Complete First Season features all 8 episodes on two discs. The finale/“Not So Together” featured a dramatic declaration of love, and Michelle being tempted by the charming, kind single father (guest star John Ortiz) with whom she formed a strong connection. For a show that typically meanders from one medium-stakes plot to the next, that’s a surprising amount of cliffhangers. Season 2 begins Feb. 21, and I’ll definitely be tuning in to see what happens next.