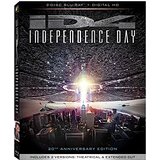 The Fourth of July is still more than a month away, but we don’t feel like waiting that long for the fireworks to start. Thanks to the fine folks at Fox, we’ll be reviewing an out-of-this-world 20th Anniversary Blu-ray Edition of Independence Day. CBS loads up with Have Gun, Will Travel: The Complete Series, lays the law with The Untouchables: The Complete Series, and goes on the hunt with Beauty and the Beast: Season 3. Meanwhile, Paramount laughs it up with The Jim Gaffigan Show: Season 1, and Shout! Factory checks into Newhart: Season 5. Finally, Lionsgate goes searching for Manson’s Lost Girls.