Posted in: Contests by Gino Sassani on October 12th, 2016 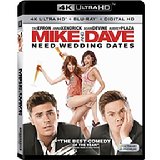 Who wants to party in Hawaii? Fox Home Entertainment and Upcomingdiscs are going to send one lucky winner on a vacation to Hawaii. Okay, we’re not actually going to fly you out to the islands. We’re going to send you a copy of Mike & Dave Need Wedding Dates on UHD (4K) Blu-ray. Zac Efron and Adam Devine will be your hosts. Don’t have a UHD 4K player yet? No problem. There’s a Blu-ray copy included in the package. In ultra high definition it will just be like sending you on vacation… without the airfare/hotel/rental car hassles. This is our first 4K giveaway; let’s make it a big one.

Gino Sassani is a member of the Southeastern Film Critic's Association (SEFCA). He is a film and television critic based in Tampa, Florida. He's also the Senior Editor here at Upcomingdiscs. Gino started reviewing films in the early 1990's as a segment of his local television show Focus. He's an award-winning recording artist for Omega Records. Gino is currently working on his 8th album Merchants & Mercenaries. Gino took over Upcomingdiscs Dec 1, 2008. He works out of a home theater he calls The Reel World. Favorite films: The Godfather, The Godfather Part II, The Body Snatcher (Val Lewton film with Karloff and Lugosi, not the pod people film), Unforgiven, Gladiator, The Lion King, Jaws, Son Of Frankenstein, The Good, The Bad And The Ugly, and Monsters, Inc.
X-men: First Class (UHD Blu-ray) (4K) “31 Nights Of Terror” Penny Dreadful: The Final Season (Blu-ray)