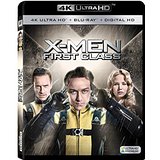 If you are looking for action and adventure, then you will not want to miss X-Men: First Class, a top-notch production that thrills.  The storyline under the able direction of Matthew Vaughn contains all the explosiveness you would expect from a prequel to Marvel Comics’ famous X-Men. It’s the beginning of the saga, and we find Magneto (Michael Fassbender) being haunted by the death of someone close him.  Escaping the clutches of the evil Nazi war criminal Sebastian Shaw (Kevin Bacon), Magneto meets Charles Xavier (James McAvoy).  The two make a pact of finding other mutants and helping them work for justice.  When Shaw rears his ugly head with superpowers of his own, the world puts everything on hold in hopes for a miracle to protect them; enter the X-Men.

I love the screenwriting style of Ashley Miller (Thor) who brings so many dynamic characters to life with amazing superpowers, and in X-Men: First Class she presents some very realistic baddies along with her heroes.  Directed by Matthew Vaughn who gave us the action-laden Layer Cake and Kick Ass, nothing’s held back on his radical style of introducing characters with pugilistic powers. Here he puts Lee’s characters to the test and comes up with a winner.

I would be remiss if I didn’t commend Kevin Bacon on his performance as the sadistic Sebastian Shaw.  Putting all his energy into making the evil Nazi a heinous person makes the film work.  And without his central antagonist being believable as the Joker (Heath Ledger) in The Dark Knight or the Green Goblin (Willem Dafoe) in Spider-man 2, X-Men: First Class would be just another movie.

Vaughn keeps the movie going at a fast clip, developing his mutants as he rushes along.  With so much content one would have thought the film would exceed three hours, but the little over two hours works for him.  When the film ended I wanted more of the powerful heroes and their extreme exploits.  Perhaps we have not seen the end of this saga.

The film is rated PG-13 for brief strong language, some sexuality, and a violent image.  Directly targeted at teens and twenties, X-Men: First Class hits the bull’s eye.

X-Men: First Class is presented in its original aspect ratio of 2.35:1.  The 2160p Ultra high-definition image is arrived at by an HEVC codec. I was hoping for a little bit more out of this 4K release. The colors are a little saturated just as they were in the Blu-ray release. They are not quite as tight. You get some halo and blur issues. The film itself certainly offers some nice images. There is detail here, and the sharpness can’t be denied. The era color-correction actually helps on many scenes by offering a bit better color de-saturation as the film goes on. It’s some of the early sequences that are either over-bright or high in the red ranges. Black levels, however, are excellent, offering wonderful shadow definition along with deep inky blacks.

You get the same DTS-HD MA 5.1 track found on the Blu-ray. I really am disappointed we didn’t get the 7.1 track that has been pretty standard on UHD Blu-rays. By HD standards this is a good audio presentation. Surrounds are not always as aggressive as you might think. The front speakers fully dominate, but they do so with a bit of dynamic sound. There are some very nice sub moments that really give the action a little extra added punch. Dialog is always clear.

Matthew Vaughn might appear to be an odd choice to direct this feature. You might remember that he left production of the third film, and many fans had thought he bailed on the project. Bringing back Bryan Singer was a stroke of genius, but many have questioned Vaughn’s participation. Question no longer. He turns out to have been the perfect director for the project. One now must wonder what the third film might have been like had he stayed. But he didn’t, and the franchise hit a bit of a brick wall after that film. Now the series has branched off into these side projects like Wolverine and now First Class. There is an anticipated Magneto project still out there. It’s Marvel’s largest universe, and the potential is truly staggering. X-Men: First Class has a ton of…well…class.

John Delia has been on all sides of the movie business from publicity, writing for publications and on line blogs, script writing, to film making. Writer, critic, film editor he has worked as a film critic on this second go around for 14 years. He earned his Bachelor’s degree at the college of Journalism and Communications at the University of Florida in Gainesville, Florida. John is an active member of the Southeastern Film Critics Association (SEFCA) . Favorite Films: Lord of the Rings/Hobbit trilogies, The Godfather trilogy, the Indiana Jones trilogy (I didn't like the 4th), The Avengers and for TV it's Game of Thrones. As for animation it's a tie between anything Pixar and everything Hayao Miyazaki.
Tuesday Round Up: October 11, 2016 Contest: Win Mike & Dave Need Wedding Dates From Fox Home Entertainment On UHD (4K)