Posted in: Disc Reviews by Gino Sassani on October 12th, 2016 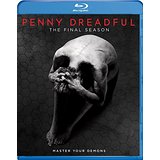 “…And then all light will end, and the world will live in darkness. The very air will be pestilence to mankind. And our brethren, the night creatures, will emerge and feed.”

We could be talking about the end of the world. We could also be talking about the untimely demise of Penny Dreadful with just its third season at Showtime. It came with a suddenness, and not without controversy. John Logan originally planned for the series to go 6-7 years. Something abruptly changed, and he has stated rather forcefully that it is impossible to continue the show beyond this third season. The finale is marked with a solid The End to punctuate his feelings. Showtime did not want to part with the show so quickly. Neither did the fans, and quite frankly neither did I. I haven’t been this disappointed in a creator since Calvin & Hobbes went away because Bill Watterson got tired. Hell, I get tired, too. John Logan might have been finished with Penny Dreadful, but I wasn’t.

I grew up on the horror comics of the 1970’s. Eerie and Creepy were two of my favorites. My father would buy them and pass them down to me when he finished reading them. They were black and white, so that they could take advantage of a loophole in the Comics Code and often featured lurid and gory stories of horror and depravity. Probably not the most appropriate reading for a young boy, but I ate them up. Before those comics there were the EC horror comics from Bill Gaines in the 1950’s. Titles like Tales From The Crypt and The Vault Of Horror called out to readers with gory and hideous covers. But it didn’t really start there. It all goes back to 19th century England and the publication of weekly pamphlets that featured the same kind of ghoulish entertainment for the masses. They were called penny dreadfuls, describing the price and the material they contained. That tradition has evolved over the last century or so, and television has taken the place of that kind of literature. It was only a matter of time before that 19th century tradition would be reborn as a Showtime series called, appropriately enough, Penny Dreadful.

The series has expanded to more than the original three popular horror novels as its foundation. You’ll find characters and situations from Bram Stoker’s Dracula, Mary Shelley’s Frankenstein, and Oscar Wilde’s The Picture Of Dorian Gray. This season finds Victor Frankenstein teaming up with the infamous Dr. Jekyll. John Logan who brought us the thrilling Roman adventure Gladiator takes these basic works of literature and weaves a complicated story that sprinkles in a few other horror elements to bring us something deliciously new. He whips them together in a period piece that is thick with atmosphere. He populates them with incredibly animated characters played by actors that are, for the most part, quite solid in their roles. We know many of these characters from either literature or the various Hollywood incarnations over the years. I’m fortunate enough to be a fan of both the films and the novels. It’s nice to see the two worlds brought so nicely together. There’s also the draw of the lurid comics that sprang from the pamphlets of the day. They sold quite well, although few would admit to reading them. Perhaps that much hasn’t changed in over a century.

If the series has a flaw at all, it can be found in the pacing. There are times that the story moves dreadfully slow and doesn’t always get to a point. Of course, these problems are usually tolerable because of the wonderful performances and terrific atmosphere. The fourth episode of this final season includes only Vanessa reliving her time in a padded cell and her conversations with a kindly attendant. These performances are indeed compelling, and I would have loved that episode if only there had been more time. It only makes me think of what Logan could do if he had allowed this show to go on. This could be as close to a perfect show as I’ve seen if not for the pace issues.

If you want a rundown of the regular characters, you can check out the previous season review Here. I want to tell you about the new characters and relationships that make up this final season.

“The creatures of the night. What music they make.”

This year we finally meet Dracula, who is played quite menacingly by Christian Camargo. He has been an essential character in the background for the previous two seasons. Now he finally takes center stage. If he should win over Vanessa, it would mean the end of civilization. Dracula must also have his Renfield, who is played here by Samuel Barnett. This characterization is absolutely wonderful. There are perfect moments that hearken back to the late great Dwight Frye, yet the performance is all his own. Give Barnett a ton of credit for pulling off a performance that so nicely balances both worlds much as the show has from the start.

Victor Frankenstein finds someone to work with this season in his attempts to “fix” Lily. He finds that companion in Dr. Jekyll, played by Shazad Latif. These are the days before his Mr. Hyde potion. He has developed a serum that can bring insane men back to sanity, but it lasts only a short time. He believes that Victor can perfect the formula and also use it to tame Lily, who is building an army of discarded women.

Sir Malcolm is also teaming up with the Apache “father” of Talbot who has been brought back to face his father. Kaetenay is played by Wes Studi. He is somewhat mystical and wants to team with Sir Malcolm to save Talbot. But Talbot also has a new partner in Hecate Poole, played by Sarah Greene. She is a witch who also has an alternate form. She wants to bring out the pure evil in Talbot. It’s basically a race to see which side wins. For fans who want to see the gathering assembled once again, you’ll get your wish in the final episode as they reunite to stop Dracula from taking Vanessa.

Classic horror fans will find many hidden and not-so-hidden tributes to the Universal and Hammer films. Frankenstein’s lab harks back quite a bit to the production design of James Whale. The local inspector sports a fake arm much as Lionel Atwill’s Inspector Krogh from Son Of Frankenstein and of course spoofed in Mel Brooks’s own Young Frankenstein. The use of violin when the Monster is present could well be an homage to the good hermit in Bride Of Frankenstein.

There’s no question that with such solid performances, wonderful writing, and excellent production design that this is one of the superior cable shows of the day. The only way to see it all is in high definition, and so you’ll want to snatch up this Blu-ray release.

Each episode is presented in its original broadcast aspect ratio of 1.78:1. The 1080p image is arrived at with an AVC MPEG-4 codec. Most of the time this is a solid high-definition image presentation. Colors are mostly muted, and the cold color temperature is almost monochromatic at times. Still there’s a tremendous amount of detail in this sharp image. The production design deserves that attention to detail, because there is a ton of detail to take in here.

The Dolby TrueHD 7.1 is actually quite subtle. The dialog comes through perfectly. The score is actually a highlight of the show and adds immeasurably to the atmosphere. It’s the slight ambient sounds that give the show a hauntingly creepy sensation which is just perfect for the material.

The extras are a huge disappointment. The longest is only seven minutes, and the rest of the Production Logs and Character Profiles are often under two minutes. They make you work for every 90- second chunk, too. I don’t like having to have my remote constantly at hand just to get through 30 minutes of extras. A play-all is absolutely essential to make this worth my time.

I will miss the show and join with the many fans who hope it will return at some point. It is so rare to see any media fully integrate the classic horror films of the Universal era with a modern bit of storytelling. It’s a dream…or nightmare come true for so many of us. It’s something I once believed to be impossible. Now I ask you…”Do you believe the past can return?”

Gino Sassani is a member of the Southeastern Film Critic's Association (SEFCA). He is a film and television critic based in Tampa, Florida. He's also the Senior Editor here at Upcomingdiscs. Gino started reviewing films in the early 1990's as a segment of his local television show Focus. He's an award-winning recording artist for Omega Records. Gino is currently working on his 8th album Merchants & Mercenaries. Gino took over Upcomingdiscs Dec 1, 2008. He works out of a home theater he calls The Reel World. Favorite films: The Godfather, The Godfather Part II, The Body Snatcher (Val Lewton film with Karloff and Lugosi, not the pod people film), Unforgiven, Gladiator, The Lion King, Jaws, Son Of Frankenstein, The Good, The Bad And The Ugly, and Monsters, Inc.
Contest: Win Mike & Dave Need Wedding Dates From Fox Home Entertainment On UHD (4K) “31 Nights Of Terror” Satanic (Blu-ray)