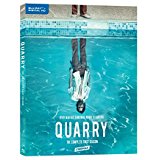 “I’m not as comfortable as you are with the notion of killing other human beings.”

Remember that time about six months ago when NFL star Colin Kaepernick set off a firestorm of controversy by repeatedly kneeling during the national anthem as a form of protest? A big part of the outrage was tied to the notion that Kaepernick’s actions were disrespectful to members of the U.S. military. One of the most striking things about Quarry — Cinemax’s compelling, well-rounded Vietnam War-era drama — is how it depicts a period not that long ago in our country’s history when veterans were openly treated with venom and vitriol that went way beyond someone taking a knee.

Quarry is the story of Mac Conway (Logan Marshall-Green), a Marine who returns home to Memphis in 1972 after a second tour in Vietnam, much to the delight of his pretty young wife Joni (Jodi Balfour). Unfortunately, Mac and his buddy Arthur (Jamie Hector) are somewhat infamous back home: the pair were linked to a (fictional) civilian massacre known as “Quang Thang.” Though they were officially cleared of any wrongdoing, Mac and Arthur are greeted by screaming, spitting protestors at the airport. (That sort of response to a veteran returning home seems pretty unthinkable today.) Naturally, Mac and Arthur’s notoriety makes it virtually impossible for them to find gainful employment back home.

“All you gotta do is pull the trigger, something we both know you’re damn good at.”

Enter The Broker (Peter Mullan), a charming and mysterious figure who offers Mac a bag full of cash ($30,000…in 1972 dollars) to be a killer for hire. After consulting with Arthur, Mac reluctantly takes on his first job…and let’s just say it doesn’t go quite as planned. As a result, The Broker is owed a big chunk of cash and Mac is stuck having to working it off while trying to keep his new life as a killer for hire secret.

Quarry is based on a series of novels by Max Allan Collins. The show reminded me of Rectify — the excellent SundanceTV drama about a death row inmate who suddenly returns home to suspicious friends and family — before I even realized the Cinemax series was created by former Rectify writers Graham Gordy and Michael D. Fuller.

Both Quarry and Rectify take a 360-degree approach to the reception their respective protagonists get upon re-entering American society. That means we not only get to see the strain of Mac’s relationship with Joni (who may or may not resent her husband for re-enlisting for that second tour), but we also get small-yet-effective scenes between Mac and his father (Skipp Sudduth), whose new wife all but bans Mac from their home. And while Mac is clearly the protagonist, I was pleased to see the show stuck with Arthur’s family, which includes a wife (Nikki Amuka-Bird) and children who are affected by racial tensions in Memphis. (The specter of Martin Luther King’s assassination still hangs over the city in Quarry; the show also depicts a different massacre half a world away — at the 1972 Munich Olympics — while the Richard Nixon/George McGovern presidential election looms on the horizon.)

Quarry airs on Cinemax, so it wasn’t surprising to see a steamy sex scene in the first 15 minutes of Ep. 1/“You Don’t Miss Your Water.” However, the show is also a good fit at the network because its booming outbursts of violence rival anything on Banshee or Strike Back, while director Greg Yaitanes (who helmed all 8 episodes) occasionally displays the same flair for long takes that Steven Soderbergh brings to The Knick. (The best is a backseat POV car chase in Ep. 2/“Figure Four.”) The all-encompassing approach of Quarry leads to many good things — the music of Memphis (and Otis Redding) are given special attention — but it also bogs down the story from time to time. Subplots like the one involving a detective trying to pin a non-Broker-related murder on Mac feels like at least one plot thread too many. Mac also has repeated water-related visions harkening back to Quang Thang, but they are more annoyingly vague than they are interesting…at least until we get the full story in the season finale (“Nuoc Chay Da Mon”)

That being said, the action in Quarry generally moves at a tense and entertaining pace. This is an overdue breakout role for Logan Marshall-Green, who thus far is most noted for his strong resemblance to Tom Hardy. Quarry should put the “Tom Hardly” jokes to bed because the actor is a totally compelling and relatable mess as Mac. He’s also not asked to carry the show because Quarry really is an ensemble drama disguised as a typical antihero cable drama. (For a second, the show flirts with Dexter territory when Mac tries to convince himself he’d only be killing bad people.) Other standout cast members include Mullan’s oily charm as The Broker, and Damon Herriman’s lethally flamboyant turn as Buddy, a scout for The Broker’s organization. Both actors bring much-needed levity to the show’s grim proceedings without having it seem forced or gimmicky.

Quarry: The Complete First Season features all 8 episodes on three discs. (The first and final episodes are closer to 1 hour, 15 minutes long.) The DVD set features a solid amount of special features, including Commentaries, Deleted Scenes, and “Inside Quarry” segments on each disc. Disc 1 includes a trio of behind-the-scenes featurettes (“About Quarry”, “Music of Memphis”, and “Recreating 1972”) and “Car Chase Picture in Picture”, which examines a standout sequence from the second episode. Disc 3 also features Music Videos, audio “Love Letters” between Mac and Joni, and “Quang Thang Inquiry Scenes.”

There’s no official word on a second season, but I would be surprised if this strong show didn’t come back. Collins has written more than a dozen “Quarry” novels, so the TV showrunners shouldn’t be hurting for material. If you give this show a chance, I suspect your response will be a lot more positive than the one Mac got upon returning home.

Tuesday Round Up: February 21, 2017 Exclusive Interview With Robert Matzen: Author Of Fireball: Carole Lombard and the Mystery of Flight 3