The King of New Orleans 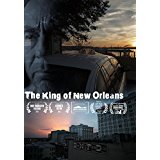 “I don’t know what it is with this place. I don’t want to call it voodoo because that’s so cliché and you guys probably hate that down here…but there’s definitely a feel.”

To say that a certain city is “almost like another character” in a movie has become somewhat commonplace. The phrase is usually applied to films where directors have placed an inordinate emphasis on the background and setting of their stories. By that standard, The King of New Orleans doesn’t simply cast The Big Easy as “almost like another character”…the city gets a starring role.

This ultra-low budget indie is the story of Larry Shirt (David Jensen), a weary but gregarious cab driver in pre-Hurricane Katrina New Orleans. (He keeps beer in his car for customers.) We follow Larry as he shuttles a colorful and electic cast of characters throughout the city. One particular customer seems to catch his eye: Bobby Cohn (Richard Brien) is a clean-cut Harvard student home from school. Bobby reveals to Larry that he is facing expulsion after being arrested for a foolish misunderstanding at school. Larry functions as a sympathetic ear while Bobby faces what is probably the first real crisis in his life. Eventually, Larry has his own problems to deal with, including a health scare and…a certain devastating hurricane that changed the course of the city forever.

And that is pretty much all there is to The King of New Orleans in terms of plot. The directors are Allen Frederic, and Codie & Chike, who collectively bring a gritty, slice-of-life feel to the movie that is reminiscent of early Sundance Film Festival breakout efforts from Jim Jarmusch and Steven Soderbergh. (They also bring some subtle style, including cool split screen shots to liven up the taxi sequences.)

Jensen — a career character actor with almost 100 credits to his name, including several with Soderbergh — gets a rare and deserved starring role here. He carries the movie with ease and is totally believable as a guy who everyone wants to talk to. Larry occasionally confers with a couple of equally weary buddies at a bar (one of whom wants to be a standup comedian), but the actor and the movie shines when Larry is in his cab interacting with the city’s random assortment of characters. Larry’s passengers include a friendly drug-dealing ex-con, an Associated Press reporter writing about post-Katrina New Orleans, and a random weirdo who bets Larry that they will see a certain number of street signs that begin with vowel during one commute.

The idea is that they collectively serve as a representation of New Orleans, and that they are all probably worthy of starring in their own mini movies. The problem (other than the occasional amateurish acting) is that the one passenger the movie does choose to focus on is a dud. The screenwriter here is Brian R. Friedman, who wrote The King of New Orleans in Jackson, Mississippi after evacuating New Orleans in the wake of Hurricane Katrina. The Bobby character is an avatar for Friedman, but the connection with him and Larry never quite pops, which is a problem considering it plays a significant role in the film’s climax. Part of the problem is that Brien gives a stiff and awkward performance compared to Jensen’s effortless and unforced charm.

Although the arrival of Katrina is conveyed through stock footage, the movie’s best sequence still manages to convey the storm’s impact on the city. Larry eventually runs into a pair of out-of-town passengers who gleefully ask him to take them on a tour of the devastation in New Orleans. The more glum Larry sounds as he describes people fleeing their homes, the cheerier the two oblivious tourists get…even asking Larry to take a picture of them in front of what used to be someone’s home.

I wish this DVD had come with any sort of bonus material because I would’ve liked to have heard about the filmmakers’ personal connection to the city and story. (Instead of having to Google it like the nerd I am.) The King of New Orleans is occasionally clumsy — there’s an on-the-nose dig at the city’s marginalization of citizens with mental health issues following Katrina — but is nevertheless a low-key, stylish tribute to a city that loves its colorful sinners and Saints with equal measure.