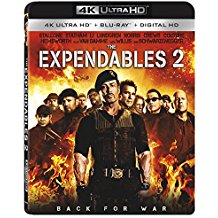 This week’s Round Up stars a group of muscle-bound action movie all-stars like we’ve never seen them before! Lionsgate was kind enough to spare copies of The Expendables and The Expendables 2 in 4K, so be sure to check back soon for our reviews. And speaking of icons of yesteryear, Paramount has taken (dance) steps to ensure that John Travolta’s big screen breakout stays alive thanks to Saturday Night Fever: 40th Anniversary Director’s Cut. (Our longtime friend Michael Durr came out of retirement to review this one.) Time Life goes to war with Bob Hope Salutes the Troops, while Passion River Films gets in touch with its artistic side in Saving Banksy. Finally, CBS/Paramount rolls the dice with Vega$: The Complete Series, while Universal spotlights some four-legged friends with A Dog’s Purpose.

Now it’s time for your weekly reminder before signing off: if you’re shopping for anything on Amazon and you do it through one of our links, it’ll help keep the lights on here at UpcomingDiscs. See ya next week!