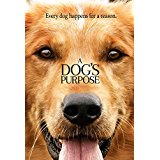 When’s the last time you saw a good dog movie with love, devotion, and heroism?  Not the animated type, but one that stars dogs doing some awesome stunts, creating the love for animals and even inspiration.  Well, you can find all that and more in the movie A Dog’s Purpose, a fun, adventure of a dog’s life that runs full circle.  It’s fun for the whole family, but don’t be surprised when your youngster starts begging for a new furry friend. After escaping from a cage, a starving young pup gets saved by Elizabeth (Juliet Rylance).  Her son Ethan (Bryce Gheisar) wants to keep the dog, and after an intervention with his father, Elizabeth wins out.  Young Ethan names his new-found friend Bailey (narrated by Josh Gad), and they get along famously.  As time goes by, Ethan (KJ Apa), now a popular high school football player, finds his true love with the help of Bailey.

The film goes on from there as Ethan finds himself losing a chance at a college scholarship when he gets hurt in a fire-related accident.  Director Lasse Hallstrom does a very good job of changing from one breed of dog to another, showing all the quirks of the new pup’s personality.  He provides a lot of comedy with the different dogs, touching scenes that warm the heart and some very dramatic situations that lead to heroic deeds.  Mixed in with the passage of time the audience does get exposed to very strong scenes showing abuse, so please be cautioned when taking the immature youngsters to see A Dog’s Purpose.

The acting throughout is a group affair with all doing very credible jobs.  But the real stars of the movie are the dogs that are put through their paces and in some cases show amazing courage and agility. From Bailey to Buddy, the circle of life continues to the very end, giving the audience an insight in the suggestion of reincarnation. Do the souls, spirit, and continued awareness of their lives really happen in a newborn dog when one dog dies? It’s an age old question and one that surfaces in A Dog’s Purpose.

A Dog’s Purpose has been rated PG by the MPAA for thematic elements and some peril.  The peril involves a red retriever, Bailey, who gets caught up in a fire and afterward as a police officer’s trained German Shepherd named Ellie.

A Dog’s Purpose is presented in its original aspect ratio of 2.40:1. The 1080p image is arrived at with an AVC MPEG-4 codec at an average 35 mbps. This is a very bright and often cheerful high-definition image presentation. The close-up work on the dogs combines well with the narration to create quite an emotional experience. Colors pop and are quite vivid. Black levels might be just average, but there’s not much about this film that plays out in the dark. The exteriors give us wonderful greens and blue skies. Many of the shots are taken from a dog’s point of view, so there’s some blur and issues that play right along with the film’s theme.

The DTS-HD Master Audio 5.1 is really there to serve the dialog and narration. The sound is not aggressive; in fact it’s rather close and intimate. You are drawn directly into this dog’s story, and anything else here would just be a distraction.

Deleted Scenes: (9:24) Deleted scenes are just so much better with dogs. There are 15 with a handy play-all. Most of these are really extended versions of scenes already in the film.

Outtakes: (2:11) Outtakes are just so much better when there are dogs.

Lights, Camera Woof: (8:46) Behind-the-scenes features are a whole lot better when there are dogs. This one is a bit more clever than most and narrated by Roxie, one of the dog’s in the film. Don’t worry. There’s plenty of production footage, and cast and crew get in their thoughts. And there’s a lot of dogs.

A Writer’s Perspective: (4:44) Truth be told, pretty much any kind of feature is better with dogs. Here the writer tells us about creating the book that the film is based upon.

A sweet movie that shows the importance of “man’s best friend”.

John Delia has been on all sides of the movie business from publicity, writing for publications and on line blogs, script writing, to film making. Writer, critic, film editor he has worked as a film critic on this second go around for 14 years. He earned his Bachelor’s degree at the college of Journalism and Communications at the University of Florida in Gainesville, Florida. John is an active member of the Southeastern Film Critics Association (SEFCA) . Favorite Films: Lord of the Rings/Hobbit trilogies, The Godfather trilogy, the Indiana Jones trilogy (I didn't like the 4th), The Avengers and for TV it's Game of Thrones. As for animation it's a tie between anything Pixar and everything Hayao Miyazaki.
Tuesday Round Up: May 2, 2017 The Expendables (UHD Blu-ray) (4K)