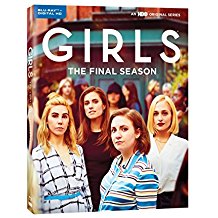 These self-aware words are spoken by Hannah Horvath, the on-screen alter ego of Girls star/creator Lena Dunham during the premiere of the show’s final season. Of course, anyone who’s watched Girls knows the “witty yet narcissistic” label applies to practically every character in Dunham’s often flawed (and even-more-often brilliant) HBO dramedy. So while this final batch of episodes includes some superb moments, it’s not a total surprise that this polarizing series concludes its run with a frustrating finale that is more satisfying for the show’s creators than it is for its fans.

“It can be pretty hard to have observations about other people when you’re only thinking about yourself.”

Hannah (Dunham) actually begins this final season in a good place professionally. She is still getting kudos and attention for the piece she wrote about the fact that her best friend Jessa (Jemima Kirke) and her ex-boyfriend Adam (Adam Driver) began a relationship shortly after Hannah and Adam broke up. Naturally, Hannah’s professional bliss doesn’t last very long: she is given an assignment in the Hamptons that requires her to learn how to surf. The good news is she meets a handsome and laid-back instructor (played by Emmy nominated guest star Riz Ahmed) who says things like, “Hate takes energy. Love gives vibes.”

Elsewhere, Marnie (Allison Williams) remains separated from her trainwreck of a husband Desi (Ebon-Moss Bachrach) while simultaneously sleepwalking through her current relationship with misanthropic Ray (Alex Karpovsky). So it’s not exactly a shocker when Marnie finds herself drawn to Desi’s crazy orbit again. Shoshanna (Zosia Mamet) continues to pursue her career ambitions, which further isolates Shosh from her chronically immature circle of friends. And Elijah (Andrew Rannells) is still stuck in a personal and professional rut after celebrity ex-boyfriend Dill (guest star Corey Stoll) gently crushed his heart last season by telling him they couldn’t be in a relationship because Elijah is not a serious person. Still, this final season of Girls reserves its biggest bombshell for the end of Ep. 4/“Painful Evacuation,” when Hannah receives some life-altering news.

That bombshell installment comes immediately after the season’s high point (Ep. 3/“American Bitch”), a bottle episode/duet between Hannah and a successful novelist played by The Americans star Matthew Rhys that explores the power dynamics between older/successful men and young/impressionable women. The subject is obviously near and dear to Dunham — along with co-executive producers Jenni Konner and Judd Apatow — and the episode serves as an unofficial companion to “One Man’s Trash,” the season 2 bottle episode featuring guest star Patrick Wilson.

Obviously, the fact that I felt this 10-episode final season peaked with Ep. 3 isn’t exactly ideal. And even though the self-serving series finale was a letdown, the show does make some crowd-pleasing overtures to its fans. That includes final appearances/returns from impactful guest stars like Wilson, Stoll, Gaby Hoffmann (as Adam’ even more unstable sister), and others. The best example, however, might be the fact that Elijah, a longtime Girls scene-stealer, is finally heavily featured in an episode (Ep. 7/“The Bounce”) that allows “Book of Mormon” star Rannells to use the full range of his talents. Heck, if you want to talk about wish-fulfillment, Ep. 8/“What Will We Do This Time About Adam” offers fans a glimpse of what an Adam/Hannah happy ending might look like. (This season is otherwise a waste of Driver’s talents, which is a shame since his electric work on Girls is what launched him onto a galaxy far, far away.)

In this Blu-ray set’s special features, Dunham and her co-producers reveal they made the conscious decision to have the penultimate episode of the series (Ep. 9/“Goodbye Tour”) feel more like the show’s finale, and it absolutely delivers on that front. Turns out that just because four women were friends with each other five years ago, it doesn’t mean they are guaranteed to remain friends — or even friendly — in perpetuity. (One of the show’s better low-key gags is the fact that Shoshanna, the youngest and arguably most grating Girl, turned out to be one who most closely resembles a grown-up.)

While “Goodbye Tour” nicely ends with our four main Girls fractured but in the same physical space, the show’s actual finale “Latching” finds Hannah trying to start a new life with the help of Marnie, who runs away with the title of “Most Outwardly Awful Girl.” (In addition to chronically overusing the word “literally”, Marnie manages to make Desi’s mental and physical issues all about her.) Ending the series this way was a left-field, but ultimately disappointing choice; in trying to avoid a “typical series finale,” the creators got too cute and excluded too many people who were too important to the show’s success from its final moments. (A partial list of people who do not appear in the series finale: Jessa, Shoshanna, Adam, Elijah, Ray.)

Girls: The Final Season is presented in its original aspect ratio of 1.78:1. The 1080p image is arrived at with an AVC MPEG-4 codec at an average of 30 mbps. Yes, the bulk of the action still takes place in and around urban NYC, but Hannah’s season premiere writing assignment in the Hamptons gives us a sunnier, beachier, and even more vibrant palette than we’re used to. (This includes the hot pink wet suit Hannah inadvertently borrows.) The show’s visual style always married indie film sensibilities with a grungily romantic attitude toward New York. And once again, HBO’s Blu-ray release for this series provides a blemish-free, exquisitely-detailed, and surprisingly warm visual experience throughout the entire season.

The DTS-HD Master Audio 5.1 track is, to the very end, wholly and subtly immersive without detracting from the main, dialogue-driven action. There continues to be a very clean and defined separation, with the dialogue sticking to the front and the wide variety of atmospheric city noises occupying the rear speakers. The show’s blasts of hip-hop and indie rock feel properly explosive and fill the entire sound field, particularly during the impromptu rap performance by Riz Ahmed’s Paul-Louis. The show’s beachy season premiere also gives us some crashing waves in the rear speakers. Still, dialogue has always been king here…and it comes through intelligibly and flawlessly as always.

All of the bonus material is presented in HD. The “Inside the Episodes” segments are available on both discs with their corresponding episodes. The “Girls Favorite Moments” highlights for Shoshanna and Jessa are available on Disc 1, while the rest of the bonus features can be found on Disc 2.

Inside the Episodes: (38:18) HBO offers these weekly behind-the-scenes featurettes for many of its shows, and these feature creator/star Lena Dunham, and executive producers Jenni Konner and Judd Apatow dishing on each episode. The highlights here include the discussion surrounding Ep. 3/“American Bitch” (Dunham wanted to bring the power dynamics between powerful male writers and impressionable young women out of the shadows), while Apatow promises at the end of the final segment that this trio will work together again soon.

Girls Favorite Moments: Some selected scenes highlighting the best moments in the series featuring Shoshanna (18:36), Jessa (15:36), Hannah (12:01), and Marnie (11:47). Honestly, I was underwhelmed by the rote way these scenes were presented: there’s no creative editing or inspiring soundtrack choices to tie them together like we’ve seen for montages on past Blu-ray sets. Instead, this is just a series of random scenes shown one right after the other.

A Goodbye to Girls: This farewell featurette is (unnecessarily) split into two parts. Part 1 (20:13) is more of a general overview with comments from cast and crew. Dunham is proud of portraying complex young female characters in their “messy, inappropriate” glory. There’s also some fun footage of screen tests with the main players. Part 2 (14:56) includes a tribute to the show’s eclectic roster of guest stars along with a look at the show’s fashion.

Audio Commentary: There’s only one commentary track here, and it features Dunham, Konner, and Apatow breaking down the series finale. In addition to pointing out callbacks to past season premieres — the episode opens with Hannah spooning in bed with one of her friends — Konner accurately describes this finale as “the weirdest spinoff that would never happen.”

Girls: The Final Season features all 10 episodes on two discs.

Despite ending with somewhat of a whimper, Girls (which premiered in 2012) deserves credit for bringing such a frank, funny, and honestly f—ed up group of characters to the small-screen before the explosion of original content from Netflix, Amazon, and other outlets gave us an infinitely greater number of imperfect TV protagonists.

While it may not have been Dunham’s official mission statement for the show, Hannah does state in the final season that, “I want to make people laugh about the things in life that are painful. That’s what I want to do.”

Tuesday Round Up: August 1, 2017 Psychoanalysis