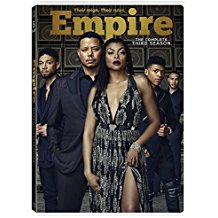 “You love this type of drama.”

When Fox’s Empire premiered in early 2015, it became an instant sensation that re-wrote the ratings record books. The show’s mix of high drama and hip-hop obviously struck a chord with an underserved segment of TV viewers. Of course, that sort of otherworldly buzz and ratings success was never going to be sustainable. So while Empire has inevitably lost some of the sizzle from its unprecedented debut, this unapologetically over-the-top soap rap-era continues to entertain by leaning into its Twitter-shattering craziness.

“What’s a king without a queen?”

Empire is essentially a modernized, hip-hop riff on “King Lear” that takes its episode titles from various Shakespearean lines. Season 2 concluded with the surprise wedding of drug dealer-turned-music mogul Lucious Lyon (Terrence Howard) and former fiancee-turned-adversary Anika Calhoun (Grace Byers) so that Anika couldn’t be compelled to testify against Lucious. The investigation on Lucious is led by dogged FBI agent Tariq Cousins (Morocco Omari), who happens to be Lucious’ half-brother with an axe to grind. The opening minutes of season 3 resolve the almost literal cliffhanger of whether Anika or Rhonda Lyon (Kaitlin Doubleday) plummeted to her death after a high-rise scuffle.

“Ain’t nobody as messed up as the Lyon Bros.”

Turns out the unlucky lady was Rhonda, the wife of bipolar Andre Lyon (Trai Byers), Lucious’ oldest son. (Rhonda’s death literally haunts Andre; let’s just say the character’s death doesn’t prevent Doubleday from appearing in subsequent episodes.) Middle son Jamal (Jussie Smollet) is suffering from a bout of PTSD after taking a bullet that was meant for his father. Meanwhile, youngest son Hakeem (Bryshere Y. Gray) is dealing with the fact that his baby mama (Anika) is married to his father, who insisted on keeping Hakeem’s name off the baby’s birth certificate. And of course, there’s no way we can forget Cookie Lyon (Taraji P. Henson), Lucious’s ex-wife and his current co-CEO at Empire, the massively successful music and entertainment company they founded. While Lucious is fixated on the success of Empire Xstream — the company’s streaming service — Cookie begins a romance with Angelo Dubois (Taye Diggs), a well-to-do city councilman with ambitions on becoming mayor of New York City.

More than any run of episodes up to this point, season 3 of Empire delves into the similarities and differences between different types of black experiences. The crassness of Cookie and her family rubs Angelo’s mother (The Cosby Show‘s great Phylicia Rashad, who Cookie hilariously refers to as a “fake-ass Claire Huxtable”) the wrong way. And while Lucious works to maintain a sophisticated veneer, season 3 gives a lot of screen time to Shine Johnson (Xzibit), a music industry player who doesn’t care to hide his gangster tendencies. Overall, the show is more effective when Lucious laments that his spoiled sons have lost touch with their roots — especially since he’s the one who spoiled them! — than when it gives us an on-the-nose subplot involving Andre and a nasty run-in with the police.

The inherent loopiness of Empire can make for an awkward fit when the show tries to get too serious, but I’m glad that such a high-profile show doesn’t shy away from potentially uncomfortable topics. Season 3 — like season 2 before it —contains 18 episodes, which is 50 percent longer than the 12 episodes in the show’s initial blockbuster run. I can appreciate that Fox has a primetime schedule to fill, but 18 episodes of Empire‘s rollercoaster insanity still feels like too much. That being said, I feel the series — which is co-created by Lee Daniels and Danny Strong — did a better job of parceling out the drama during season 3.

It helps to have strong performers across the board. Henson is undoubtedly the show’s breakout star, and she continues to deliver crowd-pleasing, sensational work that manages to feel authentic even as Cookie swans into a room to smack someone upside their head. She has terrific chemistry with Hustle & Flow co-star Howard, a dapper and dangerous devil. Season 3 gives us a lot of flashbacks that show the origin of their characters’ love-hate relationship as Jamal works on an album called “When Cookie Met Lucious.” (The music on the show continues to be a strength, even though nothing in season 3 catches on the way “Drip Drop” or “You’re So Beautiful” did during season 1.) Cookie and Lucious have a present-day, knockdown brawl at the end of Ep. 10/“Sound and Fury,” but despite all the horrible things the family does to one-another, the common theme is that the Lyons are strongest when they work together. Speaking of the Lyons, this is a breakout season for Byers as Andre, who plots Empire’s entry into Las Vegas as a way of supplanting his father atop the company.

While season 2 saw an explosion of stunt casting after the show became a phenomenon, season 3 scaled things back considerably. However, we still get appearances from Mariah Carey, Snoop Dogg, Rumer Willis, Nia Long, and Eva Longoria. We also get the usual roster of recurring characters, including Andre Royo’s delightfully shady work as Lyons family attorney Thirsty Rawlings, who orchestrates a “Bro-crean’s Eleven”-style Vegas heist in the two-part finale/“Toil and Trouble.”

Empire: The Complete Third Season features all 18 episodes on five discs. Special features include “Uncut Musical Performances” on Disc 2 (“Starlight” by Tiana, “Heart of Stone” by Nessa) and Disc 4 (“Elevated” by Hakeem). There are also “Studio Sessions” featurettes for the songs “Need Freedom,” “Clap Back,” “Me,” and “Good People” featuring input from cast members Smollet, Gray, and Seraya along with snippets of them recording their vocals in the studio.

Season 3 continued to embrace the show’s soap-y tendencies with a (literally) explosive finale that included someone being framed for murder and an important character suffering from a bout of amnesia. The show’s fourth season is already underway, and I’m sure Empire will find plenty of ways to manufacture fresh drama.