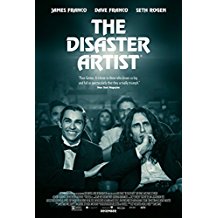 “Wish we could just make our own movie.”

I have more than 800 reviews to my name on this site, and I’ve probably watched several thousand movies overall throughout the course of my life. A lot of them are bad. Some are even worse than The Room, which has been dubbed “the Citizen Kane of bad movies.” However, I’ve never seen a movie that is bad in the way The Room is bad. It seems a substantial chunk of Hollywood — led by star/filmmaker James Franco — feels the same way. The creation of The Room is chronicled in The Disaster Artist, but there’s more here than just an anatomy of a trainwreck. The film also works as an ode to underdog Hollywood dreamers who take a DIY approach to (accidental) stardom.

“But the real question: are you serious?”

Before diving into The Disaster Artist, it’s probably helpful to know a little something about The Room, a little-seen 2003 “black comedy” written and directed by Tommy Wiseau, who also financed the $5 million(!) film himself and starred as Johnny. I promise you the quotation marks around “black comedy” cannot be strong enough.

“…and also, maybe Johnny is vampire.”

The Room — a melodrama about a well-meaning guy who is betrayed by his fiancee future wife and best friend — is funny only because of how comprehensively inept it is. The movie’s singular awfulness goes beyond the sort of bad acting and cheap-o production values that made films like Ed Wood’s Plan 9 from Outer Space schlock classics, but it can effectively be boiled down to Wiseau. The mysteriously ageless auteur looks and sounds like a vampire with a speech impediment. Simply put, there’s never been anyone else like him on a movie screen.

“Los Angeles…everybody want to be a star.”

The Disaster Artist is based on the great 2013 book of the same name by Greg Sestero and Tom Bissell. Sestero played Wiseau’s best friend in The Room…and in real life, for a while. Wiseau (James Franco, who also directs) and Sestero (Dave Franco) meet in an acting class during the late ’90s. Sestero, a handsome young aspiring actor who is unsure of himself, is so captivated by Wiseau’s fearlessness on stage that he overlooks the fact that Wiseau is also a terrible actor. The two form a bond, despite Wiseau’s severe reluctance to talk about his background or personal life. (He claims to be from Louisiana.) Wiseau invites Sestero to live with him in Los Angeles and pursue acting careers.

Needless to say, Wiseau is no one’s idea of a movie star. So after several false starts, the pair decide to take matters into their own hands. With Sestero’s support, Wiseau bangs out the script for The Room and offers Sestero a co-leading role. Wiseau mysteriously raises millions of dollars to produce the film and insists on directing it himself, despite the fact that he has absolutely no idea what he’s doing. The second half of The Disaster Artist shows us the chaotic production of The Room as Wiseau becomes increasingly unstable.

I have a strong suspicion that Franco and screenwriters Scott Neustadter and Michael H. Weber are as obsessed with The Room as I am. (I bought a DVD copy off Amazon in 2009 after reading an article about this peculiar movie.) In addition to re-staging many of the cult classic’s more memorable (and meme-able) moments, The Disaster Aritst features Easter eggs (there’s an Ojai sign atop the building where Tommy and Greg live) and some fantastic side-by-side comparisons of footage from the real Room and spot-on re-creations with Franco’s cast. (The latter has me convinced that Franco re-made the entirety of The Room with his actors.)

At first, I felt like Franco’s work as Wiseau had a slightly detached quality to it, as if to let us know he was in on the joke. But as the film progressed, Franco’s cagey performance went beyond doing an impression — although he absolutely nails Wiseau’s signature chuckle — and became more immersive and heartfelt. He somehow makes the abhorrent, ridiculous Tommy into a sympathetic figure. Meanwhile, the younger Franco makes for a solid straight man/foil for Wiseau, even if he’s not quite strapping or charismatic enough to justify the strong feelings Wiseau develops for him. In fact, most of the straight man work is done by Seth Rogen as Sandy Schklair, the script supervisor who actually *wants* credit for directing The Room. As Schklair points out the many logical inconsistencies in The Room, Rogen serves as an stand-in for the confused audience.

But that’s just the tip of the iceberg in terms of the star power on display in The Disaster Artist. Without spoiling what they do, the supporting cast is filled with current comedy cool kids (Hannibal Burress, Alison Brie, Jason Mantzoukas, Jerrod Carmichael) and eclectic cameos from the likes of Sharon Stone, Bob Odenkirk, Melanie Griffith, and Judd Apatow, who probably gives the best guest star performance. As a Room obsessive, I also thoroughly enjoyed the actors hired to play the performers/characters from The Room: Zac Efron shows up throwing flames as hot-head Chris-R, Josh Hutcherson wears the most unfortunate wig in recent movie history as weirdo neighbor Denny, and Ari Graynor is probably the most sympathetic figure in the entire movie as sweet, embattled Room leading actress Juliette Danielle. You should also stay until after the end credits for an extra special cameo.

The biggest risk with The Disaster Artist is that the entire thing could’ve come off as an enormous inside joke. To that end, the movie opens with amusingly earnest testimonials by the likes of Kristen Bell, J.J. Abrams and Adam Scott, who makes the case that The Room has had a longer-lasting impact than movies that have won the Oscar for Best Picture. (I mean, he’s not wrong.) Whatever his intentions might have been at the start, Wiseau succeeded in creating a film that made him a star and connected strongly with audiences. (The preview screening I attended came with Johnny and Chris-R cosplayers.) And withThe Disaster Artist — a terrific movie about the making of one of the worst movies of all time — Franco has succeeded in creating a film that will very likely be an Oscar contender in the next few months. “What a story!”