Posted in: Disc Reviews by Archive Authors on December 8th, 2017 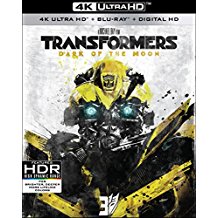 “In any war, there are calms between the storms. There will be days when we lose faith, days when our allies turn against us. But the day will never come, that we forsake this planet and its people.”

Following the events of Transformers: Revenge of the Fallen, the Autobots are working hand-in-mechanical-glove with human authorities (in other words, the apparently all-powerful CIA), keeping close watch for Deception activity, but also helping out in human-on-human conflicts. Meanwhile, Shia LaBeouf has traded in improbably hot girlfriend Megan Fox for the equally improbable Rosie Huntington-Whiteley (an improbability that the script does have some fun with). He is also out of work and dismayed at not being given due consideration as a savior of the planet.

Romantic and job-related misadventures will conspire to keep LaBeouf’s nose out of joint for a good stretch of the film’s running time, but other more (literally) earthshaking events are afoot, as a decades-old secret from the original moon missions emerges, as does the Autobots’ former leader, Sentinel Prime (voiced by Leonard Nimoy, and looking a lot like the man, too). Just as Sentinel’s return seems to presage a new dawn for the Autobots, a complex web of conspiracies and betrayals climaxes in the most devastating Decepticon attack yet.

As for the human characters, they feel more extraneous than ever. While John Malkovich’s shameless slice of ham is entertaining, and Ken Jeong steals the film during his brief comic turn, it is really hard to give two figs for LaBeouf and his concerns. As for Huntington-Whiteley, her initial appearance says it all: nothing but a pair of bare legs walking on tiptoe for maximum walking-in-heels effect. She is nothing more than another aesthetically pleasing object for Bay’s camera, polished and lit to a high sheen. Though her situation is the most egregious, it does rather neatly encapsulate the basic situation: the robot characters are far more interesting, developed, and believable than the humans.

Transformers: Dark Of The Moon  is presented in its original aspect ratio of 2.35:1. The ultra-high-definition 2160p  image is arrived at by an HEVC codec with an average bitrate of 65 mbps. This is one of those films that brings out the best in our Oppo UDP-205 unit. The HDR reproduction pops with vivid colors most often found in the shiny cars and robots. Again there’s so much detail and depth that it is really a new experience from any previous version you might have. Black levels deliver exceptional dark and shadow definition. Contrast again shows the true ability of an HDR release. On Blu-ray and to some extent in the theater there is a lot of blur to the changing mechanics of the robots. This is the first time you can really see and appreciate the transformations that give these characters their name.

The Dolby Atmos presentation defaults to a sweet 7.1 track. This, too, is something of a technological marvel. I have absolutely nothing but unqualified praise for the surround use. The placement of sound cues left, right, front, and rear is impeccable and constant, providing an immersive soundscape that is just as explosive and exciting as the visuals. The score has an appropriately big sound to it, and the dialog is perfectly clear. Where I do have a quibble is with the explosions and gunfire. The technical polish is such that these sound effects sound too clean, their digital origins betrayed by the perfect smoothness of their electronic delivery. The result is that some of the booms and bangs lack oomph. On the whole, though, terrific, engaging sound design.

The extras are all on the Blu-ray copy of the film and are the same from the previous Blu-ray release.

These are the kinds of films that certainly take the greatest advantage of a 4K release. Paramount gets these out just in time for Christmas, and that’s no coincidence, to be sure. It’s like candy for your home theater. Even though the films have lost touch with story in the last film, there are plenty more Transformers coming to this format. “The Autobots are staying right here.”