Posted in: Disc Reviews by Gino Sassani on December 11th, 2017 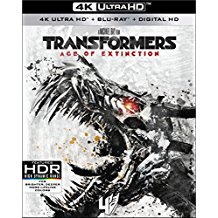 When I was a young boy I loved playing with my toys. We didn’t have Transformers in those days, but we did have Major Matt Mason, plastic dinosaurs, Hot Wheels and Creepy Crawlers Thingmaker sets. Yeah, in those days a toy could cause third-degree burns and no one really worried about getting sued. Kind of takes the fun out of being a kid today. You know who else, I bet, loved to play with his toys? Michael Bay. I bet he had the coolest toys in his neighborhood. He probably wasn’t the best guy to be friends with, however. He didn’t invite the kids over to play with his toys. He likely charged you a nickel to watch him play with them. It’s many decades later, and Michael still has the coolest toys on the block. Only now you have to cough up twenty bucks if you want to watch him playing with them. Sadly, that is what the Transformers film franchise has been reduced to. We’re all watching the rich kid playing with really cool toys.

That’s not to say that Transformers isn’t at all entertaining and maybe, just maybe worth the twenty bucks to check out. It’s an amusement park ride from beginning to end, and when you see how much Disney or Universal are charging for those these days, it might just be a bargain at that. Just as long as you enter the gates with the understanding that Transformers: Age Of Extinction is going to take you on a thrill ride. Nothing less, and certainly nothing more.

Age Of Extinction takes place about five years after the third film. The country is just getting back to normal, and both the Autobots and the Decepticons have gone into hiding. The CIA has created a task force headed by Harold Attinger (Grammer). On the surface he’s hunting down the remaining Decepticons, but he’s allied himself with a third race of Transformers and is hunting down all of the robots. Technology has advanced because of our exposure to the Transformers, and a new metal called Transformium (yeah, try and say that with a straight face) has been discovered in the Arctic. It turns out it wasn’t a meteor that took out the dinosaurs, it was the Transformer creators. They converted the area into the substance. It’s a programmable metal that is the basis for the construction of a Transformer. He’s teamed up with billionaire industrialist Joshua Joyce (Tucci) to create our own army of slave Transformers. Yeah, no spoiler alert here. That’s not going to end well.

On the human front we have Cade Yeager (Wahlberg). He’s basically Billy Bob Thornton in The Astronaut Farmer or Hoyt Axton in Gremlins. He has a barn filled with robotic devices that almost work. He’s reaching for that one grand invention that will put him on top. He has a teenage daughter Tessa Yeager, played by Meghan Fox  Nicola Peltz. She’s basically the adult while Dad goes out and buys tons of junk to work into his projects. Their lives are about to change, however, when Cade brings a busted-down truck he bought of all places at a theater. No spoiler alert needed to tell you that underneath that rusted hulk is the big man himself Optimus Prime, still voiced by Peter Cullen. He awakens just as Attinger’s government agents led by James Savoy (Welliver) come knocking on their door with plenty of high-tech gizmos and weapons. Fortunately, with all of this technology the government guys have crappy aim and can’t even hit broadside of a tractor-trailer to save their souls.

Now father and daughter along with the Irish boyfriend Dad didn’t know about are on the run from the government and some pretty tough alien robots. They manage to figure out what’s going on with the help of Prime (now painted in bright flames to…you know… keep under the radar) and his assembled surviving Autobots. It’s pretty much a worldwide chase, infiltration of high-tech labs and sabotaging of giant starships that fills the incredibly over-long two hours and forty-six minutes of film time.

That film time is stretched beyond its limit. There is no reason for this film to top out at anything over two hours. I’m sure the theaters would have voted along those lines as well. Bay doesn’t use the time to develop the story or move things very much along. He lingers, and not just on the action shots. It’s true that there’s a lot of waste in a house of plenty. It’s almost as if Bay has totally given up on tight filmmaking. He’s dedicated to making the ride last as long as he can, and I’m not sure it was totally for our benefit. I think Michael still loves playing with his toys and just didn’t want to stop.

Of course, audiences will come for the Michael Bay Bang, and you will get a lot of bang for your twenty bucks. The f/x are amazing. Each film in the franchise has pushed the limits to what can be delivered on the screen. Age Of Extinction is no exception in that department. The human machines transform in a whole new and rather cool way. It’s almost like the original machines transform in analog and now we see what that transformation is like in digital. These machines look more like the Replicators of Stargate than the original Transformers. That’s not all that is stolen from Stargate. Wahlberg ends up with an alien gun that looks exactly like a G’ould weapon complete with retracting sword to pulse rifle. Bay loves to blow crap up, and he does a ton of it in this film. Again, there are moments when he has too much tech at his command. The images become almost an overload. There’s so much more happening on the screen than you could possibly process at any one time. The edits are fast and hide any flaws the f/x might contain.

It’s not just robots, spaceships and explosions in the works here. Bay also loves cars, and there are hundreds of concept-car designs on the road here. There’s more car racing (and crashing) than the entire Fast And Furious franchise. The car companies love the exposure, and Bay gets to preview some forward-looking designs and gets access to all of that fine Detroit engineering.

The new guys here are the cool-looking Dinobots. We get a tease of them very early on, but we don’t see them in action until the last 20 minutes of the film.

The acting is certainly a step up from the original trilogy. Thank God Shia LaBeouf is gone, if just that I hate typing that last name. Mark Wahlberg is a much more down-to-earth character and adds at least a smidgen of realism to the film. Kelsey Grammer is also quite a standout here. He takes this character quite seriously and invests into every scene. I buy him most of all. Let’s face it, Nicola Peltz isn’t here for her acting chops. Still, she was good enough to hang with the guys. Unfortunately, she puts out this “pretty and I know it” vibe that made Meghan Fox such a disappointment. Of course, there was always just watching with the sound turned down. John Goodman provides much of the pun quotient in the film as the voice of the cigar-smoking Hound.

The film takes you on a James Bond-like global tour of exotic locations. Technically, this is a pretty great film. As for the story? The idea actually has some potential and is the natural direction for the franchise. It’s just so full of holes that I get the idea Bay spent most of the pre-production budget blowing up the script. Look, I’m not asking for a lot of story here. I just ask that you keep things a little tighter, particularly if you’re going to demand nearly three hours of my time. This is one movie that could benefit from a Director’s Cut, and I do mean “cut”. With laughable terms like Transformium and the gang that can’t seem to shoot straight, all that we’re left with is carnage…not that that’s a bad thing. I know Bay puts his sweat into the cool stuff, but he’s not even trying to tell a tight story anymore. Maybe it’s time we took away the toys and gave Michael Bay a time out. I have an old Thingmaker he could play with. I assume he has killer medical coverage.

Transformers: Age Of Extinction  is presented in its original aspect ratio of 2.40:1. The Ultra high-definition 2160p  image is arrived at by an HEVC codec with an average bitrate of 75 mbps. Colors are bright and glossy. This is important when you have these cars with candy finishes. The texture really brings out the mud, dirt and rubble during battle scenes. Again this is a surprising area where 4K has excelled so far. With the demise, at least for now of 3D television this is somewhat of a compromise adding great color, contrast and detail with some visual depth. You couldn’t expect things to appear any sharper without really hurting yourself. You’ll get to see all of those geeky details of the transformers themselves. Each and every scratch is quite visible without you having to look for it. It’s a great idea to dedicate the entire disc to the transfer, and the results are nothing short of stunning. The digital blends with the film aspects seamlessly. This is the kind of film you run to show off your gear. Black levels are deep and provide fine shadow definition.

Transformers Age Of Extinction took a special place in home high-definition history. It was the first release to feature a Dolby Digital Atmos track. There aren’t many systems set up for this multi-speaker platform yet. You’ll one day have a ceiling covered with speakers delivering a complete immersive effect. For now it translates into a Dolby TrueHD 7.1 track. Is this thing filled with ear candy, or what? The surrounds are as aggressive as these robots. You are almost constantly surrounded by sounds of unimaginable range. From score to the scraping of metal, it might give you whiplash to try to respond to it all. Dialog remains clear even as the subs are exploding into a presentation that will shake your walls. It’s a Michael Bay film, and there are tons of things going on at one time. Here you’ll manage to pick out almost any aspect you might want. You won’t find a better audio presentation to date even on UHD.

The extras are all on the Blu-ray copy of the film and are the same found in the previous Blu-ray release of the film.

As I predicted, the film raked in hundreds of millions of dollars. That doesn’t make it a good film. Maybe we need one of these to tank to take away some of Bay’s over-confidence. He can do better, and maybe we should start demanding that he do better. Nah. Perhaps we’ve reached a point when the Transformers are “Out of ammo. Out of ideas.”

Gino Sassani is a member of the Southeastern Film Critic's Association (SEFCA). He is a film and television critic based in Tampa, Florida. He's also the Senior Editor here at Upcomingdiscs. Gino started reviewing films in the early 1990's as a segment of his local television show Focus. He's an award-winning recording artist for Omega Records. Gino is currently working on his 8th album Merchants & Mercenaries. Gino took over Upcomingdiscs Dec 1, 2008. He works out of a home theater he calls The Reel World. Favorite films: The Godfather, The Godfather Part II, The Body Snatcher (Val Lewton film with Karloff and Lugosi, not the pod people film), Unforgiven, Gladiator, The Lion King, Jaws, Son Of Frankenstein, The Good, The Bad And The Ugly, and Monsters, Inc.
The Disaster Artist Tuesday Round Up: December 12, 2017