Posted in: Disc Reviews by Gino Sassani on December 13th, 2017 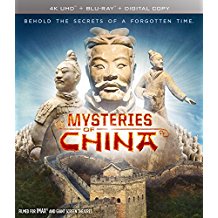 Mysteries Of China appeared in many IMAX theaters across the country and was often titled Mysteries Of Ancient China. That would be a more appropriate term for this exploration into a mystery that is over 2000 years old. These IMAX features make perfect additions to any 4K library. Their short 40-minute running time allows for plenty of space on these 100 GB discs. The source material is also often 70 mm (65mm here) which is natively 8K instead of the usual 2K of most films shot digitally today. That kind of combination offers the opportunity to demonstrate the real promise of the new format. Shout Factory has been in the forefront of releasing these 4K IMAX titles. It’s been several months since the last wave, and I can only hope that Mysteries Of China is the beginning of a new collection of these titles for the 4K home video market.

It was a 1970’s drought that led to one of the most fascinating discoveries in archaeological history. The lack of water meant new wells had to be dug, and one of these digging projects uncovered ancient life-sized terracotta figures of soldiers. In 1974 an underground cavern was discovered that contained rows of over 2000 soldiers and horses that survived the 2000 years nearly entirely intact. As an eerie timeless army, they stand waiting to march at their emperor’s orders. Orders that never came. In 1976 a second cavern was discovered. The film begins with a look at those early digs. We are treated to black & white photographs of the activity, while re-enactments take us through each discovery.

The film is narrated by Deep Space Nine’s steadfast captain, Avery Brooks. The narration takes us from the first discoveries into a bit of history on China 2,000 years ago and Ying Zheng, who unified the vast country and became its first emperor. He is believed to have ordered the construction of the giant terracotta army, although his motivation remains mostly speculation. Reenactments of battles from the period are provided by clips from the 1980’s film The First Emperor. Of course, the “star” of this documentary has to be the footage of the terracotta soldiers themselves. They were once brightly painted, and through the magic of computers we get a glimpse of what they might have looked like when they were newly created. All of these elements combine in a 37-minute presentation that moves along at a nice pace and balances educational moments with stunning photography. Much of this footage includes magnificent flybys of the wilderness of China.

Mysteries Of China is presented in somewhat modified aspect ratio of 1.78:1. The ultra- high-definition 2160p image is arrived at by an HEVC codec with an average bitrate of 65 mbps. The film is at its best when we visit various locations around China. From lush green wilderness to spectacular waterfalls, we get a window into some of these forces of nature. The terracotta statues themselves are now devoid of the colors they once possessed, but it’s the sharpness and detail that allow us to witness just how intricate each of these thousands of statues are. The texture just adds to the realism. Black levels don’t play an important part here, but there is a hint of the kind of shadow definition that would make this about as perfect a video presentation as you can get.

The Dolby Atmos presentation defaults to a utility 7.1 track. The narration is really the main focus of the audio presentation. There are a few small surround moments, most notably falling water during our aerial tour of the country. It’s all quite clear and clean. That’s all you want from this kind of a release.

Behind The Scenes: (10:04) This gives us a nice breakdown of the production. The dealings with the Chinese government are covered as well as the equipment used to shoot the feature.

The story of Ying Zheng himself is a fascinating tale. He was obsessed with attaining immortality and took dosages of mercury in a treatment that he believed would extend his life. Unfortunately, the plan backfired, and it was mercury poisoning that would actually end his life. But he left behind these amazing and enigmatic statues that survive today, granting him a kind of the immortality he spent his life seeking. Instead of a 2000-year-old tyrant, we are left with “architectural wonders”.

Gino Sassani is a member of the Southeastern Film Critic's Association (SEFCA). He is a film and television critic based in Tampa, Florida. He's also the Senior Editor here at Upcomingdiscs. Gino started reviewing films in the early 1990's as a segment of his local television show Focus. He's an award-winning recording artist for Omega Records. Gino is currently working on his 8th album Merchants & Mercenaries. Gino took over Upcomingdiscs Dec 1, 2008. He works out of a home theater he calls The Reel World. Favorite films: The Godfather, The Godfather Part II, The Body Snatcher (Val Lewton film with Karloff and Lugosi, not the pod people film), Unforgiven, Gladiator, The Lion King, Jaws, Son Of Frankenstein, The Good, The Bad And The Ugly, and Monsters, Inc.
Tuesday Round Up: December 12, 2017 Star Wars: Episode VIII – The Last Jedi