Posted in: No Huddle by Gino Sassani on January 4th, 2018 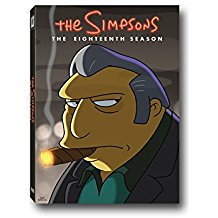 The head of the Simpson family is father Homer (Castellaneta). Homer’s pretty much a moron who happens to run a control panel at the local nuclear power plant. There’s nothing he wouldn’t do for a donut or a Duff’s beer. He happily meanders into the most outrageous situations with really no control over his family at all. Mother Marge (Kavner) loves her family but is usually frustrated by Homer’s mess-ups. She’s the smart one who manages to keep the family together. Son Bart (Cartwright) is a teenage bad boy on a skateboard. Whatever prank there is, he’s played it. He’s lazy and will go to great lengths to get out of work. Daughter Lisa (Smith) must have been adopted, but wasn’t, much to her own disappointment. She’s bright, hardworking, and talented. Too bad she ends up thwarted most of the time by her father or brother. There’s baby Maggie to wind up the family. Homer likes to hang with his friends at Harry’s Bar, where he can relax with a Duff in his natural element. The town of Springfield is populated with all sorts of colorful characters who often weave their lives intricately into the lives of the Simpson clan. Of course, this isn’t news to any of you. Love them, hate them or indifferent, everyone knows The Simpsons.

The 18th season is a milestone year for The Simpsons. It was the year of the feature film. The show has been released recently on home video only with the current seasons. Matt Groening explains that the studio told him discs were dead and there wouldn’t be any of the remaining earlier seasons. We get this in an apology extra on the first disc.

Some of the adventures you’ll find in season 18 include The Mook, The Chef, The Wife And Her Homer which sets the theme for this season’s set with Homer filling in for Fat Tony when there’s an attempted hit while Lisa helps his son live his dream of being a chef. There’s the expected Treehouse Of Horror trilogy, but the format is also used on an episode about revenge. In Revenge Is A Dish Best Served Three Times Homer wants to get even with a driver, but the family tells him three stories where revenge went badly. The season has episodes that spoof Kill Bill and The Sound Of Music with an interesting musical track that sounds like something from South Park … only without the F-bombs. It’s a strong season that finally allows you to start filling that gap in your collection.

Things might be about to change for the Simpsons as they soon will become a Disney property. Fox has tolerated shots at the various Fox properties, particularly Fox News. The show has often taken some good zingers at Disney. Will that be allowed to continue? Those are the questions to ponder as we go back a little in time and relive some classic Simpson moments. “Now who’s ready to sleep with da fishes?”

Gino Sassani is a member of the Southeastern Film Critic's Association (SEFCA). He is a film and television critic based in Tampa, Florida. He's also the Senior Editor here at Upcomingdiscs. Gino started reviewing films in the early 1990's as a segment of his local television show Focus. He's an award-winning recording artist for Omega Records. Gino is currently working on his 8th album Merchants & Mercenaries. Gino took over Upcomingdiscs Dec 1, 2008. He works out of a home theater he calls The Reel World. Favorite films: The Godfather, The Godfather Part II, The Body Snatcher (Val Lewton film with Karloff and Lugosi, not the pod people film), Unforgiven, Gladiator, The Lion King, Jaws, Son Of Frankenstein, The Good, The Bad And The Ugly, and Monsters, Inc.
12 Days Of Christmas Giveaways – Day 11: Win The Boss Baby From Universal Insidious: The Last Key