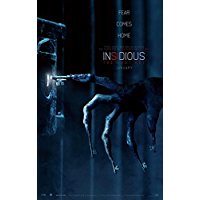 Elise Rainier was the only casualty in 2010’s Insidious, but the character has proven to be impossible to kill. In fact, Lin Shaye’s sympathetic psychic quickly evolved into the main character of this low-budget, high-box office horror franchise. Chapter 2 brought her back in spectral form, while Chapter 3 went back in time to show us an earlier run-in with a restless demon. The Last Key goes even further back in time while simultaneously inching closer to the first film. While the series has pretty much run out of interesting ways to scare audiences, this film does explore the connection between real-life monsters and malevolent spirits.

“I’m gonna ask you again…did you see a ghost?”

The Last Key opens in Five Keys, New Mexico in 1953. That’s where a young Elise (Ava Kolker) lives with younger brother Christian (Pierce Pope), good-hearted mom Aubrey (Tessa Ferrer) and monstrous dad Gerald (Josh Stewart), who works as a corrections officer at a nearby penitentiary. We learn that Elise had her psychic powers at an early age, and she was attuned to the spirits of the men who were executed at the prison. Not surprisingly, her stern father thinks it’s all nonsense and attempts to beat Elise’s gift out of her. One night, a spirit convinces Elise to open a hidden door in the basement, which results in a family tragedy.

The action then jumps forward to present(ish) day in 2010. Elise is an established psychic and works alongside goofy ghostbusting sidekicks Tucker and Specs (Angus Sampson, Leigh Whannell) to help families haunted by nasty spirits. One day, Elise gets a call from Ted Garza (Kirk Acevedo), who is currently living in her childhood home house and dealing with demons of his own. Despite her reservations about returning to her literal house of horrors, Elise is determined to help another person in need. The case also gives her a chance to try and reconnect with Christian (now played by Bruce Davison) and establish a relationship with nieces Melissa and Imogen (Spencer Locke, Caitlin Gerard), one of whom inherited Elise’s “gift.”

The Last Key is a prequel to the first two Insidious films, but also a sequel to Chapter 3. All the films were written by Whannell (who also directed Chapter 3), and The Last Key at least tries to be a little more thoughtful than the typical low-budget chiller. So far, the main antagonist in every Insidious movie has been a spooky demon, but for a while the scariest person in The Last Key is Elise’s abusive dad. The movie explores all-manner of spirits — including the ones that might be trying to help Elise — but I wish it had stuck even more with earthbound evil vs. leaning completely into the supernatural realm. (Which, to be fair, is the franchise’s bread and butter.)

The director this time around is Adam Robitel (Paranormal Activity: The Ghost Dimension), and the movie does include a villain known as Keyface. (Apparently, the thoughtfulness of the script did not extend to the naming of the main demon.) The movie’s best bit involves Keyface using keys — which extend from his hands like fingers — to silence victims and snatch their souls. (I suppose “Keyfingers” sounds even goofier than “Keyface,” even though it’s technically more accurate.) Otherwise, Robitel sticks to the pretty familiar jump scare template of having foolish people bumble around in the dark until something jumps out and yells in their face. At this point, it’s honestly a little more tedious than scary.

Fortunately, Shaye is here to ground the proceedings with another empathetic performance. The actress gets to be both maternal to her “boys” Tucker and Specs while also getting some badass moments whenever Elise stands up to a nasty spirit. (Not too many actresses in their 70’s get to go toe-to-toe with demons on screen.) Sampson and Whannell ramp up the goofiness, and the humor doesn’t always land. However, this movie does the best job of illustrating the affection Tucker and Specs have for Elise and how the trio has formed an endearingly weird makeshift family. The downside with this being a prequel is that we absolutely know nothing too bad is going to happen to the three main characters, which saps a lot of this movie’s tension.

I did, however, like the fact that The Last Key plays a bit with expectations; what would ordinarily serve as the climax for this sort of film occurs with about 45 minutes left to go. And speaking of things that don’t end when you expect them to, the movie’s title suggests this might be the end of this particular iteration of the franchise. Then again, if Elise can have a second (and third…and fourth) life — and if the box office is good enough — I wouldn’t be surprised to see another Insidious flick bust through from The Further. (Maybe focusing on one of the younger Rainiers.)