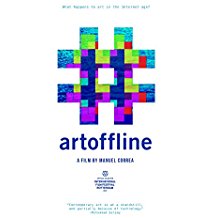 What exactly is the purpose of an art museum? Oftentimes, people travel from all over the world to visit Da Vinci’s “Mona Lisa” at The Louvre or Seurat’s “A Sunday Afternoon on the Island of La Grande Jatte,” spending upwards of $50 on admission only to stand in line for a chance to see. That is just one of many issues covered in #artoffline, a documentary created for the sole purpose of exploring the philosophical questions that arise when thinking of art (physical media) in the digital age.

Drawing upon the expertise of contemporary curators, artists, and philosophers, #artoffline uncovers the anxious questions about art that no one is asking. More importantly, however, is that these questions are being uncovered in an accessible way: the philosophies are explained succinctly at the level of an “every man,” which is very inviting to spectators. What’s more, these ideologies are actually delivered in a way that generates intrigue. You are just sort of thrown into this world of experts, who are very inviting. Artists want you to know about the challenges they are currently facing in the digital age, and this documentary delivers on all fronts.

Just to give you a taste of the topics covered, one of the first ideas brought up in support of museums is the fact that physical media such as paintings, sculptures, drawings, etc., have a very demanding physical presence. It’s one thing to see a digital rendering of the work in a search engine, but for many of these works, scale is one of the most important features. I remember a time during graduate school, I was tasked with selecting and analyzing one of Andy Warhol’s countless screen printings. My choice was “Orange Car Crash Fourteen Times,” which features two canvases, painted orange, side by side. On the right canvas, it is just orange paint and effectively blank compared to the left, which features the same image of a car accident from a newspaper, printed fourteen times onto the canvas. The more I read about it, I realized that the entire piece is about 8’ x 13’, which is gigantic. This single fact changed my entire argument: the painting was immense, and it wanted our attention.

So while physicality is argued as a defense for art in the digital age, the film does offer a strong counterargument for instant access of these works on the internet: exposure. While the iGeneration may be buried in their tiny screens, they have the capability to access a wide array of any form of art online. Yes, the authenticity is not there, but is it not a good thing that the younger generations are showing interest in art, when the very school systems that teach them are having the funding for artistic programs cut? This is most likely why I appreciate this documentary so much: it remains objective throughout, giving wonderful examples and ideas —both for and against — and inserts contemporary philosophers encouraging you to take this information and form your own opinion. That is a rarity these days, and it was a refreshing approach.

In addition to the wonderfully complex arguments, the way they treat the interviewees in the film is very unique. They film the interviewee in their element, but they are not talking. You see a person looking at or away from the camera, surrounded by a museum display or their own work (all amazing to see, by the way). However, as you are watching them, their disembodied voice carries on the interview, as if you were listening to their thoughts. Eventually, they do cut to the actual clip of them talking, but it was really interesting. I have seen that particular style of editing an interview done before, but never to the degree or duration of #artoffline.

It’s difficult to express how important this documentary is. Words can only go so far, so I encourage everyone to find a way to watch this. It is only an hour long, and the content will certainly speak for itself. The future of art production and consumption is in the hands of our youth and #artoffline understands that. Watch this film. Talk about it. Listen to the ideas and form your own. Physical media will never die, but we must understand, respect, and appreciate the ways in which digital media will affect it as it progresses.