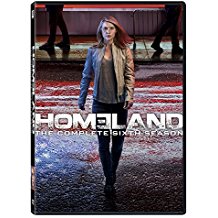 Much of this sixth season of Homeland is spent exploring the notion that the CIA’s cloak-and-dagger activities in the Middle East might have outlived their usefulness and a new course of action is required. But considering that Showtime’s previously white-hot spy drama — a Best Drama series Emmy winner for its stellar first season — is six seasons in and a lot less buzzy these days, it’s hard not to extend that central question to the show itself: Is Homeland obsolete? Well judging by this twisty and thrilling collection of episodes, the answer is a resounding, “No!”

Homeland actually premiered on 2011, a full decade after the most devastating terrorist attack on U.S. soil. The show, an adaptation of the Israeli series Prisoners of War, follows the adventures of Carrie Mathison (Claire Danes), a brilliant and bipolar — the two qualities are inextricably linked — CIA operations officer. Season 6 once again finds Carrie unsuccessfully trying to leave all those spy games behind. After thwarting a terror attack in Germany during season 5, Carrie has moved her young daughter Frannie to NYC and works at a foundation that provides legal aid to Muslims in the city. Through her work in the foundation, Carrie meets Sekou Bah (J. Mallory McCree) a young and charismatic Muslim who is targeted by the FBI as a potential terror threat. (Sekou insists the farthest he goes is posting provocative videos online, which is his First Amendment right.)

But try as she might to leave her previous life behind, Carrie continues to deal with the consequences of her past actions. In her rush to stop the attack in Berlin, Carrie compromised the health of close friend and badass CIA operative Peter Quinn (Ruper Friend), whom she prematurely woke from a medically-induced coma in order to extract key information. Now Quinn is a shell of his former self, suffering severed psychological and physical damage. Carrie also rejected an offer from mentor/father figure Saul Berenson (Mandy Patinkin) to return to the CIA fold after her heroics in Germany. Now Saul and shadowy colleague Dar Adal (F. Murray Abraham) have to contend with President-elect Elizabeth Keane (Elizabeth Marvel), who severely questions the CIA’s purpose and effectiveness in the Middle East. But since this is Homeland, potential new threats (in)conveniently pop up both abroad and domestically, which puts Carrie, Saul, Dar and other key players on a collision course.

I continue to be thoroughly impressed with Homeland‘s ability to reinvent itself each year following the conclusion of the Nicholas Brody saga, which served as the heart of the show during seasons 1-3. (Damien Lewis formerly starred as the war hero/suspected terrorist.) It shouldn’t be totally surprising, since Homeland co-creators Howard Gordon and Alex Gansa previously worked together on Fox’s 24, another counterterrorism drama that had to practically reboot itself every year.

Given the show’s themes and the fact that it has always embraced what it means to live in a post-9/11 world, I’m surprised it took this long for an entire season to be set in New York City. The show takes full advantage of filming on location (see Special Features below), showcasing both the city’s corridors of power and the outer boroughs that round out NYC’s character. But there’s more to the success of season 6 than a change of scenery.

There are 12 episodes in this sixth season, and they can mostly be broken up into three quarters. The first four episodes do a great job of establishing where everyone is on the chessboard and conclude with a literal bang at the end of Ep. 4/“A Flash of Light.” That kicks off some high-octane action with Ep. 5/“Casus Belli,” which features a tense and violent standoff in Carrie’s own home(land). Meanwhile, the final four episodes  put a bow on this season’s story while laying the groundwork for a more insidious threat going forward.

It all works because the cast and production values are absolutely top-notch. The show’s writers keep the twists and turns coming in each section of the season, but it’s the performers who really help sell it. Danes’ ability to cry on cue has become something of a parody at this point, but the actress remains a capable and confident center for this show. Carrie is nominally the hero of her show, but she’s not above lying to/using her closest friends or bending the law to do what she feels is right.

Patinkin continues to be outstanding as Saul becomes more overtly frustrated and emotional than we’ve seen him in past seasons. But it’s Oscar winner Abraham who rises to the challenge, as Dar Adal takes his shiftiness and duplicity to a new level. I actually feel like the writers went a step too far in making Dar out to be a villain — specifically when we learn something about his past connection with Quinn — but it’s only because Abraham’s delicious shadiness already got the point across on its own. Meanwhile, Friend has his greatest challenge thus far playing a damaged version of Quinn; the actor does a good job of conveying that a lot of Quinn’s old instincts are still rattling around in his broken body.

The biggest letdown is Marvel as Madame President-elect Keane, who talks a big game but turns out to be a surprisingly toothless leader. It’s a crucial role, and Marvel’s performance isn’t commanding enough to make up for writing that doesn’t do the character many favors. By the time her arc becomes more emotional — the death of Keane’s war hero son is scrutinized — we’re not invested enough in the character to care.

Fortunately, there’s more than enough thrilling material in this sixth season — including the brief return and tragic, infuriating death of recurring character — to keep us viewers on the edge of our seats.

Homeland: The Complete Sixth Season is presented in its original aspect ratio of 1.78:1. The 1080p image is arrived at with an AVC MPEG-4 codec at an average of 19 mbps. Season 6 is set almost entirely in New York City — the exception is a sunny, sandy detour to the Middle East for Saul — which means the series retains much of the grayer urban palette established during the previous season’s foray into Germany. The move to NYC, however, adds a bit of grit since much of the action takes place in and around Carrie’s Brooklyn neighborhood and other less glamorous parts of the city. That being said, the series showcases some stunning shots of the city’s skyline, which come in razor sharp despite occupying the background. That level of fine detail — for closeups, medium shots, and panoramic views — is the standout feature in this impressive presentation. Black levels also offer great separation, which is especially useful during Quinn’s tense nighttime faceoff with a killer by a lake.

The DTS-HD Master Audio 5.1 track has a lot to live up to, given the knockout visual presentation on this disc. Although this track is very solid, it doesn’t quite there. Simply put, I didn’t get the same level of vibrancy and activity from the surround speakers that I would expect from the show’s move to New York City. Don’t get me wrong: I don’t need constant street noises and shouting in the rear speakers, but a lot of the surround activity focuses on show’s signature jazzy score rather than atmospheric noises that might immerse the viewer in the action. That being said, fidelity is absolutely spot on, dialogue is always crystal clear, and the track delivers a wallop when the time is right. (Carrie’s door being busted down, or a game-changing van explosion.)

On Location — New York City: (2:10) Star/producer Claire Danes talks excitedly about returning to her hometown to film the show. Homeland shot a good amount of scenes in the outer boroughs, and the cast and crew show appreciation for the authenticity that NYC lent the series.

About Season 6: (2:58) A quick recap of the conclusion of season 5 followed by a sneak peek at the episodes in this set. This is a spoiler-free zone.

The Paley Center for Media Q&A with Cast and Creative Team from PaleyFest NY 2016: (55:36) Stars Danes, Mandy Patinkin and F. Murray Abraham, director Lesli Linka Glatter and co-creator Alex Gansa take part in this extensive panel moderated by Josh Elliott. Gansa talks about walking a political tightrope with the show’s audience since Homeland gets slammed by both the right an the left. They also talk about all the ways the country’s political climate shifted between the time the episodes were filmed and when they aired. (Let’s just say the character of Madame President-elect Keane was probably created when it looked like the U.S. was getting its first female president.)

Homeland: The Complete Sixth Season features all 12 episodes on three discs. Season 7 is already underway, so I’ve got to wrap up this review so I can run and catch up.

This set is absolutely worth a look for the top-notch visual presentation and the intriguing PaleyFest panel.