Posted in: The Reel World by Brent Lorentson on March 16th, 2018 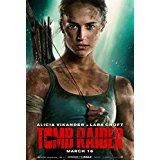 For some reason, adapting videogames into good films has been the nut Hollywood just can’t seem to crack. The Resident Evil series has been successful, but I wouldn’t say it really holds up to the game. Personally, Silent Hill has been the only adaption I’ve really enjoyed, and that film has divided fans as well. As for the Tomb Raider franchise that kicked off in 2001, sure it had some fun sequences. And with Angelina Jolie becoming a hot commodity at the time, it’s not too much of a surprise that it did well at the box office. Now 17 years later, the time has come for Tomb Raider to get a makeover and work its way through the reboot machine. This is a reboot, though, I don’t mind; after all, the videogame gave its featured character a makeover and decided to tell the story of a much younger Lara Croft. As for the film, how did it do as it followed the game’s footsteps by casting a younger actress to fill the role?

Tomb Raider is kind of a big deal for Warner Bros. Sure, they kicked in a lot of money for this film but, more importantly, this was obviously a potential tentpole franchise that they hoped to squeeze several sequels out of. Because of the franchise potential, it is no surprise that they would cast a younger talent for the role of Lara Croft, and for me Alicia Vikander is great choice. For those unfamiliar with Vikander, I simply can’t recommend Ex Machina enough. Is she Angelina Jolie? No, but that’s okay; times have changed and, instead of sexualizing the role, we get a more grounded and relatable take on the character.

Seven years have passed since Lara’s father (Dominic West) went missing while attempting to find the tomb of Himiko — “the Mother of Death” — and Lara has grown to be a fiercely independent woman. Rather than living off her father’s fortune, she struggles as a bike courier in London where she manages to get herself into a bit of trouble with the authorities after a biking mishap. It’s during a visit to her father’s office to sign over the business that she is handed a puzzle box that was expected to be given to her as part of her father’s will. The puzzle is a piece of a clue that will lead Lara to what her father has been obsessing over for years. While this portion of the story isn’t bad, it simply feels generic; we’ve seen it all before, but thankfully things begin to pick up once Lara decides to try and find her father.

One thing that comes across in the film’s style is that it does feel as though we are watching a videogame. Whether it’s a bike chase through the streets of London or a foot chase along the crowded docks of Japan, it feels as though we are watching someone play a videogame as they seem to level up with every sequence that moves the story along. There are even sequences in the movie that are lifted right out of the game, one of which has Lara encountering a waterfall.

The villain of the film is Mathias Vogel, played by the great Walton Goggins. Every role this guy takes he manages to make his own, and it’s his presence that makes this character a formidable foe. Vogel works for a mysterious group that searches for paranormal artifacts, and he has been stuck on an island for seven years, unable to leave until the tomb of Himiko is found. My biggest problem with the film is that when it gets to the island it begins to feel all too familiar. It’s one thing to be inspired by Indiana Jones but it is another when it seems to be recreating moments out of The Last Crusade. What’s even more frustrating is that once Tomb Raider enters its third act, the film seems to lose its focus on developing Lara as a strong-willed heroine and simply makes her a generic reactionary character. We don’t get to see her brains or brawn…she’s just kind of there.

The film is directed by Norwegian filmmaker Roar Uthaug, who made the very entertaining adventure The Wave in 2015. For his first American film, Uthaug shows he has a firm grasp on the expected action beats, but this needed to be something more. Even the scenes with Lara interacting with her father in flashbacks just fell flat for me.

At the end of the day, Tomb Raider is brainless fun but a far cry from what it could have been. As a videogame adaption, this is still one of the better ones. But ultimately it’s a film that is going to get lost in the shuffle of other blockbusters in the upcoming weeks.

Brent Lorentson is a horror writer and film critic based out of Tampa, Florida. With a BA in Digital Film, he co-wrote and co-directed Scavenger Hunt. His short stories have appeared in various horror anthologies. In 2019 his short script Fertile Blood will be a part of the anthology horror film Slumber Party. He is currently working on his first novel A Dark and Secret Place set to be released in late 2019. Favorite Films: Taxi Driver, Fight Club, I Saw the Devil, The Wild Bunch, Dawn of the Dead, A Clockwork Orange, Pulp Fiction, Heathers, The Monster Squad, and High Fidelity.
Curb Your Enthusiasm: The Complete Ninth Season Lady And The Tramp: Signature Collection (Blu-ray)