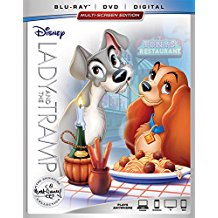 The yesteryears of Disney were full of classic movies, from Aladdin to 101 Dalmatians. Each of those films holds a special place in my heart due to its warmth and very colorful, cute story. Having never seen Lady and the Tramp before picking up this early copy, I didn’t know what to expect of the film. Many declare it to be one of Disney’s best, which is certainly a remark that is quite distinguished. Would Lady and the Tramp capture my emotions and heart like so many old, classic Disney films did years ago? Read on to find out.

The basic story to Lady and the Tramp is as follows. A man named Jim Dear gives his wife Darling a mysterious box for Christmas. Inside that box is the ever-so-cute little cocker spaniel puppy, which Darling decides to name Lady. Lady spends most of her period growing up with two neighborhood dogs, Trusty and Jock. One day a dog named Tramp walks over the railroad tracks. When Darling has a child, we are introduced to two super ugly and vicious cats, Si and Am, courtesy of Aunt Sarah. Due to these evil cats and the new baby, Lady winds up in the doghouse. What happens next is cinematic history: the spaghetti scene and the start of a romance between Lady and Tramp.

As per old classic Disney films, we are treated to a film full of lovely little tunes. I found myself rather enjoying the tune Bella Notte sung during the infamous spaghetti scene. While I didn’t enjoy a majority of the rest of the songs as I usually find myself doing with older Disney films, I still did find them a lot better than anything musical Disney has done in quite some time.

This is not your typical Disney film like 101 Dalmatians where we had a dog-driven story, but we still saw a lot from the human perspective. Lady and the Tramp is more focused on the adventure from the dogs’ point of view. And this is where the film’s charm and shine come through so easily. Lady and Tramp are so beautiful to look at (mostly due to the picture quality) that I found myself getting emotional in some scenes, finding myself amazed that I had never experienced the quality of this film before.

While Lady and the Tramp is not Disney’s best effort, the film is still so simple and enjoyable that anyone can sit down and spend 75 minutes enjoying themselves.  Hopefully Disney will return to the days of old, as the films they made are classics, including Lady and the Tramp.

Lady and the Tramp is presented in its original aspect ratio of 1.55:1. The 1080p image is arrived at with an AVC MPEG-4 codec at an average 37 mbps. Disney hires the best of the best to restore their classics to take them to a new level. It is evidently clear that Disney has done this. The image is so beautiful to look at with sharp colors, absolutely no grain, and zero edge enhancements. In short, this is one of the best transfers Disney has ever done.

The DTS-HD Master Audio 7.1 is just as spectacular. The real highlight of the track is, no real surprise, the musical performances, which sound lovely. Rear channels bring us colorful tunes, while the center channel delivers simple dialog.

There are three ways to watch the film. There is the standard theatrical version (with improved audio), Sing-A-Long (which provides lyrics so you can sing the songs) and Inside Walt’s Story Meetings (which provides a recreation from transcripts of Disney’s various meetings with animators during the film’s production).

Diane Disney – Remembering Dad: (7:51) HD The daughter of Walt talks about her father. The piece focuses on the private apartment he kept above the fire station inside of Disney World.

Walt And His Dogs: (8:27) This feature contains portions of interviews of Walt talking about the various dogs he had. They are from 1956 and feature some of daughter Diane. There is also a collection of vintage photographs of the Disney family and their dogs.

Stories From Walt’s Office: (6:02) When Walt Disney died, the company sealed his office suite so that a complete inventory and placement map could be made. Years later the office was restored to its condition the day of his death, down to the number of paperclips in a cup. This feature takes us on a tour of the restored office.

How To Make A Meatball And Other Fun Facts: (9:06) This is a trivia feature hosted by Alexys Gabrielle of The Oh My Disney Show. The trivia is supplemented by a teen chef who shares her meatball recipe. It’s not a good one. And I know from meatballs, trust me.

Deleted Scenes: (19:11) There are three, presented as narrated storyboards.

Lady and the Tramp is such a charmingly beautiful film to watch and to simply look at. It has been released before, and this is an identical transfer from that release with a couple of nice sentimental new features. Decide on purchasing it based on those extras. Plenty of fans have several copies of the film already, and many will jump on this edition as well. Now, “that’s amore”.

Gino Sassani is a member of the Southeastern Film Critic's Association (SEFCA). He is a film and television critic based in Tampa, Florida. He's also the Senior Editor here at Upcomingdiscs. Gino started reviewing films in the early 1990's as a segment of his local television show Focus. He's an award-winning recording artist for Omega Records. Gino is currently working on his 8th album Merchants & Mercenaries. Gino took over Upcomingdiscs Dec 1, 2008. He works out of a home theater he calls The Reel World. Favorite films: The Godfather, The Godfather Part II, The Body Snatcher (Val Lewton film with Karloff and Lugosi, not the pod people film), Unforgiven, Gladiator, The Lion King, Jaws, Son Of Frankenstein, The Good, The Bad And The Ugly, and Monsters, Inc.
Tomb Raider (2018) Tuesday Round Up: March 20, 2018