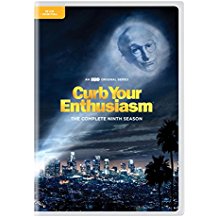 “I was just trying not to offend you and yet I wound up offending you, which is quite ironic.”

Six long years passed between the last Curb Your Enthusiasm episode in 2011 and the show’s season 9 premiere last fall. And yet it only takes about two minutes for Larry David — the curmudgeonly comic genius who stars as an exaggerated(?) version of himself on the long-running HBO sitcom — to utter the words above after inadvertently offending his latest unsuspecting victim. In other words, even though portions of this season feel creakier than past years, it is absolutely great to have Curb back!

It was only a matter of time before Larry’s status as a social assassin landed him in some serious hot water. Season 9 begins with Larry excitedly announcing that he has completed a musical called Fatwa! based on the life of Salman Rushdie. During a television appearance to promote the new project, Larry does an impression of the Ayatollah…which results in a fatwa being issued on Larry. Fearing for his life, Larry adopts the name Buck Dancer and starts wearing a ridiculous wig and mustache to hide his identity…at least until a fateful and eye-opening encounter with Salman Rushdie himself in Ep. 3/“A Disturbance in the Kitchen.”

But even though Larry’s life is ostensibly in danger throughout the season, he still finds plenty of time to terrorize his circle of friends. Larry is particularly offended when Ted Danson (Ted Danson) asks permission to date his ex-wife Cheryl (Cheryl Hines). Meanwhile Larry’s long-suffering manager Jeff (Jeff Garlin) continues to be berated by his wife Susie (the regally profane Susie Essman) to the point that it eventually puts a serious dent in Jeff’s wallet. The real victim, however, is Marty Funkhouser (Bob Einstein), who loses a beloved nephew thanks to Larry’s incessant meddling. On the bright side, eternal houseguest Leon Black (J.B. Smoove) continues to be the funniest person on this show, despite barely leaving Larry’s palatial home in season 9.

Curb is still almost entirely improvised, with regular cast members and guest stars receiving (at most) a vague outline of what a scene is supposed to be about. That’s why it’s a special treat whenever Smoove can make the cranky, incredulous David openly crack up in the middle of a scene. (You can watch David almost break character in Ep. 4/“Running with the Bulls.”) There’s also a nice little treat for longtime Curb fans towards the end of Ep. 8/“Never Wait for Seconds!”: without spoiling too much, a roster of memorable bit players from past seasons show up to vouch for Larry’s (lack of) character. The sequence is pretty reminiscent of the (in)famous finale for Seinfeld, which David co-created.

But while there are certainly some inspired bits and observations that hit the mark — Is it ever ok to honk at a slow poke cop car? Is it ever NOT ok to thank veterans for their service? — too much of the material feels like it went stale after sitting in David’s idea drawer for six years. (The notion that Larry would start telling people that he’s on the autism spectrum to excuse his abhorrent behavior feels like it’s at least 4 or 5 seasons too late.)

The good news is this show has engendered more than enough goodwill to overlook a couple of duds. That goodwill extends to this season’s guest star roster, which includes Rushdie (extolling the virtues of “fatwa sex”), Elizabeth Banks (as a version of herself who is turned on by Larry’s fatwa pixie dust), Bryan Cranston (reminding us that his comedic skills are criminally underutilized these days as Larry’s truffle-loving therapist), Lin-Manuel Miranda (the Hamilton mastermind is recruited to star in Fatwa!…and is apparently bad at “Thank yous”), F. Murray Abraham (starring as himself in Fatwa! …and possibly recycling an outfit).

Season 9 gets off to somewhat of a slow start — the early standouts are Eps. 3 and 4 — before finishing strong with Ep. 9/“The Shucker” and Ep. 10/“Fatwa!” The finale, in particular, is a tour de force that features full Fatwa! musical numbers, a distractingly busty sign language interpreter, and a duel.

Curb Your Enthusiasm: The Complete Ninth Season features all 10 episodes on two discs. Special features include “Deleted Scenes” and “Cast Memorable Moments.” Shortly after these episodes finished airing late last year, HBO announced that Curb had been renewed for 10th season. Production is slated to begin soon, so maybe we won’t have to wait another six years this time around.

That actually makes sense if you consider season 9 something of a warm up that allowed David and Co. to get their comedic legs under them again. It’s exciting to know the Curb team is already excited to do more episodes. In the meantime, there are definitely plenty of moments to enjoy in this set. These episodes may not be great, but they are (I’m contractually obligated to do it) “pre-tty, pre-tty, pre-tty good.”