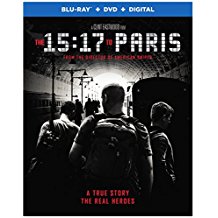 Clint Eastwood has been at the top of the game both as an actor and a director, often both at the same time. There’s no question that he still has the skills. Unfortunately, 15:17 To Paris isn’t a great example of his direction skills. Don’t get me wrong. There is a nice intense film in here, but it only lasts for about 10 minutes and hungrily screams out for more of the same. Eastwood’s problem is much the same that he had in Sully. He doesn’t really have enough material for a truly great feature film, so he is forced to fill the screen time with something he hopes will entertain us long enough to stay with him for the good stuff. But as Clint said once as Dirty Harry, “A man’s got to know his limitations.”

On August 21, 2015 a terrorist boarded a bullet train to Paris in Amsterdam. He carried several weapons including an automatic rifle with over 300 rounds of ammunition, enough to take out nearly all of the passengers on that route.  He didn’t get very far because of the heroism of some of the passengers aboard. Three of the passengers were friends taking a cross-continent backpacking trip in Europe. Anthony Sadler, Spencer Stone, and Alek Skarlatos had been friends since childhood. They were instrumental in stopping the terrorist before he could cause too much damage.

We’ve all seen films based on true stories before. Often some of the real-life players have cameos in the films as a way to honor the actual person and serve as a connection to the real story. Clint Eastwood took that idea a huge step farther. The three American heroes actually play themselves throughout the film. It was certainly a brave choice, and it’s hard for me to be very critical of the jobs they do here. These are real honest-to-goodness heroes; they didn’t just play them in a movie. They demand a great deal of respect. But they aren’t trained actors, and it certainly shows in the film. I’ll give Eastwood credit for keeping the performances from being complete disasters, but these guys look like they’re remembering lines, which, of course, they are. I admire the risk and the sentiment behind the choice, but it stands out pretty badly. It was likely asking too much to have expected more. And I think the film might have been OK even with the poor performances. The supporting cast isn’t made up of any heavy-hitters, so that we don’t have as huge a gap in delivery that we could have. The problem is that the film is also terribly unfocused and wants these non-actors to carry a burden they truly were not prepared to carry.

The film starts with some scenes that show us how these three met as children. They found a lot of trouble at school, and the single mothers are struggling to keep them in line. There’s more than a little religious material at work here, and these scenes get a bit heavy-handed at times. Still, they do serve a purpose, if they took a bit too long serving such. Most of the film deals with the friends making their way through mostly Italy and Amsterdam. We get clever flashes of the drama to come and a bit too much narrative that these characters are headed toward some kind of a destiny. While much of the film is about faith, Eastwood appears to have lost his long-standing faith in his audience. He didn’t trust us to get any of this, and one feels a bit patronized by mid-film. I loved the scenes from Italy particularly, but it’s not going anywhere fast enough. It’s like a travelogue that gets momentarily interrupted by snippets of drama. It’s like Eli Roth’s Hostel films without the torture porn. This is what I mean when I say that there’s not enough actual material here, and Eastwood has to fill. Even with all of that fill, this is one of Eastwood’s shortest films as a director at 94 minutes.

15:17 To Paris is presented in its original aspect ratio of 2.40:1. The 1080p image is arrived at with an AVC MPEG-4 codec at an average 30-35 mbps. The high-definition image presentation is quite ordinary until we reach Europe. The Italian locations stand out with nice sharpness and some beautiful cinematography. Otherwise there is a documentary feel that is somewhat reinforced by using the actual people. Black levels are average but almost never really come into play. Most of the film is well-lit and doesn’t require much from any kind of shadow definition.

The Dolby Atmos defaults to a 7.1 presentation. I’m not even sure why the film was released with a 7.1 surround track. There isn’t much going on in the surround speakers. This is a very simple audio presentation, which is a trademark of Clint Eastwood films. The dialog is served fine, and the score is usually just a solo piano or acoustic guitar. As always, Eastwood gets a lot of emotion out of these simple elements, and that’s all that was needed from this audio track.

Making Every Second Count: (8:11) The real participants/actors provide us with a blow-by-blow account of the events on the train. These recollections are punctuated by the corresponding clips from the film.

Portrait Of Courage: (12:27) This is the more traditional making-of feature with cast and crew interviews and some behind-the-scenes footage. There’s a focus on the casting process that began in the more traditional path but was eventually changed to use the actual people. There’s also some nice footage using the real train and the logistics that shoot involved.

Eastwood was also limited by some legal issues regarding the terrorist and the actual train scenes. What we see is strong stuff, to be sure, but there is little of it. Because of the legal issues, we get a weak villain here. One that doesn’t do the real heroics enough justice. We see none of the terrorist’s planning or motives. He’s about as bland and lacking any kind of motivation as it gets. He’s a faceless, cardboard entity that only incites emotion from the weapon he’s carrying and the horror we know he hopes to achieve. We don’t even know enough about him to hate him in the way we should. In the end, it cheapens the acts and makes them appear less than they obviously were. Perhaps it was just too early to tell this particular story. “Don’t try to take any shortcuts.”

Gino Sassani is a member of the Southeastern Film Critic's Association (SEFCA). He is a film and television critic based in Tampa, Florida. He's also the Senior Editor here at Upcomingdiscs. Gino started reviewing films in the early 1990's as a segment of his local television show Focus. He's an award-winning recording artist for Omega Records. Gino is currently working on his 8th album Merchants & Mercenaries. Gino took over Upcomingdiscs Dec 1, 2008. He works out of a home theater he calls The Reel World. Favorite films: The Godfather, The Godfather Part II, The Body Snatcher (Val Lewton film with Karloff and Lugosi, not the pod people film), Unforgiven, Gladiator, The Lion King, Jaws, Son Of Frankenstein, The Good, The Bad And The Ugly, and Monsters, Inc.
Gunsmoke: The Thirteenth Season, Volume One & Two Game Night (Blu-ray)