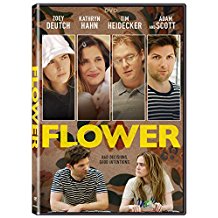 “I just need you to not freak anybody out tonight.”

Flower ends up being a pretty strong reflection of its promiscuous protagonist: both the movie and the anti-heroine at its center are sharp, profane, a little all-over-the place, and contain a surprising undercurrent of emotion. The movie is a polarizing experience, to be sure, but I enjoyed going on this particular wild, unpredictable ride.

“I deal with these sleazebags on the reg. I know what goes on in this town behind closed doors.”

When we first meet 17-year-old Erica (Zoey Deutch), she’s in what we come to learn is a pretty familiar position: in the company of a much older man — in this case a sheriff’s deputy Dale (Eric Edelstein) — whose pants are undone. Turns out Erica is in the habit of getting these older men in compromising positions so her friends (Dylan Gelula, Maya Eshet) can record the encounters, which allows them to blackmail the sleazebags. Erica has free reign to do all this because her immature, irresponsible mom (Kathryn Hahn) is currently more worried about keeping her dorky new boyfriend Bob (Tim Heidecker) around.

Erica’s life is disrupted when she learns that Bob’s troubled son Luke (Joey Morgan) is set to come live with her and her mom after a stint in rehab. At first, Erica is put off by Luke’s overweight body and surly demeanor, but the two stepsiblings start to form a connection. That bond becomes stronger once Luke reveals a past trauma involving an attractive guy named Will (Adam Scott) that Erica already had her eye on. As a result, Erica decides to make Will her next target.

Flower is the sort of movie that makes me feel like I’ve already said a bit too much, so I’m certainly not going to reveal any more about what happens next. I will say the movie contains surprisingly layers to what, on the surface, appears to be completely abhorrent behavior. For example, we learn Erica’s motivation for blackmailing those older guys goes beyond putting perverts in their place. There’s also the notion that Luke, who is described as a pathological liar, might not be entirely trustworthy.

The director here is Max Wrinkler (yes, Son of the Fonz), who also triple-teamed the script with Alex McAulay and Matt Spicer. The trio has a strong ear for the caustic, cutting way a certain subsection of teens chat with each other. The movie works best as a pitch black comedy, which makes the swerves into sentimentality and (un)conventional romance feel somewhat off.

The entire thing is buoyed by a forceful performance from Deutch, who makes Erica seem both wise beyond her years and like a total brat. She doesn’t make the character likable — Erica is *supposed* to be a selfish, impulsive pill — but Deutch makes her a compelling guide through this film. She has such strong, spiky chemistry with Scott (particularly during their first grocery store meet) that you totally buy there’s a mutual attraction there. On the other hand, her scenes with Morgan are effective for the opposite reason: if Erica and Will seem like sarcastic soulmates, then Luke (thanks to Morgan’s underplaying the character to contrast Deutch’s aggressive energy) and Erica are evidence that opposites attract.

Elsewhere, Hahn is terrific as an objectively bad mom. As soon as she appears on screen with her infantile wardrobe and overly friendly interactions with Erica, the character is instantly recognizable as the sort of mother who’d rather be her kid’s pal than parent. Hahn also shines towards the film’s final act when things get serious and Erica’s mom has to lay down some hard truth. Heidecker makes for a perfect square as Erica’s would-be stepdad. And even though they were smaller performances, I enjoyed the chemistry Erica had with her two callous, dim-witted friends. (I especially enjoyed Eshet’s deadpan line readings as the ineffective, wannabe conscience of the group.)

Flower packs a lot of twists and turns into its 93-minute running time. Not all of them work, but this crazy story is told confidently and with flair, which makes a lot of the toxic behavior on screen go down more easily.