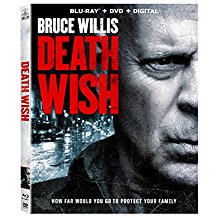 “People rely on the police to keep them safe. That’s the problem.”

Paul Kersey (Bruce Willis) has it all. He’s a successful, emergency room trauma surgeon living in Chicago with a loving wife (Elisabeth Shue) and college-bound daughter (Camila Morrone). That all comes crashing down after Paul’s family is brutally attacked in their home. As devastated as Paul is by attack, he initially places his faith in the two detectives (Dean Norris, Kimberly Elise) investigating the case. But when it becomes clear the overtaxed cops stand little chance of bringing the attackers to justice, Paul takes matters into his own hands.

After acquiring a handgun through questionable means, Paul dons a hoodie and takes to the streets searching for his wife’s assailants. Along the way, he stops several crimes and starts to gain notoriety. Half the public considers him a guardian angel, while the rest dub him a “Grim Reaper.”

“I know it’s a process. I’m just starting to wonder about the result.”

To be clear, there is absolutely no question on which side of the debate the people behind this remake land on. With Roth at the helm, this re-imagined Death Wish is a gleeful revenge fantasy. I’d stop well short of calling Death Wish a full-on comedy, even though the film does play the scene where Paul discovers how easy it is for someone like him to buy a handgun for laughs. There’s a pulpy, over-the-top tone bubbling beneath the surface throughout, most notably during a laughably elaborate kill involving a bowling ball. The most notable exception is the tense assault on Paul’s family, which is effectively staged like a horror movie home invasion. Roth also shows remarkable restraint in actually showing us the attack on Paul’s wife and daughter; anyone who’s seen the director’s work knows he’s not shy about brutalizing women on screen. (In fact, I believe the working title for Hostel: Part II was I’m Not Shy About Brutalizing Women.)

It’s no spoiler to say that the movie’s bad guys are the recipients of the bloodiest, squishiest, and most satisfying kills. Part of the problem is the glee with which Roth stages all this action feels somewhat tone deaf when you consider the high-profile instances of gun violence in real life. Of course, Hollywood will never stop pumping out violent, wannabe-escapist entertainment. So the bigger issue with Death Wish is that Roth’s hokey tone doesn’t mesh well with the straightforward presentation here. In other words, this new Death Wish looks and sounds like a serious movie, but there’s absolutely nothing about it that should be taken seriously.

Willis has sadly become a charmless screen presence in recent years, but he’s actually a solid choice for this remake on paper. In the original film, which was based on Brian Garfield’s 1972 novel of the same name, Charles Bronson’s hero was an architect. Making Paul a surgeon — so the character goes from saving lives to taking them — was a nice touch. And Willis, who became a movie star based on his everyman appeal in Die Hard, has the necessarily quality to portray an ordinary citizen who was wronged. Unfortunately, Willis is acting in a far more serious movie than Roth is making, which results in a stoic, disconnected performance. (It’s the same disconnect that pulses throughout the rest of the movie.)

The rest of the cast doesn’t leave much of a mark. Vincent D’Onofrio had potential as Paul’s wiseguy, screw-up brother, but is largely underused. I did enjoy Norris’ friendly, patient presence here: after years of being duped on Breaking Bad, the actor has plenty of experience playing a law enforcement agent who is a couple steps behind our antihero. We don’t really get to know much about the attackers, but that’s sort of the point: the real bad guy in the movie is the process that lets them get away with their brutal behavior.

I will say this new version of Death Wish did a decent job of incorporating some modern touches. Paul’s profile as the Grim Reaper is raised after his exploits are capture on a smartphone and posted online. (He amusingly becomes a meme.) It proves that updating Death Wish is a worthwhile idea, even if the timing with this particular version turned out to be way off.

Death Wish is presented in an aspect ratio of 2.40:1. The 1080p image is arrived at with an AVC MPEG-4 codec at an average of 37 mbps. The movie, which is set in Chicago but was largely filmed in Montreal, has a subtle, steely blue palette after tragedy strikes Paul’s family. Prior to that, there are actually some aggressively warm and sunny moments, which do a good job illustrating that the main character had the perfect, idyllic life…before it was snatched away. Overall, this is an exceedingly clean presentation, which is not totally a compliment in this case: I was expecting a Death Wish remake to produce more grit and muck than the slickness we get here. Black levels are nice and inky, which is particularly important for the Grim Reaper’s nighttime activities and to maintain order during a chaotic sequence in a nightclub.

The DTS-HD Master Audio 5.1 track explodes into your living room immediately; the movie opens with sirens blaring and a police car rushing to the emergency room where Paul works as a trauma surgeon. The sequence — which features activity and movement through every corner of the surround sound field — establishes the dynamic template for what follows. Not surprisingly, that includes gunshots…and lots of them. The subs help add an extra oomph, but there’s also a strong sense of direction as shots can be heard originating from one speaker and landing with a ping in one of the rears speakers. The bottom end also gets a nice workout thanks to Ludwig Goransson’s moody score.

Commentary with director Eli Roth and producer Roger Birnbaum: The duo met while working on this movie: Birnbaum talks about spending 7 years trying to get the remake off the ground, but it’s Roth who does most of the talking. The director is an enthusiastic tour guide throughout, whether he’s breaking down one of the movie’s kills or talking about all the pizza the cast and crew consumed in Montreal during production.

Deleted Scenes with Optional Commentary by Eli Roth and Roger Birnbaum: (6:10) There are four inessential scenes, including one that gives Vincent D’Onofrio a bit more screen time and another that reinforces the notion that the detectives (Dean Norris, Kimberly Elise) are solid, overwhelmed cops. Honestly, the best part is Birnbaum chiming in with an exasperated, “I told you not to shoot this!” during an extended sequence of Paul grieving. The disc doesn’t give you the option of selecting individual scenes; instead, they’re all clustered together under the menu’s “Deleted Scenes” entry.

Mancow Morning Show Extended Scenes: (3:39) An extended version of the radio segments that are sprinkled throughout the film as the Grim Reaper gains notoriety. (Host Erich “Mancow” Muller is relatively pro-Reaper.)

Sway in the Morning Extended Scene: (2:51) On the other hand, Sway is decidedly anti-Reaper. Both Mancow and Sway play the Grim Reaper stuff totally straight, and it makes for a convincing radio show debate.

Vengeance & Vision — Directing Death Wish: (11:44) Director Eli Roth calls Death Wish a “grounded superhero movie,” which tells you where his head was at and that (despite appearances) none of this was meant to be taken seriously. Includes cast and crew comments along with a closer look at the story’s themes and the movie’s set pieces.

Grindhouse Trailer: (2:02) An intentionally ragged-looking and pulpy preview for the movie, complete with over-the-top voiceover. As far as fake Eli Roth grindhouse trailers, this is still behind Thanksgiving for me.

The movie is not nearly as bad as its 18% Rotten Tomatoes score would suggest. I do wonder if I would’ve reacted to it differently if I’d seen it in theaters instead of having several months’ worth of distance to appreciate it for what it is, a pulpy, mindless action flick that is meant to entertain by appealing to our less-than-savory thirst for justice.